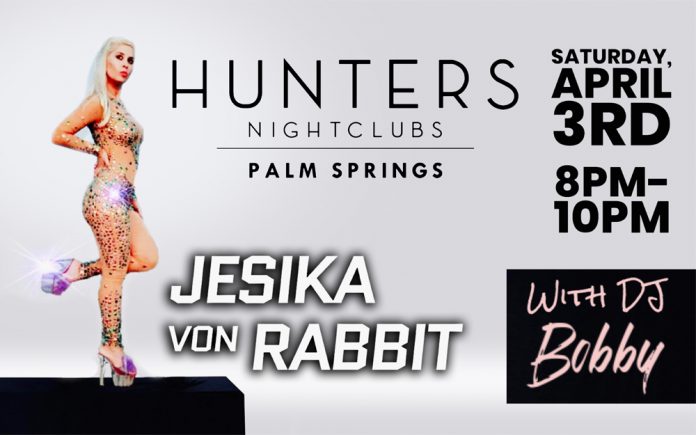 “…never look the Bombay Beach Bunny in the eye, for his eyes are made of acid-soaked jelly beans that will teleport you to a world of no return” – JvR

Jesika von Rabbit and Jessica Janos are at it again! Having collaborated on several projects including a cover of Elvis’s Blue Christmas as well as JvR’s duet with Jason Nutter, Joshua Tree, which Janos won a ‘Best Music Video’ award at the 2019 Yucca Valley Film Festival, the duo share an unparalleled artistic bond that is evident in their new project, the JvR single Bombay Beach Bunny.

Janos (Prettyface, Suburban Swingers Club, Seduced) and JvR chose the ‘real’ Bombay Beach as the backdrop for this trippy, screen-splitting music video with the variant of colors that make JvR fashionable and Bombay Beach, the once bustling tourist attraction that lured the likes of Frank Sinatra, The Beach Boys and Bing Crosby, indistinct in its dilapidation.

Through the Janos lens, you will find the beauty in Bombay Beach, a city along the Salton Sea and 68 miles below sea level! The Bombay Beach Ruins is the perfect scene for JvR and cast to partake in salacious fun and give you pause to wonder what the fuck is going on? The multiple camera angles and JvR’s request to “PLAY WITH ME” strewn on the abandoned television screen in the opening shot bring it full circle to the end scene of a young toddler watching the boob tube. It begs another question, who’s watching who? I love the conceivable societal questions JvR and Janos may be asking, all the while making satirical statements through diverting inventiveness.

The song itself, Bombay Beach Bunny. is a Dance-Pop hit. From the sound of scratched vinyl to the pulsating bass, the song is vintage and funky JvR.

To celebrate the new single and video release, a live Jesika von Rabbit outdoor show will be taking place Saturday, April 3, 2021, from 8-10 p.m. the day before Easter at Hunters Nightclubs Palm Springs located at 302 East Arenas Road Palm Springs, CA 92262. The show is free to attend and masks are required.

In case you didn’t know, JvR is a prolific and versatile performer who was the front-woman of Joshua Tree’s long-time Hi-Desert trailblazers Gram Rabbit. Her music infuses a unique mix of Electro, New Wave, Psychedelic, and Rock. Her live shows deliver sonic thunder with a dose of Wonka-esque eye candy. JvR has shared a diverse list of bills with artists such as Wanda Jackson, Eagles of Death Metal, Strawberry Alarm Clock, The Melvins, John Doe, and many others, and even has a nachos dish named after her at the legendary live music venue Pappy & Harriet’s Pioneertown Palace.