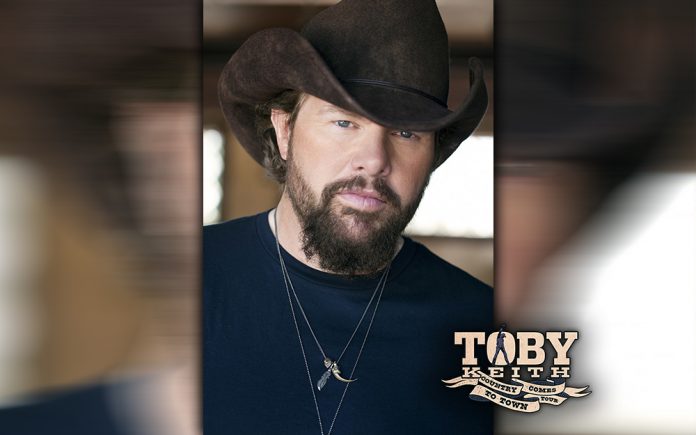 Superstar Toby Keith will be the first-ever music act to perform at Coachella Crossroads in Coachella, CA, on Saturday, May 15. It is the latest stop in his nation-wide “Country Comes to Town” tour. Popular country music singer and songwriter Jimmie Allen will open the show at 7:30 PM. Doors will open at 6 PM. Tickets for this show are only available online and will go on sale to the public on Wednesday, March 31 at 10 AM.

Keith is one of the modern era’s most complete self-directed hit makers. A singer, songwriter, and musician, Keith has released 19 studio albums, two Christmas albums, and five compilation albums with total worldwide sales of more than 40 million albums. He has charted 61 singles on the Billboard Hot Country Songs charts, including 20 number one hits and 21 additional top 10 hits.

“The Coachella Valley area has deep country music roots and we’re thrilled to have Toby Keith as the first entertainment act at the new the Coachella Crossroads,” said Chairman Darrell Mike of The Twenty-Nine Palms Band of Mission Indians. “We know fans will love this concert and our open-air concert venue. We are excited to report that Coachella Crossroads is lining up additional superstar events through the end of 2021, and we will announce these later.”

In October 2019, Keith released Toby Keith Greatest Hits: The Show Dog Years, a collection of his songs that features more than a dozen tracks with four newly recorded songs including “That’s Country Bro” and “Don’t Let The Old Man In,” which was inspired by a conversation he had with Clint Eastwood and was later featured in Eastwood’s movie, “The Mule.” The album also includes country’s most impactful viral event, “Red Solo Cup,” the video for which has received more than 53 million views and was named ACM Video of the Year.

Although the overall capacity of the event space is much higher, only 10,000 tickets are being sold and approximately 2,000 of the tickets are reserved for close proximity seating. “The Health and Safety of guests has always been and will continue to be a top priority for events at Coachella Crossroads,” continued Chairman Darrell Mike. “We are in close contact with local and state officials, working together to create the safest possible environment for our attendees. As the event date approaches, we will provide our community with pertinent information on concert preparedness, including what may be required beyond a ticket to enter festival grounds.”

For show information and to purchase tickets, visit www.CoachellaCrossroads.com

Coachella Crossroads is a 50 Acre Outdoor Entertainment Complex located adjacent to Spotlight 29 Casino in Coachella, CA. It was developed by The Twenty-Nine Palms Band of Mission Indians and hosts a variety of sporting events, festivals, outdoor concerts, and other cultural events. For more information, visit www.CoachellaCrossroads.com