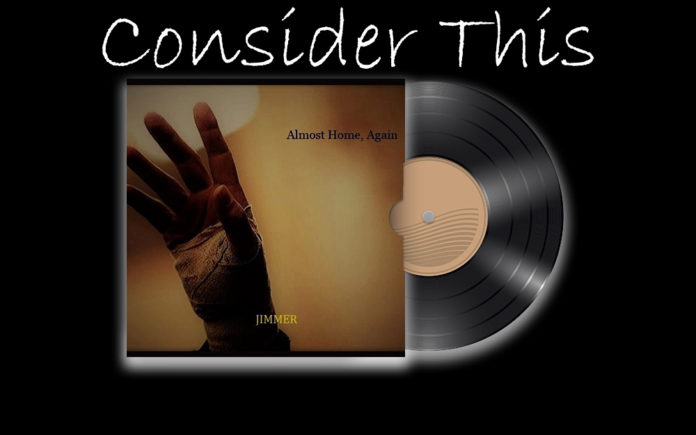 Jimmer is on a roll. After walking away from the music business over 20 years ago, the former Rave-Ups front man has made up for lost time in the last five years by releasing two solo albums and an EP with Sui generis songstress Syd Straw.

For Jimmer Podrasky, music became a lifeline early on, growing up in Natrona Heights, a small steel town close to Pittsburgh, Pennsylvania. It was there he formed the Rave-Ups while attending college. They went through a few changes before the line-up coalesced following a move to Los Angeles.

The four-piece quickly found their sound, a potent blend of Country, Blues and Folk that harnessed the combustible energy of Punk, and anticipated alt.country by several years. They honed that style playing L.A.’s fertile club scene.

Locally, their rise was swift, their first long-player, Town+Country was released through the tiny Fun Stuff label in 1985. The infectious single, “Positively Lost Me,” received airplay on the city’s premiere New Wave station, KROQ. A year later The Rave-Ups were featured in a pivotal scene in John Hughes’ class-conscious dayglo drama, “Pretty In Pink.” The film’s star, Molly Ringwald, was an ardent fan, in fact, her sister Beth and Jimmer had become a couple.

Weirdly, the two songs they perform in the movie, didn’t appear on the wildly popular soundtrack, released through A&M Records. Even weirder, was the fact that some of The Rave-Ups still held down day jobs in A&M’s mailroom. Every local write-up of the band pointed out that irony. But the band persevered, and following a protracted contract dispute with Fun Stuff, they inked a deal with Epic Records.

The label, a subsidiary of Columbia Records, was home to hit makers like Michael Jackson, Culture Club and Wham. Despite releasing two excellent efforts, Book Of Your Regrets in 1987 and Chance (named after Jimmer and Beth’s infant son) in 1990, Epic didn’t understand how to market the Rave-Ups’ rootsy sound.  Appearing as themselves on a “Beverly Hills 90210” episode, their song “Smile” played as Brenda lost (gave) her virginity to Dylan. A Generation X milestone moment, but it couldn’t raise The Rave-Ups’ profile.

Following the break up, Jimmer formed the Lovin’ Miserys with ex-Agent Orange bassist Sam Bowles and ex-Concrete Blonde drummer Harry Rushakoff. They recorded an album that, sadly, remains unreleased. By this time Jimmer and Beth Ringwald had split and he had become a single parent to Chance. To meet those demands, he took a job in the movie industry, setting aside his music career indefinitely.

He wasn’t making a living at it, but he never stopped making music. Occasionally The Rave-Ups would reunite for a local show, but Jimmer mostly kept a low profile. His return was buoyed by two unlikely champions, Robbie Rist and Ed Sikov. Robbie is best known as the child actor who played “Cousin Oliver” on “The Brady Bunch,” but he’s also an accomplished musician in his own right. Ed is an old Natrona Heights pal who is an acclaimed author and Film Historian. Between them, they got Jimmer back into the studio.

His solo debut, The Would-Be Plans arrived in 2014. Longtime fans rejoiced and critical acclaim was unanimous. The momentum continued two years later when Omnivore Recordings reissued an expanded edition of The Rave-Ups’ Town + Country. Jimmer quickly returned to the studio to complete his adroit sophomore effort, God Like The Sun.

A highlight of the God… album was a spirited duet with Syd Straw. Although they had met decades before, this was their first real collaboration. The musical connection felt so genuine that they hit the studio and quickly knocked out a six song EP entitled Shoulder To Cry On. Released in the summer of 2018, the pair played several live dates, showing off their homespun Sonny & Cher chemistry, they even put their own Spin on “I Got You Babe.” Hopefully, it’s a partnership they will revisit.

In the meantime, Jimmer has returned with his third solo album, Almost Home, Again. The album kicks into gear with “Come On Down.” A martial cadence is quickly supplanted by a tick-tock rhythm, jangly guitar and bedrock bass. Jimmer’s sunny vocals are mirrored by even sunnier lyrics that find our hero somewhat content, proclaiming “I’m so happy to be me.” Buzzy electric guitar and hopscotch bass dance around the chorus into the churning instrumental break. Life remains a learning curve, and epiphanies are sometimes right around the corner; “And so it’s never black or white, it’s more or less a kind of gray/It’s a lesson that I have to say I learned the hardest way.” As the song winds down, things get positively Beatle-esque.

Jimmer takes some stylistic detours on several tracks. “By My Side” is powered by a bongo beat, shang-a-lang guitars and pulsating keys, giving it an early ‘70s Soul-Power/Pop shimmer. The buoyant melody and arrangement nearly camouflage cautious lyrics that equate physical chemistry with calamity; “I don’t think she’s read it in the books she owns, but Romeo and Juliet were good to go, courting a disaster while the passions grow/How can we work this thing out? While she’s still playing this part, I’m growing tired of this play.” It’s an elegantly incandescent song that wouldn’t sound out of place sandwiched between songs from the Raspberries and The Jackson 5.

Bubbling percussion and hazy sitar notes swirl around the modal melody of “For You.” Jimmer’s languid delivery seems to underscore the lyrics’ ambiguity; “For you I would gladly lay down, down’s not such an evil thing, I’m happy as I’ve ever been/You’re keeping me, keeping me down, down on the ground.” The drone-y and hypnotic vibe is leavened by spiraling guitars that dart and pivot toward the close of the song.

The aforementioned “Final Facts” is positively Shagadelic. Rippling acoustic riffs bump up against Jazzy keys, chunky electric guitar, tensile bass and kinetic rhythms. The lyrics are split between sharp observations like “The gift is in the trying,” and tabloid-style apocrypha like “Jimmy Hoffa Lives, Jesus never did, James Dean was a girl, O.J. never Killed/Stonehenge just a rock, Jackie O. killed Jack, Elvis is Alive, the world is really flat.”

Meanwhile, “Everybody’s Waitin” is shapeshifts from calibrated and corrosive Punk Rock chaos to a hook-filled Country flavored hoedown. The intro is all fuzzy, sandblasted guitars that give way to banjo-riffic licks over a propulsive kick-drum beat. Lyrics reflect youthful arrogance and the art of procrastination; “Always learn a lesson when it’s already too late, always think ‘tomorrow’ when it’s time to seize the day/Always turn a back to all the things you have to face saying…I’m Alright, don’t wait for me, everybody’s waiting to be king.”

Jimmer includes a couple of alternate versions of tracks that originally appeared on “The Would-Be Plans. First up is the title track. Pivoting from a warm and introspective mid-tempo rocker, this rendition is best described as  Psychedelic Blues. A phased and bloopy rhythm connects with ascending guitar riffs, roiling bass and a flute-y effect that would make Ron Burgundy and Ian Anderson weep with envy. Cryptic lyrics navigate the emotional landmines that accompany life with an abusive parent; “How can it be, I’m so young yet so much older than I should be? Talk about your would-be plans, what would I say if I was asked to name the wonders of the sad though, wonder why my dad’s so mad/How could I guess that at 12 years old I’d think about the meaning? Talk about your being sad… where should I pray if the church is just a fashion show on Sunday, talk about your one-day fad.” Rumbly rhythm guitar rides roughshod over a scorching lead Guitar solo, slightly echoing the lyrical dysphoria.

On “Just What You Don’t,” ambient sounds criss-cross quavery electric guitar, chiming acoustic guitar and Jimmer’s choir boy croon. His narrative gifts are on full display here as he sets the strained scene between exes enduring an anxious road trip; “Summer quits while supper sits on a seat between you and me, riding just to keep us company, and the radio is broken so I listen to the breeze as it cuts right through you on it’s way to me/It cuts right through you on it’s way to blow again some other day, I wish that it would take us both away.” As a clunky, almost mechanical beat adds momentum, searing pedal steel and shuddery keys capture the feeling of helplessly hoping, (with apologies to Crosby, Stills & Nash).

Politics has never been Jimmer’s bailiwick, but the album’s final two tracks display a social conscience that feels thoroughly apropos during these surly and combative times. “Blackredyellow&brown” layers gangly guitar, a stop-start beat and honking horns below Jimmer’s yelping declaration of racial tolerance. Tucked inside this somewhat goofy arrangement is a trenchant treatise on race relations that is a sideways evocation of the golden rule; “The red man never did nothing to me, not like some have done/No the brown man never did Nothing to me like this white girl done.”

Finally, “This Land” flips the script of Woody Guthrie’s assertion that “this land was made for you and me.” Barely two decades into the 21st century and America has lost its way. Ominous guitar chords uncoil over muted keys, guttural bass and a contentious beat. Stuttery harmonica notes shade the arrangement like a distress Signal. The first verse lands with a slap; “This land is as hopeful as a Christmas suicide.” Alternately Doors-y and Dylanesque,  the bare-bones melody becomes more menacing as it gathers steam, echoing the apocalyptic ache of “The End” and the scabrous sneer of “Ballad Of A Thin Man.” The last verse paints a grotesque portrait of MAGA country; “Oh, beautiful for spacious skies, for angry waves of pain, for purple-black, mad as can be, above the bloody plain.” The song collapses in a heap of wailing harmonica, scavenging Guitars and scattershot drums.

Jimmer was ably assisted on this album by Rave-Up compadre Terry Wilson who produced and played guitar, bass sitar, violin and keys. Tom Whitlock played drums on every track except “This Land” which featured Harry Rushakoff behind the kit. MVP status goes to Chance Podrasky, a talented musician in his own right, as well as a sweet son. He not only added backing vocals to the opening cut, he also set up a crowd-funding page that helped finance the album.

Jimmer has noted that the album is titled Almost Home, Again for a reason. After nearly a quarter of a century away from making music professionally, the last few years have felt like an (emotional) odyssey of Homeric proportions. He’s finally back home, making music with is son at his side and a new Rave-Ups album in the pipeline. It feels like Jimmer is exactly where he should be.