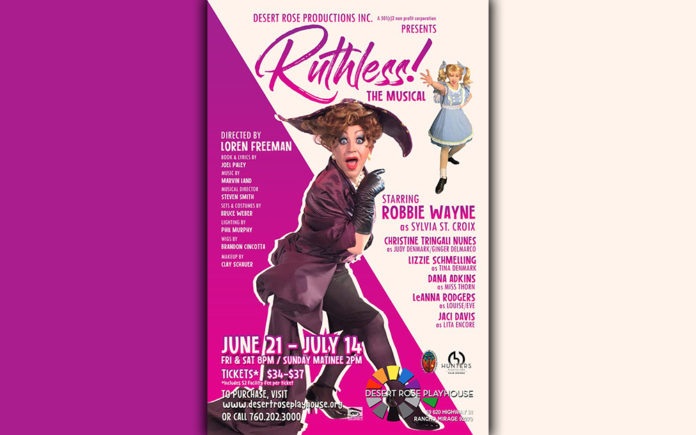 There’s an old saying in theatre, dying is easy, comedy is hard.  I can’t confirm the validity of that statement, but I can attest to the idea that making an entire audience laugh at the same time about the same thing requires a lot of talent.  And nothing proved that better than opening night of the Desert Rose Playhouse’s new show “Ruthless! The Musical.” It was nonstop fun.

With Book and lyrics by Joel Paley and music by Marvin Laird, Ruthless, is a show that immediately puts the audience in a good mood.  Written with an all-female cast, it has become tradition for the lead role to be performed by a man dressed as a woman. The show is a spoof on Broadway musicals such as Gypsy and Mame, as well as the classic cult film, the Bad Seed. Take a very funny script and an all-star talented cast and you have the makings for a great night of pure enjoyment.

I will admit that I am hard to please when it comes to campy comedy.  It’s just not my shtick.  And the first 10 minutes of Ruthless had me doubting that this was the show to change my opinion on that account.  But without warning I found myself caught up in the humor and absurdity of the story and boisterous laughter ensued.

Ruthless is the story of a naive 1950s housewife, Judy, and her adorable but sociopath 8-year-old daughter Tina. Encouraged by her manager, Sylvia St. Croix, Tina will do ANYTHING to get the lead role in her school play, Pippi in Tahiti. The musical takes the audience for some unexpectedly dark turns, all of which prove Tina is a force to be reckoned with when it comes to her ambition.

Judy discovers from her adoptive mother, Lita Encore, a theatre critic who hates musicals, that her birth mother was a famous actress. Suddenly Judy’s long suppressed diva emerges and she also must pursue her ruthless ambition.  The theme of the story is kill or be killed and make it to the top at any cost.

Normally in a show it is natural for one or two performances to leap out as being more engaging than others.  But this is one of the rare occasions that I can honestly say I loved every single performance with equal measure.  Christine Tringali Nunes, (Judy Denmark/Ginger Delmarco), Elizabeth Schmelling, (Tina Denmark,) Robbie Wayne, (Sylvia St. Croix,) Dana Adkins (Miss Thorn), Jaci Davis (Lita Encore,) and Leanna Rodgers, (Louise/Eve,) should win the award for the best ensemble cast I have seen.  Each character performance was unique, engaging and hilarious as hell.  While the script is pretty funny, I wholeheartedly believe that it is the combined talent and synergy of this cast and their wonderful chemistry that makes this show such a fun experience.

Loren Freeman made his directorial debut with this production. Freeman played the original role of Sylvia St. Croix in the hit 1993 Los Angeles production. Freeman brought his experience as an actor and his love of Ruthless; the musical, together and achieved a very successful presentation.   Steven Smith, normally a mainstay talent at the Palm Canyon Theatre, was on hand to lend his gifts as the Musical Director.  I have to give a special shout out to Bruce Weber’s costume designs.  Sylvia St. Croix’s dresses were characters all on their own.