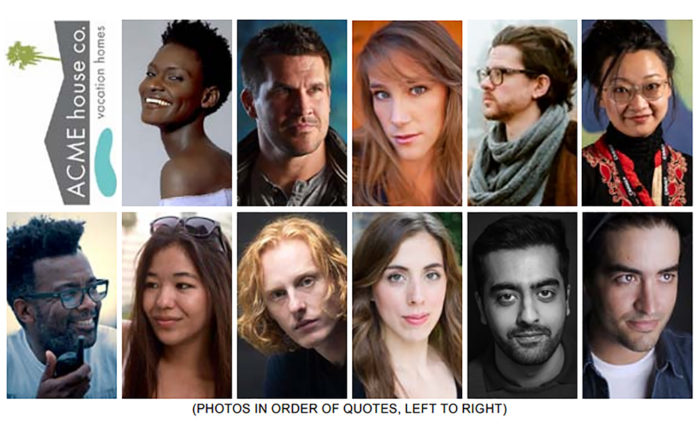 These are excerpts taken directly from the ACME House Artist Application.

“Growing up as that kid glued to The Sound of Music, back in Nigeria, to the adult now dazzled by the complexity of the characters in 12 Angry Men, films have always helped me make sense of the world.  So, I create work that interrogates the human condition, but with empathy because I truly believe we all live the same lives, we’re just colored differently.”

“Be it in acting, writing, or producing, I have found myself needing to open my own doors – and I am okay with that.  Not satisfied with waiting for a phone call, I began to write my own projects and in turn produce them.  And there we have my short film Blink!”

“I am always hungry for opportunities to be inspired by my creative peers and to dedicate brain space to artistic growth. Selection in the residency program would afford me the ability (and permission) to dedicate time and mental space to a week of inspiring conversation. This would certainly inspire future projects and lasting relationships.”

“During film school I realized that you don’t just become a director, you have to earn it, work hard for it, and prove that you can do it over and over again. I found my second calling in post production. I fell in love with editing and coloring. For me this was a way into the world of film and ever since I’ve been lucky to have worked alongside many great filmmakers.”

Jian Luo – Director & Writer, “What Do You Know About The Water And The Moon”

People said that we should never feel isolated, that as storytellers we should focus on the universal emotions, humanity, vulnerability, that “the world is flat.” I don’t agree with that, the world is not flat… I want to see things I could never have imagined back in the Gobi desert.”

“Giving a voice to the aggrieved and less fortunate has become a tenet of my work, through my choice of topics related to social justice, human rights and immigration. My approach is immersive and focused on the individuals in our society who struggle, but not under a lens of judgment or victimization. My goal is only to show how these people live, through their eyes and words.”

“As a storyteller, I hope to create works that inspire feeling. I spent my time in college studying art history and centuries of mankind’s legacy in art. In doing so, I discovered a creative yearning in myself that has motivated my pursuit as a filmmaker.”

“Dad was an actor. So was Mum; they met on a film shoot. My earliest memories were seeing family movies. Even my parents’ friends were seen on our TV along with family movies. At an early age, I developed the idea that everyone was on TV. Inevitably, I started making movies, which culminated in an Honors Degree in Film and TV and several productions of my own.”

“The subjects that interest me are vast but they always turn around raising empathy toward a harsh situation as you may have understood when watching “Just Me and You.”  I like to portray a nuanced story, where good and bad is misleading and up to the viewer to make up his mind.”

“I was born into a conservative, military household in Pakistan, a country where filmmaking is not even considered a real profession. When I broke the news to my parents about my desired career, my parents almost had a minor heart attack. To their credit, they eventually supported me, spending a lifetime of their savings on my Columbia University filmmaking degree. For me, attending Palm Springs is not just about the reverence and showcase of my work, but also about honoring the sacrifices of my parents thus far.”

“At 7 years old, I wanted to be an astronaut, but my family was always making sure that I knew how poor we were and how impossible that was. Then I started watching a series of American movies: the Charlie Chaplin films, E.T, Apollo 13, The Goonies, and many others, that blew my 8 years old mind. I thought that If I couldn’t go to the moon, I could one day make a movie about it.”