“Somedays I confess I’m happy living with unhappiness, somedays I’m right as can be, some kind of faith has got a hold on me/Somedays I embrace the world just like we were the best of friends, and somedays I can’t resist doing shit to make my girlfriend pissed.”

That’s Jimmer Podrasky on his song “Rollercoaster USA.” Those concise couplets perfectly encapsulate the dichotomy that is Jimmer. He is equal parts endearing and exasperating, a romantic with a rebel heart, but most of all, he’s a Rock N Roll survivor.

Jimmer grew up in Natrona Heights, a small steel town just north of Pittsburgh, Pennsylvania. Early on, music became a lifeline. He was inspired by Punk Rock and John Prine in equal measure. In 1979, while attending college at Carnegie-Mellon, he formed the first incarnation of his band, the Rave-Ups.  The four-piece gained a loyal following playing local Punk Clubs, like the Electric Banana.

Soon, the band relocated to L.A. and quickly imploded. The other members returned home, but Jimmer stuck it out, recruiting new band-mates in 1982. Two years later the line-up had solidified with Jimmer handling lead vocals and guitar, Tim Jimenez on drums, Tommy Blatnik on bass and Terry Wilson on lead guitar.

By day, some of the guys worked in the mailroom of A&M records. By night, the four-piece honed their sound in myriad L.A. clubs. They  created an irresistible  amalgam of Country, Blues, Folk, Pop and Punk. Teen actress Molly Ringwald was an ardent fan of the band. In fact, Jimmer had begun dating her older sister, Beth. When writer-director John Hughes, (a.k.a. the Teen-whisperer), wrote the movie “Pretty In Pink” for Molly, she used her considerable clout to get the Rave-Up’s in the movie.

The quartet was featured performing two indelible tracks in the film, “Positively Lost Me” and “Rave-Up/Shut Up.” “Pretty In Pink” was a huge hit, when it came out in the Spring of 1986. Ironically, A&M released a soundtrack which was packed with “oh-so-‘80s” synth hits from New Order and OMD. Weirdly, there was no room in the grooves for the Rave-Up’s rangy Roots-Rock. (A style that presaged the Americana and alt.country by nearly a decade). The irony wasn’t lost on local music critics, who devoted a lot of ink railing at A&M’s short-sightedness.

Despite the missed opportunity, the Rave-Up’s raised profile translated into bigger gigs and more fans. Their long-awaited long-playing debut, Town+Country, had been released in 1985 through the indie label, Fun Stuff. Exposure from the movie meant it went into heavy rotation on L.A.’s big alternative station, KROQ, and MTV began playing their videos. Major labels came calling and following a protracted dispute with Fun Stuff, the band signed with Epic, a division of Columbia Records.

1987 saw the release of their assured, first effort for Epic, Book Of Your Regrets. But the heat surrounding the band had cooled considerably. The label, (home to million-sellers like Michael Jackson and the more simpatico Stevie Ray Vaughan), somehow couldn’t figure out how to market them. The L.A. music scene was now in the thrall of Sunset Strip Hair Metal bands, Roots music had gone underground.

In 1990, The Rave-Ups made one more record, Chance, named after Jimmer and Beth Ringwald’s infant son, (his face graces the cover). Where Book… was muscular and hook-driven, Chance was expansive and slightly psychedelic. The band actually appeared as themselves on “Beverly Hills, 90210.” Not long after, they called it quits.

After the break-up, Jimmer connected with ex-Concrete Blonde drummer Harry Rushakoff and ex-Agent Orange bassist Sam Bowles and formed the Lovin’ Miserys. They recorded one album that remains unreleased. Pretty soon Jimmer was concentrating on being a full-time single dad to Chance. Music took a backseat and he took a behind-the-scenes job in the movie industry.

Although Jimmer walked away from the music business, he never stopped playing and writing music. Through good times and bad, music has always sustained him. Occasionally, the Rave-Up’s would reunite for live shows around town, but it was a chance meeting with an admirer and a reunion with an old Natrona Heights pal that got Jimmer back in the recording studio.

After a suffering some financial setbacks, Jimmer was shopping for groceries when he met longtime admirer, Robbie Rist. Best known as the child actor who played cousin Oliver on the “Brady Bunch,” (during their horrible fifth and final season), Robbie still acted, but he was also a working musician, playing a variety of instruments in a plethora of L.A. bands. He befriended Jimmer and encouraged him to reignite his music career.

Ed Sikov had been childhood friends with Jimmer, playing sports and bonding over books, movies and poetry. The friends reconnected on facebook in 2010. A film scholar and author, (he wrote excellent biographies on Billy Wilder and Peter Sellers) Ed generously offered to help finance a solo album.

Jimmer’s solo debut The Would-Be Plans, arrived in early 2014. Receiving rapturous reviews, the album was hailed as the welcome return of a protean talent. The momentum continued in 2016 when the Omnivore label reissued Town+Country, the Rave-Up’s long out of print debut. To celebrate the release, band played a few select dates in L.A. 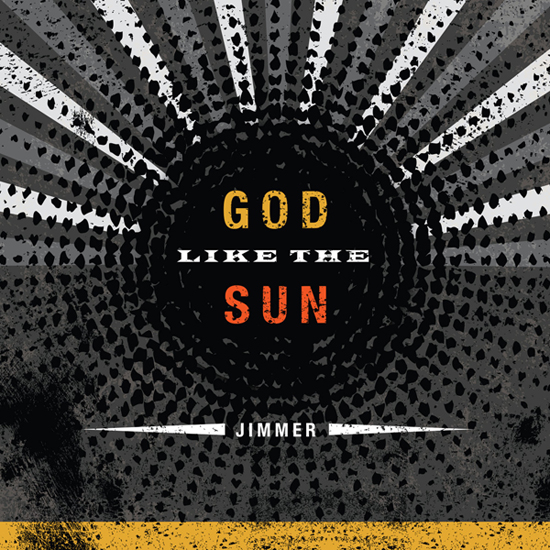 Not letting any grass grow beneath his feet, Jimmer headed back into the studio last year. Mitch Marine gathered together the same wolfpack of players, adding Lee Pardini on keys, and the result is his sophomore effort, God Like The Sun. The album crackles to life on the opening cut, “Your Heaven Or Mine.”

Jangly acoustic guitars crest over piquant electric riffs, warm organ colors and a walloping back beat. The sunshiny arrangement cushions lyrics that shift between sharp social commentary; ”If there’s a God he’s pissed, just take a look at this,” and soul-searching self-preservation; “Know that it’s best to believe…in a God, in love, anything/But I think that it’s best that you’re leaving, ‘cause baby…I got me.” A stinging ‘70s Rock-God guitar solo briefly kicks the tune into interstellar overdrive.

Jimmer’s style has always been sui generis, there’s an originality to his phrasing, lyrics melodies and arrangements. Three songs bear his trademark imprimatur, but he’s also added some new colors to his sonic palette.

On “Like Money Spent” shimmery guitar, handclap percussion and cascading piano wash over a Roots-Rock melody. Here he equates the ephemeral pleasures of Christmas Day with his brief turn as a Rock Star; “Christmas came and Christmas went, like so much fame, like money spent.” A Glam-tastic guitar solo pinballs through the echo and sway.

The aforementioned “Rollercoaster USA” blends smoky harmonica, slap-back bass, sparkling keys and a stuttery back-beat. Jimmer’s countenance is honest and introspective, as he questions his instinct for self-sabotage; “And rollercoast me now, sure was somewhere to be/But I want to know was I fooling me?”

Meanwhile “Shoot The Moon” offers a prickly recollection of his broken romance with Chance’s mom. The melody is a slow-cooked synthesis of Country-Soul anchored by sleepwalk guitar, crisp organ, a swoony doo-wop rhythm and sighing back-up vocals. Their courtship was bumpy; “Well, we fell in love like trucks collide, pretty noisy, pretty hard/It was just like us to find some kind of trouble in our own backyard.” And cohabitation was worse; “Pretty soon we were mom and dad, things went good and things went bad/It was ‘tomayto-tomahto’ to me, everything gets blurry eventually.” Still, Jimmer came out the other side with his sense of whimsy intact.

Both “Grandma’s Song” and “The Ballad Of Addie Polk” offer melancholy character studies. The former is propelled by a fluttery martial cadence, churchy organ runs and blistering bottleneck guitar riffs. Jimmer effortlessly slips into the skin of a bereft widow, longing to rejoin her soul-mate. Call-and-response backing vocals give the song a spiritual verisimilitude.

The latter opens with skittery, scorching guitar riffs, (think the Osmonds’ “Crazy Horses,” seriously, go ahead and think it). But the arrangement quickly downshifts as strummy acoustic guitars fold into a kick-drum rhythm. Initially, Addie Polk feels like a 21st century Eleanor Rigby, a lonely recluse dulling the pain with prescription medication. Ultimately, nothing salves her psychic wounds.

The album’s best tracks display Jimmer’s effortless sense of Pop-craft. The Psychedelic stomp of “(I’m In Love With) A Girl We All Know” is powered by slithery marxophone runs, (in case you didn’t know, that’s a fretless zither), spooky organ notes and guitars that fuzz and growl. Jimmer’s mien pivots from effervescent to equivocal as he checks off this mystery girl’s attributes and idiosyncrasies; “She’s the wi-fi, she’s the tv, she’s the front door/Now I know who the sun up in the sky’s for…she puts the get in forget-me-not, she makes night of the day/She catches moments that can’t be caught, what else can I say?”

The Bubblegum crunch of “Half A Day” echoes the sunny charm of the Archies. Although the lyrics limn the lonely logistics of shared custody, the percolating melody nearly camouflages the sadness and heartbreak “I don’t love you Wednesday through Sunday, all I need is half a chance/Let bygones be bygones because I’m being half-a-dad.”

The instrumentation is buoyed by crushed velvet organ, a pummeling back-beat, bang-shang-a-lang guitar and peppery backing vocals. Of course, Jimmer being Jimmer, he begins this tale of woe with this well-turned phrase, “Sunday comes as fast as a teenage boy, know what I mean?” (Sadly, yes). Finally, on the duet “You Can Count On Me,” Jimmer pairs with singer-songwriter Syd Straw. Although the cognoscenti have been digging Syd’s nonpareil charms since she teamed up with the New York/No Wave collective Golden Palominos waaay back in the ‘80s, she has flown under the radar for most of her career. Along with three brilliant solo records to her name, Syd has performed the aristocracy of alt. (or modern or whatever the fuck you call it) Rock; from the db’s to Rickie Lee Jones, Dave Alvin, Los Lobos and Wilco. Before this entire column is hijacked to extol her myriad attributes, let’s return to Jimmer. “You Can Count On Me” flips the script on Sonny & Cher’s unofficial theme song, “I Got You, Babe.” Over high lonesome pedal steel, chugging guitars and a chunky back-beat, Jimmer and Syd trade sarcastic rejoinders championing each other’s resilience. It’s a sweet n’ sour back and forth until their voices warmly intertwine on the chorus.

The album closes on an ambitious note with the title track. A loping song-suite, it opens with a Country-tinged spoken intro before kicking into an urgent rocker. The lyrics offer a mordant meditation on faith, spirituality and love. Gritty guitars and pedal steel pinwheel and collide, the melody is tethered to a galloping gait. Beatific backing vocals act as an insistent Greek chorus latticed over honeyed harmonica notes, as Jimmer presents this cogent theory; “Maybe God is like the sun, well, you know it’s up there but sometimes it’s gone/And maybe love is like that sound when the big tree falls and you’re not around.” A thought provoking conclusion to an amazing record!

God Like The Sun extends the winning streak that Jimmer began with Would-Be Plans. Each album confirms his status as a singular singer-songwriter. Sure, according to the Chinese Zodiac, this is supposed to be The Year Of The Rooster. But in a perfect world, 2017 would be proclaimed The Year Of Jimmer.