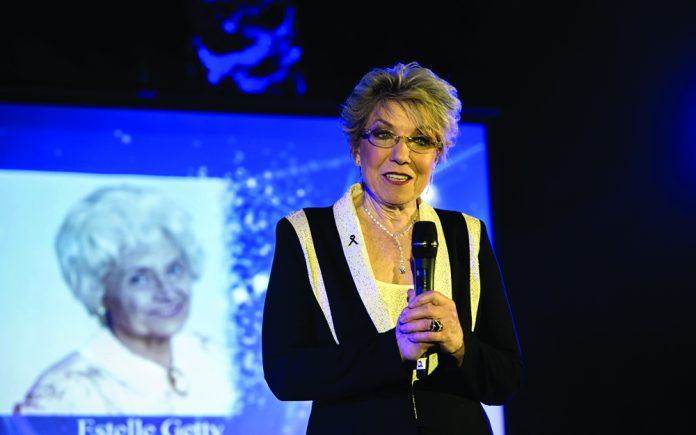 It is often from moments of hardship and discouragement that we find the strength to carry on, and Jo Rosen has done just that as the founder of the Parkinson’s Resource Organization (PRO). It was formally incorporated and given its 501(c)(3) status on December 17, 1990.

Rosen was inspired to start PRO when her mother was diagnosed with Parkinson’s in 1984. Her then-fiance and future husband, Alan, was also diagnosed in 1989. 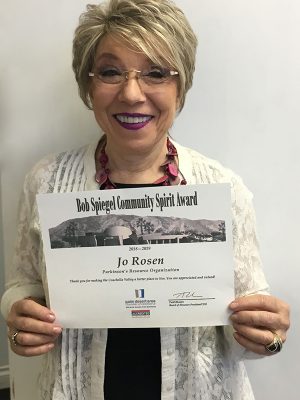 PRO has support groups throughout Southern California, in addition to publishing a monthly newsletter, and having an interactive and robust website that includes the Wellness Village, which is a virtual, vetted, video-driven Resource Directory, and a Memorial Wall to carry on the legacy of those who have passed. They also provide one-on-one coaching sessions that help guide people through their journey.

“Thirty years ago, there were no support groups for caregivers of people with Parkinson’s. Along with 13 family and friends, we brainstormed to determine what a new venture would look like and we came up with covering the niche of ‘educating and emotionally supporting people caring for and living with Parkinson’s,’” stated Rosen.

A 30th Anniversary celebration will be held April 18, at the Renaissance Esmeralda in Indian Wells with the theme of “Puttin’ On The Ritz ~ A Pearls of Wisdom Gala.” Guests are invited to don their 20s attire and wear their pearls. El Paseo Jewelers is gifting the Grand Prize of Pearls.

This year’s honorees are Nick Baggarly & Todd Borgie of “Driving Around the World,” for the Awareness Award; Dick Heckmann receiving the Warrior Award given to an individual who has been diagnosed with Parkinson’s disease and refuses to allow the diagnosis to take them down; Carl Karcher Sr. for the Star Award given to an individual who was or is an inspiration in dealing with the effects of Parkinson’s disease; and Lovey Slaughter for the Volunteer Extraordinaire Award, who is nearly 95 years young and has given 25 years of service to PRO.

Raju Mehta is receiving the Community Spirit Award, which is given to an individual or organization who tirelessly gives their treasure in the community to a multitude of good causes. Ritchie McPhail will receive the Consummate Caregiver Award given to an individual who tirelessly cared for a loved one as they were living with Parkinson’s disease. Jackie Farrar, a 35-year young person with Parkinson’s, will be given the Matthew Award presented by Matthew Lu, a 25-year-old with Parkinson’s who is creating his own legacy. This award describes characteristics of what each brave soul carries with them while they endure the disease.

“I would very much like the Parkinson’s Resource Organization to be driven out of business with the onset of a cure for a disease that, in essence, imprisons a person in their body, takes their dignity and the dignity of their loved ones, and is very expensive. But until then, PRO will continue helping those caring for and living with Parkinson’s. Our help is currently going to hundreds of thousands each year,” explained Rosen.

PRO continually expands its programs and works toward making them the most user-friendly programs, enabling those involved to help from diagnosis through death. Rosen finds the most difficult aspect of running PRO is the day-to-day operations, particularly in finding the right staff. The organization is in need for at least three more right now. With the right funding, Rosen is looking to hire an Office Manager that can do a better job of creating the programs that provide love, support, wisdom, and comfort to those in need.

“I am extraordinarily proud of what the Universe brought to the world using my efforts and talents, and PRO as the vehicle. When I started this organization 30 years ago, I made a deal with God, that if she would teach me everything I needed to know about creating the greatest quality of life for my Alan, I would share it with the world.  She continues to teach me and I continue to share even though Alan has been gone for 14 years,” said Rosen.

PRO is always in need of volunteers who have talents from filing to facilitating support groups, with low-tech to high-tech skills. Rosen invites people to come talk to the organization to let them know what participants are interested in doing. Naturally, the gift of funds is always appreciated because as much as it takes a village to run a charity, it also takes a good deal of funds.