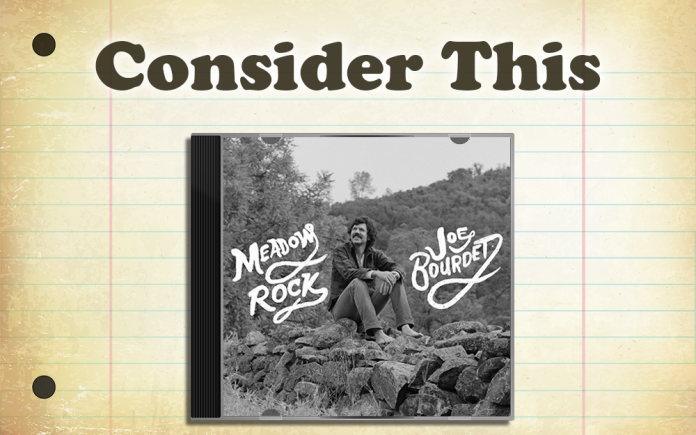 I don’t have to tell you, times are tough. Shit is serious, I mean, let’s just scroll down the list: beginning we the most egregious development, according to the Supreme court, and several state governors, women are no longer in charge of their own bodies. Then there’s a war in Ukraine, gas prices through the roof, the worst inflation rates in 40 years. Europe is currently en fuego, and, oh yeah, there’s a deadly shooting (or mass shooting), practically every day. I don’t know about you, but I need a break from all this tsuris. This week at least, I’ve been getting that peaceful, easy feeling from Meadow Rock, the solo debut from Joe Bourdet.

Joe Bourdet spent his formative years in the small, Bay Area town of Lafayette, California, in the house his grandparents originally purchased in the 1930s. A little later, they moved to Grass Valley and the neighboring metropolis of Nevada City. As a kid, musical influences were plentiful. Driving around with his dad, the cassette deck was loaded with Classic Rock from the ‘50s and ‘60s, as well as Roy Orbison Beach Boys tapes. At a young age, he and his best pal Fantasi would skip rope and sing those same ‘50s and ‘60s songs like “Rockin’ Robin.” Fantasi’s granddad, Jack Minger, was a renowned Jazz trumpeter and also a huge inspiration. Throughout the ‘80s, Joe absorbed his share of Top 40 hits, but a chance encounter with a VHS rental copy of The Beatles’ Hard Day’s Night simply blew his mind. It also ignited a passion to create his own music. Although he’d picked up a guitar in grade school, he didn’t stick with it. But by his teens, he borrowed his Uncle Mike’s guitar and redoubled his efforts to learn. Once he was in high school, he channeled his outlier energy into music. Not only did he master guitar, he also became proficient on bass and keys.

As a film major at UC Santa Cruz, he began playing in local bands. Around the same time, he came across a collection of whipped, fire-damaged (but playable) vinyl from the ‘70s that completely fascinated him. By the turn of the century, he relocated to Los Angeles, intent on pursuing a music career full-time. Connecting with like-minded musicians, he spent time as part of the band, Whispering Pines.

His next musical adventure was as part of Josh Schwartz’ post Beachwood Sparks/Tyde project, Painted Hills. The four-piece’s sound was a sharp amalgam of Psychedelic and Americana. A self-titled debut arrived in 2010. Sadly, after a valiant battle with ALS (Amyotropic Lateral Sclerosis), Josh passed away in 2017. Following Josh’s death, Joe decided to forge ahead with a solo career. The result is his debut, Meadow Rock. The album springs to life with “Songbird Revisited.” Sugary acoustic notes intertwine with swivel-hipped electric riffs, matched by Hammond B3 colors, loose-limbed bass and a percolating rhythm. Joe’s warm tenor, equal parts honey and woodsmoke, soars over the instrumentation. Reflective, slightly cryptic lyrics; “My songbird, my sweet songbird, what shall we play today, you find me in sweet peace and time and welcome me to stay/You come to my window, sing for me and oh, to touch you, but I’d rather just let you be,” seem to summon the elusive muse and pay homage to the revered Gibson guitar. On the break, sanctified slide guitar solos unfurl from each speaker, cushioned by churchy B3 runs. The song powers down as chunky electric chords intertwine with plangent acoustic notes.

It seems like most of the songs here celebrate the majesty that is mother nature. That’s no accident, although Joe has made Los Angeles his home, he remains homesick for the Sierra Nevadas and the foothills of his childhood. Take “El Capitan,” wherein rippling acoustic licks thread between agile bass lines, and a rock-ribbed beat, as sylph-like pedal steel weaves in and out of this aural tapestry. Lyrics manage to humanize every crag and crevice of this formidable Yosemite monolith; “All along the Muir trail and over the Nevada Falls, underneath the Hetch-Hetchy, when they flooded her walls, I sense a presence there in the pines and the stones, a heartbeat much deeper than, of mere flesh and bone.” Joe scales the musical peaks on the verses, but receives a little harmonic heft on the chorus, courtesy Mimi Michel. Swirly Moog notes achieve elevation gain on the break, dovetailing with finger-picked acoustic riffs and a towering pedal steel solo.

Conversely, “Seamist” heads to the coast. Sparkling guitars, fizzy Fender Rhodes, pliant piano, and a breezy beat hug the melody’s rugged playa. The sure-footed arrangement echoes early ‘70s era Beach Boys, while the lyrics bypass the adrenalin-rush of surfing, for the more ephemeral pleasures of what John Lennon characterized “watching the wheels.” Mostly, it’s an homage to the hypnotic powers of the ocean; “Goodbye Laguna, I should’ve left the party sooner, and Leo Carillo, adios, mi amigo, I stare out at the vastness of the sea, a wave of memory comes crashing over me.” Glassy slide guitar riffs oscillate on the break, quietly framing this sleek siren song.

The action slows for a couple of introspective cuts. Read between the lines of “Call You Friend” and it’s part environmental rallying cry, meant to protect this fragile planet, and part restless farewell to a longtime compadre. Sidewinder acoustic guitars slither around fuzzy electric riffs, tensile bass, pillowy Hammond B3 and a loping beat. Almost from the jump, Joe warns the “Tired Earth is about ready to give up.” Rather quickly, the ecological becomes interpersonal; “Are you feeling no pain, feel no wind, feel no rain, but ain’t it a shame, for we who remain, to go on without you ‘til the end, I called you friend.” Slinky guitars spark and pinwheel on the break before linking up and unspooling a couple of interstellar solos that feel effortless.

Meanwhile, “Unwritten Story” simply seizes the day. The melody shares some musical DNA with the Cat Stevens deep cut, “Trouble,” anchored by molasses-thick Hammond B3, burnished piano, wily guitars, buoyant bass lines and a kick-drum beat. Lyrics offer up a carpe diem philosophy; “I just want to live in the moment, time is not worrying me, make every moment a home and let everything be, let everything be, let everything else be.” Joe stacks his harmonies on the bridge, as he imparts a last bit of hard-won wisdom; “It’s like a book you’re reading, with nothing left in the fold, an unwritten story, that as you’re living gets told, the moment is waiting, so take all the time you need.”

The best cuts here fold a bit of grit and gravitas in into the sunshiny textures. “Amongst The Pines” is equal parts bucolic and beatific. The instrumentation blends braided acoustic licks, stinging electric riffs and cascading mandolin atop slippery bass and a thunking beat. Joe reminds us that the stunning vistas that surround us shouldn’t be taken for granted; “Come wander out amongst the pines, farther out, dappled and gray, now higher we climb and for this brief time, yours and mine we all survey/So let the world spin in moonlight, mountain sounds for us to play, and I will give you a taste of the good life, call it foggy mountain way.”

Meanwhile, the gossamer harmonies that lattice “Lost Along The Way” (courtesy Alana Amram), lean closer to The Bee Gees than the Eagles. Liquid acoustic arpeggios intersect with lithe bass lines, lush Wurlitzer, plaintive piano and a galumphing beat. The meandering melody wraps tight around metaphorical lyrics that delineate a crisis of confidence; “I’ve done this drive a hundred times, don’t recognize the highway signs, I’m stranded, old mission empty for morning prayer, no one can hear me crying out here, abandoned.”

Finally, Joe pays homage to the late, great Josh Schwartz by covering a Painted Hills favorite, “Morning Light.” Joe’s version is slightly less Psychedelicized than the original, more stripped-down. Flickering guitar fillips coil and converge, sidling around authoritative double bass, patchouli-flavored Hammond B3, and a propulsive rhythm. Fittingly, lyrics address an absent friend; “Sometimes I read a picture like a book, then I close my eyes and take a second look, the images take on a strange new life, colors flying in the moonlit night, one time I swear, I saw your face, staring down from outer space.”

Finally, on the painterly “Mantra.” Joe’s Prog-Rockified vocals sail skyward over chiming guitars, whirring keys, roiling bass and a rock steady beat. Lyrics share a path to personal enlightenment; “I’m balanced here, as if on a clothesline, and although I fall, I easily find I return to mantra that’s tuned to my mind, and with meditation I’m leaving behind sense-gratification for self-realization, sense-gratification for self-realization.” On the break, kaleidoscopic keys bookend double-decker slide guitars and skronky electric riff-age. This muscular magnum opus closes out the record with a satisfying cosmic kick.

Although Joe plays nearly everything on the album (acoustic, electric, high-strung and slide guitars, Hammond B3, piano, bass, Fender 6 and Moog), he also relied on a wolfpack of talented pickers and players. The roster includes Justin Smith, Will Scott and George Sluppick on drums, Brian Filosa and Rob Douglas on bass. Vic Martin on keys, Tim Walker on pedal steel, Dave Blaine on mandolin and Jason Soda on guitar. Backing vocals were provided by Mimi Michel and Alana Amram, the latter not only co-wrote “Lost Along The Way,” but also added Wurlitzer, bass and electric piano to the song.

Joe’s debut returns you to the halcyon days of shag carpets, shag haircuts, bell-bottoms, mood rings and pet rocks. The ‘70s were far from perfect, but it was a much less complicated time. There’s nothing gimmicky about Joe’s affinity for this musical era. It’s clear he soaked up a lot from that old record collection that he rescued, and he’s distilled those influences into his own heady musical brew. The playing here is impeccable, remaining lean and unfussy throughout. Meadow Rock wraps around the listener like a comfortably frayed jean jacket.