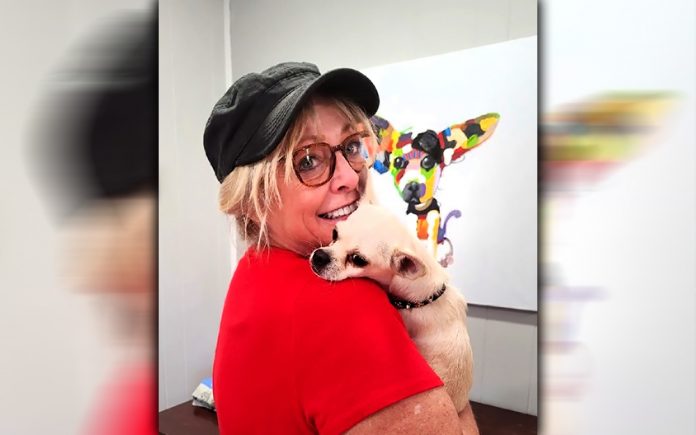 Lorie Loftis, local business woman and dog lover extraordinaire, said goodbye to her precious pup Chica in August, 2021.  Buddha, her other dog, shared his human’s grief at the passing of this little Chihuahua with a big happy personality.

She spotted Chica many years before at the old Indio Animal Shelter.  Lorie was my first “rescue partner” at Loving All Animals, and on that day we were on a shelter run to rescue dogs for this animal welfare organization. Instinctively knowing she would be another “foster failure”, Lorie immediately adopted the white Chihuahua she named Chica.

How does one replace a soul mate dog?  Lorie had no plan to adopt another dog on October 3, 2011, while shopping at the Apple Store on El Paseo.  She suddenly recalled there was a dog adoption event, “Gardens to the Rescue”, taking place nearby.  Turning the corner, her eyes didn’t focus on the tail wagging pups seeking homes, but rather she was transfixed by a poster of a dog that was NOT at the event.

Cupcake’s legs were longer and her ears were smaller than Chica’s, but her breed and coloring were the same. Her bright eyes and mesmerizing smile were identical.  The poster was displayed at the booth of Loving All Animals, the organization Lindi Biggi (Lorie’s mom) founded in 2008.  Lorie sought out Executive Director Michael Phipps-Russell about her interest in Cupcake, her eyes welling over with emotional tears.

It was a magical meeting the following day at the Loving All Animals shelter in Coachella.  Cupcake was as charming as her name, and the once homeless stray pup went to a home where she will be treasured forever.  Her name was changed to Joy, symbolic of the happiness and healing she brought.  As Joy danced through the house, her named evolved to Joy Bella Ballerina.

Her canine brother, 12-year-old Buddha, was still depressed over the loss of Chica.  At first Buddha didn’t know what to think of the young “energizer bunny” zooming happily around his home.  Buddha used to kiss Chica, who accepted but never returned his affection.  However, Joy responded to his loving gesture and the two exchange daily smooches.

Did you know that Chihuahuas are the second largest breed of dogs in public animal shelters, second only to pit bulls?  Overbred and sometimes given a bad reputation, they are often overlooked by adopters seeking “white fluffies”. 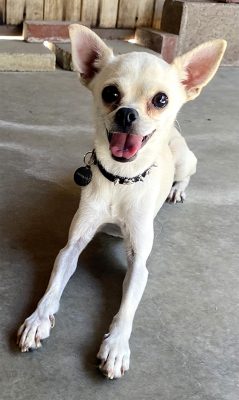 Lorie Lofts tells us, “Chihuahuas are wonderful, loyal, and snuggly.  Unfortunately they get a bad reputation when some owners encourage their barking, thinking it’s cute for their small dogs to act like lions.  I think Joy once lived with other dogs because she is so devoted to Buddha. Both Buddha and I needed some joy back in our lives.  I turned it over to God, and He brought us this sweet miracle.”

The personalities of Chihuahuas are as varied as those of the people who love them.  If you are among the 75% of dog owners who sleep with your dog, Chihuahuas promise to burrow under the covers and snuggle with you.  They promise to sit by your side and watch television on the couch.  They love to travel, enjoy car trips, and are small enough to travel in the passenger area on airplanes.

Contact Loving All Animals at www.lovingallanimals.org and (760) 834-7000 to adopt, foster, volunteer, or donate.  Pictured here are some adoptable cats and dogs, including Chihuahuas, at our region’s largest shelter, Riverside County’s Coachella Valley Animal Campus (CVAC), www.rcdas.org.

Joy tells us how much love and happiness a rescue dog brings when your give them a “second chance” home.  When you lose a dog, the best thing you can do in their memory is adopt a deserving homeless dog.  Surely Joy is a gift from Chica.