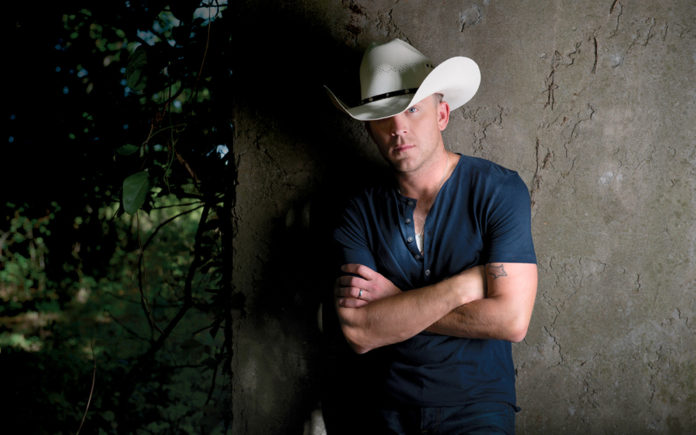 With four studio albums and six #1 singles, country music singer and songwriter Justin Moore has made a big splash since debuting on the country scene ten years ago. He’s made a name for himself in a huge way, sharing the stage with such country greats as Brad Paisley, Miranda Lambert, Hank Williams, Jr., and more. In between touring, he spends time at his home in Arkansas with his wife, Kate, three daughters, and baby son. He made time to talk to us ahead of his Saturday, May 26 show at Spotlight 29 Casino.

CVW: Now that you’ve been performing nationally for over a decade, what do you draw inspiration from and has that changed over the years?

JM: “As far as playing music live, the inspiration comes from the fact that I love doing it. It’s why I started doing it. Nothing I’ve found can duplicate the feeling of being on stage. I draw inspiration from everyday life; being a husband, being a dad. I’ve learned a long time ago if I’m going through it someone else is too. As a songwriter, you kind of pay attention to what’s going on around you.”

CVW: Talk to me about your next album.

JM: “We’ve written the entire album, but have yet to record anything at all. I’m really excited about it! It’s going to be a product of the 80s and early 90s. I always said if I had opportunity to make the album I wanted to make without interference; it would sound like it came out in ‘92. We’re pretty traditional sounding and always have been but this is the most traditional yet. I really like a lot of the music. I’ve written over 40 songs in the last 5-6 months. We’ll go in and track some songs in next month or so.”

CVW: What do you love about touring and how do you juggle life on the road and family?

JM: “I love touring because I get to see different parts of country, as well as outside of the country. The best part of touring is the two hours we spend on stage with fans. Of course it’s difficult being away from my wife and kids but we understand that’s part of it. They come on road with me as often as they can. With school it’s more difficult to navigate than when they weren’t. But in the summer they come on road. I’m not a big fan of modern technology but Facetime makes it easier. We try to always make the most of our time together.”

CVW: You write a lot of your own music. Do you have any dream collaborations – writing or singing?

JM: “Yeah, you know as far as both of those facets – I’ve been really lucky because I have been doing it this long to knock a lot of them off the bucket list. But as far as recording-wise the one I haven’t yet that’s my favorite artist is Dwight Yoakam. So I’m keeping my ears open for that perfect song. But I’ve been lucky in my career already to collaborate with legends like Charlie Daniels and Hank Jr, and my buddies Brantley (Gilbert) and Miranda (Lambert). Any time I have the opportunity to do that with either my buddies or my heroes, it just makes this all even more enjoyable.”

CVW: What can fans expect at your show?

JM: “Hopefully to have a good time and really get their money’s worth. It’s a high energy show. The fans and country radio have allowed us to have hit records and we like to get crowds helping out with singing. We’ve thrown some older material in as well, stuff fans have enjoyed and haven’t heard in a while”

Grab your cowboy boots and hat and get your tickets to see Justin Moore perform at Spotlight 29 on Saturday, May 26. You can purchase tickets here: http://www.spotlight29.com/entertainment/concerts/justin-moore/