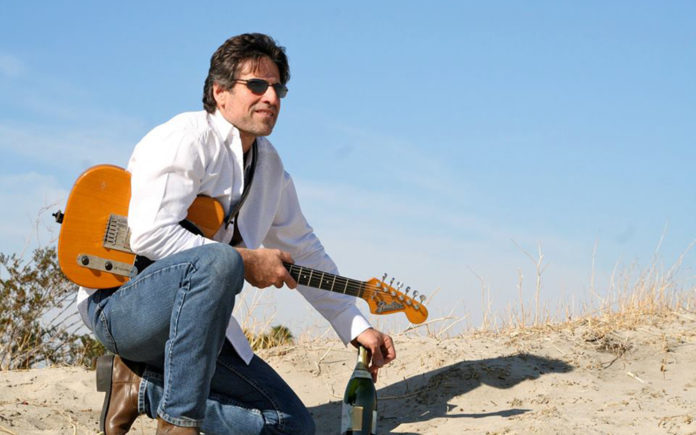 Joe Baldino is a passionate guitarist, composer, musician and performer. His songs are all original and the sound is a melting pot of acoustic, easy listening jazz saturated with a Latin feel. Joe has been working on his second CD called In the Flow for the last 3 years writing all new original music. It is being produced by legendary bassist and producer Brian Bromberg who’s had a slew of top 10 Billboard hits.

Every instrument on this CD is live and ‘organic’ as Brian calls it.

Joe enthused about the recording process “We’re recording everything on a $100,000 perfectly tuned piano.”

Whether it’s a Rhodes keyboard sound that’s wanted or something else, it’s recorded on this piano and then edited into the final masterpiece.

Joe said the reason it’s taken so long is that he’s reworked the songs a total of 3 times to get them where he and Brian want them to be. After the third time, Brian told him “This is it!”  The core band which consists of Hans Zermuehlen on keys, Joel Taylor on drums (Yanni), Brian Bromberg on upright bass and of course Joe on guitar making this a small tight ‘organic’ group that will give you hours of listening pleasure. 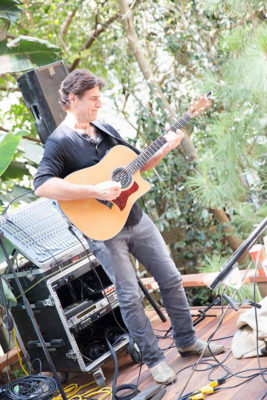 Baldino said he ‘loves the sexy sound’ of the upright bass.  His first CD was more electronic in nature so this is a complete departure from his previous sound. He said the first recording session was a love-fest which is unusual. The whole team worked together to put together a great CD. There was a revelation when they discovered that Joe plays his music ‘by feel’ or by ear. Once that became known everyone worked together to help make it great.

Next up is going into a bigger studio in LA to add real strings and real horns. A purist, Brian says that 50 years from now this will still be ‘real music’. He also said “Dude, this music is really good, it’s going to get airplay.” Those words couldn’t be sweeter to hear.

There are 10 songs on the CD that is coming out. One of them is “Bennie Blues” which was reworked many times. After Joe spent many hours on it, Brian heard it and told him. “OMG this is great! But now we’ve got to cut it in half.” He believes it’s better to make it right then to make it quickly.

I worked with Joe for the last few years and introduced him to Brian when he started talking about doing a new CD. It’s wonderful to see this CD coming to fruition. He thanked me for that opportunity and also for playing in the Celebrity Jazz Jams where he got wonderful feedback on his music from Darryl Williams (#1 Smooth Jazz hit), and Greg Manning (numerous #1 hits). He said playing with them and practicing 16 hours a day to match them helped him ‘raise the bar’ on his playing. Joe has such a great attitude, always positive no matter the situation making him a delight to work with. He told me, “beautiful things come out of humility.”

This beautiful CD will be coming out this fall.

He also wanted to thank Fitz for all his help and Will Donato for joining him on stage. Joe is nominated for the ‘Best Jazz Instrumental’ CV Music Award. He will be performing one of his new songs at the awards on Thursday, May 31 in the Jazz and blues segment from 6:00 to 6:40 at the Big Rock Pub in Indio. This half hour will also feature Keisha D, Deanna Bogart, Kal David and Lauri Bono, and The Smooth Brothers.

If you’d like to see Joe perform you can see him at Venus de Fido in Palm Desert. He also plays at Europa and Ponte Wineries in Temecula. He performs his original songs with tracks and several live guitars that he plays. It is mesmerizing and relaxing.