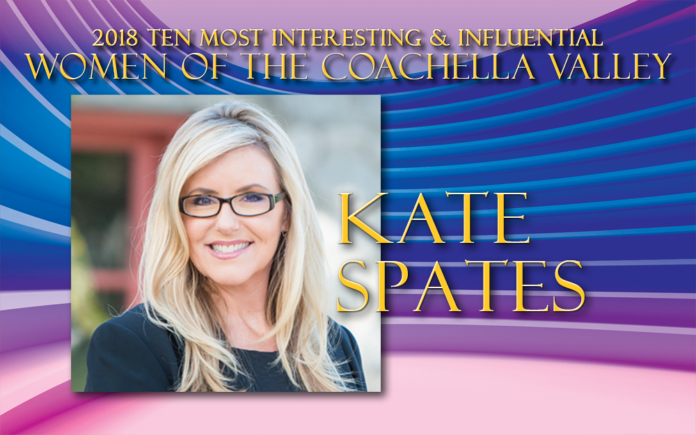 Although she was born in San Jose and spent her first twelve years in Pleasanton, Kate Spates is a Southern California girl through and through. She and her mother moved to Rancho Mirage in 1980 and have lived in the Coachella Valley ever since. A graduate of Palm Springs High School and subsequently College of the Desert and CSUSB Palm Desert Campus, Kate loves the community she is so deeply a part of. 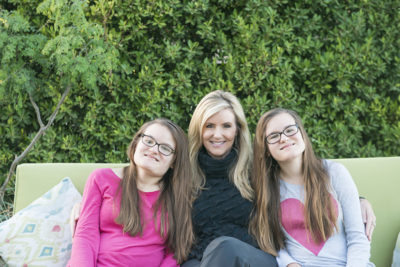 After high school, Kate typically held two to three jobs to support her mother and herself. Taking on the role of breadwinner impeded the traditional college path for Kate, but she graduated proudly in 1997. Soon after graduating, she became serious about a career in hospitality and worked for nine years at the JW Marriott Desert Springs Resort & Spa. A year before her college graduation, she left Marriott to begin a start-up website development company and was a pioneer in that field, especially as a woman. She taught herself how to design and code and used networking opportunities and playing golf to win business. The company grew to 12 employees and expanded to a full-service marketing and advertising agency. In 2011, she sold the company and stayed on for a few years. Of this stretch of her career, Spates enjoyed employing women, especially moms who she could give flexible schedules so they could prioritize their families. She found that due to these policies, that her employees were extremely loyal and flexible when she needed them to work evening or weekend events. She has had the joy of watching them go on to have their own internet businesses and be involved in the community. This, she says, makes her feel proud to have had an influence on them and inspired them to take on the challenge.

Since 2014, she has been consulting on a variety of interesting projects. Most recently she ran for Rancho Mirage City Council in a valiant effort to infuse new energy and ideas into a city long run by the same incumbents, but was not successful in her bid for a seat. Had she not left the hospitality industry, Kate says she would have enjoyed traveling and opening new hotels around the world, although ultimately, having a family and being involved in the community was more important to her. She has thought about writing and producing films and plans to eventually get involved with some projects.

Kate was was married for 23 years, and divorced in 2015. She has twin 15-year old daughters, Abby & Cassidy, whom she draws the inspiration from to do what she does every day. The twins were born prematurely and they, along with Spates herself, almost didn’t make it. They were given a grim diagnosis at birth, but have since shattered all of the limitations that were placed on them and continue to amaze their mother every day. To refresh her mind, body, and spirit, Kate likes to spend time with girlfriends, work out, practice yoga, hike, dine out, and travel. Last year, she created and began volunteering to host a radio show on KCOD called Major Discovery. She explores the majors and certificate programs available at College of the Desert in a 30 minute interview with faculty, business leaders and students.

Never one to rest on her laurels, even Kate’s hobbies are ambitious. “I guess you could say that serving on boards and doing non-profit work are my hobbies,” Spates says. Currently, she is actively volunteering her time and leadership to the following organizations:

To add to that, some awards and accolades she’s received are:

When she does find the time to relax, she likes to go anywhere there are palm trees, beaches, sunsets, huge pools and lovely clear ocean water. Her tips for keeping it together and balancing family, work and personal life hinge on perspective. Says Spates, “I try not to react when things don’t always go my way. I take a breath, talk it out, try to see the lesson and move on. I don’t spend a lot of time over-analyzing things. I trust my gut feelings and keep my cool.” Her mantra is, “Don’t be a victim. Don’t blame anyone or any circumstance for the way you are. Own your life. Be honest. Don’t look back, that’s not the direction you are going.” 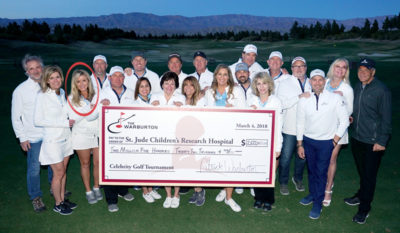 Kate lists hard-working women who have been through struggles and pain and overcome extraordinary circumstances as the women she respects most. She says those are some of the strongest women she knows. She enjoys listening to powerful women who have had success in one way or another, whether in politics, show business, technology or being a supermom. She claims it would be impossible to mention one woman who she respects most, when there are so many who have influenced her throughout her life.

Ms. Spates is representing AMP – Academy of Musical Performance, of which she is the co-founder. This fantastic organization is a contemporary music education program whose goal is to enrich the lives of young musicians living in the Coachella Valley by fostering productivity and social responsibility through creativity, communication and collaboration in the development and enhancement of musical performance and concert production skills through participation in a “rock band” style educational setting for young musicians age 10-18.