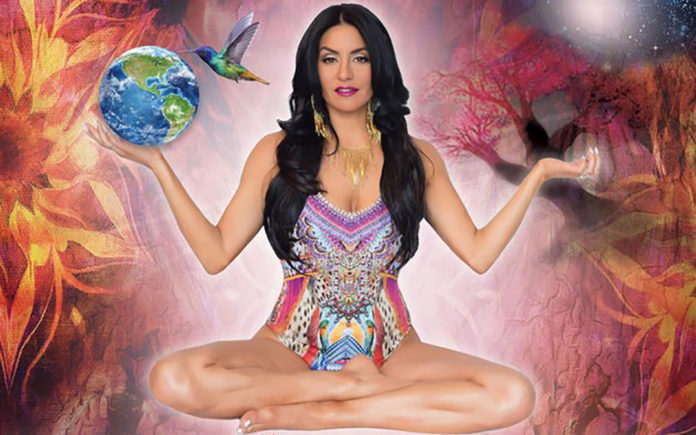 I was blessed enough to listen to an early recording of Kelly Derrickson’s second full length album, I AM, released on 4/13/17 through Star Tribe Records and recorded in Nashville, Tennessee. I hung out with the ravishing songstress and drummer/percussionist/co-writer on the album, Benny Cancino, Jr., in Kelly’s glorious backyard in Palm Desert, California. I was taken aback by the first cuts and the essence of the lyrical content. We listened to the album in its entirety. How lucky can a music writer be? Being able to sit there with the artists, while listening to the unreleased original music, with the artist watching your every reaction and expression. Before and after each song, Kelly, the 2015 winner and 2017 Coachella Valley Music Award nominee for ‘Best Country Band/Artist,’ explained the meaning of the lyrics and her intentions. It was truly an honor. 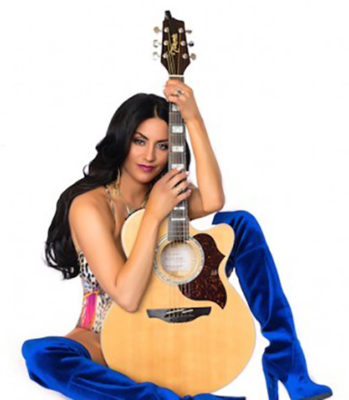 With the help of uber producer Ronnie King, Kelly has given life to a new sound, ‘Country Tribal Rock’. I AM is elevated from Kelly’s first album, Warriors of Love. She continues to be recognized and honored. Derrickson is nominated in her hometown of Kelowna, Canada for ‘Best Band/Musician’ in the ‘Best of Kelowna 2017’. Derrickson will also be celebrating her new release with an album release party on Friday, July 21, 2017 at Two Eagles Golf Course in West Kelowna, British Columbia. Below is my album review of I AM.

This is a great mid-tempo opening song; from the banjo intro to the end it’s catchy. The clap beat is fitting and grabs the listener. The song is currently at #25 & climbing the Top 40 Indigenous Countdown at the time of this writing. The lyrics are pertinent to what is happening right now around the world. The song was inspired by poems written by Kelly’s 12 year-old nephew Matthew Derrickson. Producer Chip Martin performs all instruments on this song as he does on much of the album. WOW!

Many indigenous communities refer to North America as Turtle Island. In this slower tempo song Kelly preaches the struggle the continent has endured and questions our ability to progress in the current environmental and political climate. She implores others to “stand up and be counted.” She uses ‘talk singing’ to communicate what the universe is telling us.

Upbeat tempo with a fast walking pace, Kelly takes us to a place she called home. She paints a vivid picture of a stable family life and loving household. She recalls the love and independence that was instilled in her. Loving the banjo again!

The album’s first ballad is laden with piano. The feeling of being content with where you are and with who you’re with. There is comfort in this song, holding your loving partner and slow dancing is what I envision.

Another great mid-tempo song kicking off with a snare-flam and bass beat, this is a great follow up to “Good Place” with more of a rock feel. Reminding her self of how good she has it. I can imagine the Stagecoach Festival crowd swaying back and forth to this song on the ‘Mane Stage’.

6. “Nobody’s Business But The Moon”

Dark, moody & haunting ballad; the lyrics will definitely cause a stir; talking of redemption after being taken advantage of. You have to stop and read the lyrics on this one. It gave me chills. Storytelling at its finest!

Great drum and chant intro. Kelly once again challenges us to consider what we are going to do about the crimes against Mother Nature.

Once again Kelly takes us to another place. She transforms the lyrics to an emotional scene. We can relate to the story of having that person we looked up to and lost. Reminiscing of the things we used to do but can no longer because of their loss. I can admit I broke down a bit for her conveyance of emotion while feeling my own pain of departed loved ones.

A song I want to see and hear performed live. I’m clapping my hands and singing along to the optimistic pulse; a song of hope and letting go. Acknowledging the need for change and making it happen.

You’ll recognize the intro “10 Little Indians” verse but it kicks into a rock song and incorporates the nursery rhyme cleverly. Kelly sings of the historical bashing of Native people and their heritage while ignoring the impression we make on our younger generations.

The closing song on the album is probably the most relevant. The suicide rate in First Nations & Native American communities is alarming. Approximately 40% of those who die by suicide are between the ages of 15 and 24. And among young adults ages 18 to 24, First Nations & Native Americans have higher rates of suicide that any other ethnicity, and higher than their respective general populations. Kelly tells the story of two young people who see no hope. Kelly empathizes while encouraging others to keep fighting and “make it through the night”. The song was specifically written for the warrior children of her native land but can be applied to any young population. Check out her video for “Suicide Song” at https://www.youtube.com/watch?v=OwGTEqVZrPA.