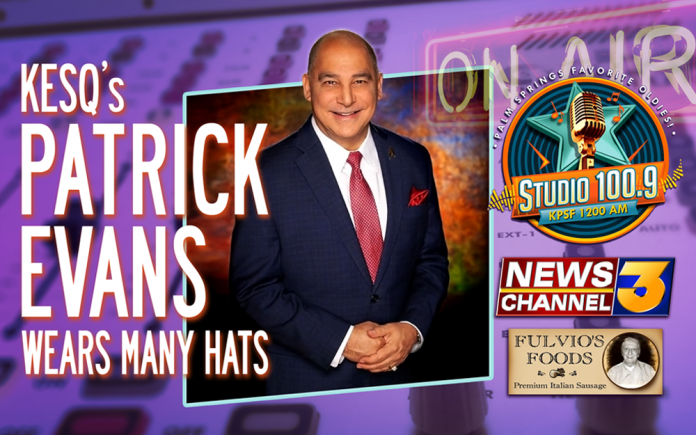 The Coachella Valley has come to know Patrick Evans as a familiar face with a diverse presence in the desert—ranging from television personality to the owner of an Italian food company. Evans has also made his mark in radio, having been named Coachella Valley Best Of’s Radio Personality of the Year for 2020-2021 and hosting a show block on CV 104.3 for five years before the station changed formats.

In August 2002, Patrick moved to the Palm Springs area to help launch the new Coachella Valley CBS news affiliate, where he served as Chief Meteorologist for nearly 17 years. Following the merger with KESQ, Evans can be seen at 5 a.m. to 7 a.m. and 12 noon on News Channel 3 and at 12:45 p.m. hosting “Eye on the Desert.” 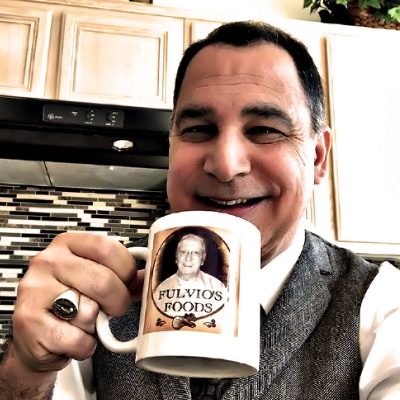 Evans’ Italian foods company called Fulvio’s Foods specializes in gourmet Italian sausages, named after his father Fulvio “Tony” Iachetta, who was born of Italian immigrant parents in 1928. His family brought with them from Italy a rich tradition of great Italian cuisine, and the company pays homage to Fulvio and the foods he taught his family to love.

Evans has now joined the all new Studio 100.9 FM and KPSF 1200 AM radio station. He hosts his own station block as an Afternoon Drive Personality weekdays from 2 p.m. to 7 p.m.

“We play a lot of great music through the decades that appeal to the different demographics in the Coachella Valley. Throughout my news career, I’ve also had a little side gig in radio because the two media work very well together. I am really enjoying the music and connecting with my audience in a different way than what television allows. There’s more freedom in radio and it’s a fun, creative outlet,” explained Evans.

The Studio 100.9 FM and KPSF 1200 AM radio station was established on June 28 of last year, with a primary focus of playing the Top 20 hits of the decades—including tunes from the 50s, 60s, 70s, and 80s. Instead of only playing modern-day hits, the radio station gives older songs a chance to shine with non-repetitive, cohesive playlists every day. The station’s library of music consists of over 33,000 songs—compared to other radio stations that play the same 250 “safe” songs.

“Working at KPSF has been great. There’s a lot of communication between the staff and I. I’m able to tailor the music playlists based on feedback I get from my audience, so there’s a close connection,” said Evans.

In addition to Evans, Grammy winning musician and artist John Tesh also has a program called “Intelligence for Your Life…” from 7 p.m. to midnight, along with a block hosted by Chris Russell.

Rick Ruhl wears many hats at the KPSF station, such as Morning Host, Program Director, and Engineer and Operations Manager. His morning programming takes place from 6 a.m. to 10 a.m. Ruhl has been in radio for 42 years and is a Charter member of the Georgia Radio Hall of Fame. In Atlanta, he worked at WFOM, which was the East Coast version of KHJ.

KQLH 92.5 and KPSF 100.9 reach a combined area from the Mount Baldy territory to the Salton Sea. KPSF’s AM signal on 1200 gets out that far, but the FM stops at Morongo Valley. Ruhl’s morning show is on KQLH, KPSF and KPFV in Pahrump NV. The rest of the day, KPSF covers just the Coachella Valley.

“Mark Westwood and I came up with the ‘favorites’ music format. Our rotation is really not based on decades, but rather the sound of the station. It’s a flow, which is really different from what the other stations are doing. Both Patrick Evans and I can pick our own music for our shows. Corporate stations don’t allow any jocks to do that, plus most are using ‘consultants’ to program the station and don’t live in the area like Patrick and I do. We are locally owned and operated,” explained Ruhl.

Mark Westwood is the General Manager and Owner of the KPSF station. His career in radio has spanned across the Inland Empire for 30 years. Westwood started a radio station out in Yucaipa five years ago called KQLH from the ground up, and the new Palm Springs station is structured similarly to it. 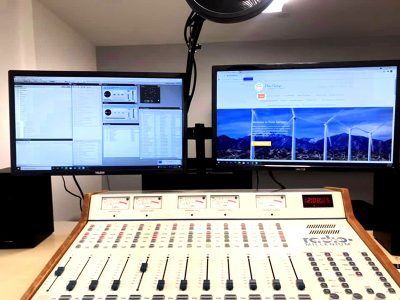 “We play music ‘favorites’. That helps us include a wide range of songs to play for our listeners. I love working in radio and it’s the best job in the world,” said Westwood.

Although less than a year old, the Studio 100.9 FM and KPSF 1200 AM team aspires to break the mold of mainstream, corporate radio stations that play the same music repeatedly. Some goals for the station in the future include expanding the listening audience and getting more involved in the community.

Bringing more up-to-date interaction is a priority for the station. A most recent example was the Studio 100.9 FM and KPSF 1200 AM coverage of the 4.2 earthquake that took place in the Coachella Valley on January 12 that Patrick Evans helped relay to listeners. No other radio stations were covering the earthquake because they run automation with no one in the studio to cover it.

“It’s really important in any broadcast career to understand that each job should get you to your ultimate goal. Have patience, because in this industry right now, there are many opportunities and you just need to seek them out,” shared Evans.

Visit the Studio 100.9 FM and KPSF 1200 AM website at kpsfradio.com to view the show schedule or reach out to the station.