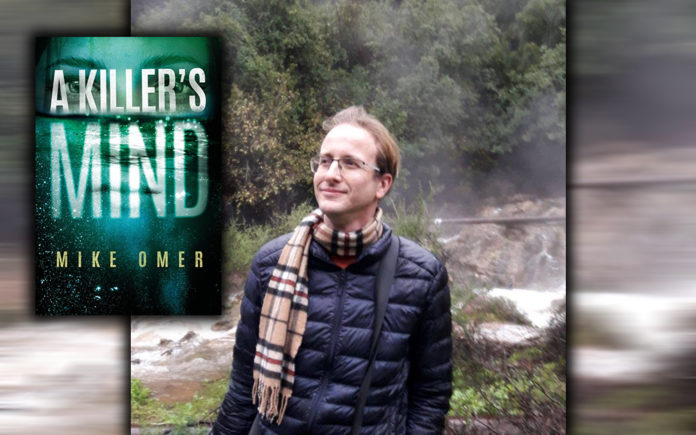 It’s uncomfortable to imagine a job description where the requirement is to get into the headspace of a serial killer.  To be successful and maintain your sanity at that profession, it must take a unique skill set.  In Mike Omer’s A Killer’s Mind (Thomas & Mercer, 370 pages), one killer’s profile merges with another.

This is the first installment of the “Zoe Bentley Mystery” series.  Zoe is a young woman who works independently as a forensic psychologist.  She is well qualified with a Ph.D. in psychology and a J.D. from Harvard.  She is an FBI consultant with a good track recorded, but she is not an FBI agent, which renders her powerless to act on her suspicions.

When FBI agent Tatum Gray requests Zoe’s expertise on a bizarre case where several murders appear to be linked, the two misfits team up to determine the modus operandi of what is clearly developing into serial killings.

The killer abducts women and then embalms their bodies.  After he is finished with his victims he poses them in public places as if they are still alive.  He is experimenting with the women and has yet to get what he wants.

Gray has been “promoted” – moved from California — because of a prior mishap that left the suspect dead — a hero to civilians, but reckless and dangerous to his federal bosses.  Now he must redeem himself and play by the rules or lose his job.

After the Chicago police department struggles to get a handle on the bizarre killings, Gray is assigned to the case, where he believes a high-paid, celebrity profiler is steering the case in an erroneous direction.  With wrong details, the police might overlook the actual killer and focus on someone else.

Zoe joins Gray in Chicago where she quickly discredits the celeb profiler and redirects their investigation.  Reluctantly, she partners with Gray and the two are like oil and water.  Zoe is eccentric and keeps to herself.  She loves what she does and that makes relationships difficult.  But, Zoe is also troubled and likely on the Asperger spectrum so she has no one but a younger sister who understands her.

As a teen, Zoe lived in a small community where a serial killer had murdered three girls that she knew.  Suspicious of a neighbor, Zoe profiled the man and then found physical evidence, but no one believed her.  The police had already arrested a kid in high school.  The boy committed suicide and the case was closed.  The killer left town but he never left Zoe.  This experience not only impacted her reality about the world, it defined her future.

I appreciated that Zoe and Gray were not willing to let the police shape the facts to fit possible suspects or make the evidence bend to a person of interest.  There were a few provocative details about the motives of serial killers, like the difference between power and anger killers.  It could have used a lot more.

The story is told in short chapters and since this is the first in a series, the reader is introduced to the main characters, their backstories and the people who matter most in their lives.  Author Omer does not reveal everything about the protagonists’ past and he concludes the book with a taunt from Zoe’s nemesis to keep us intrigued and committed to the next installment.

The narrative is written in an omniscient voice, putting the reader in the head of Zoe, Gray, and the killer.  This is an uncomfortable place to be and the book is explicit about the murder’s actions, before, during and after his crime.  It’s hard to take.  Omer drops the reader into the killer’s world without us knowing it right away and soon you are in a house of horrors.

Zoe is not a likeable protagonist, but it fits the nature of what she does.  As an educated, experienced and often arrogant expert, Zoe finds she can slip and make mistakes.  She doesn’t want but needs Gray’s help, and they become effective partners.

I’m not sure I want to go back into the minds of Zoe’s killers, but I do have a curiosity about how her ongoing teenage nightmare will be resolved.