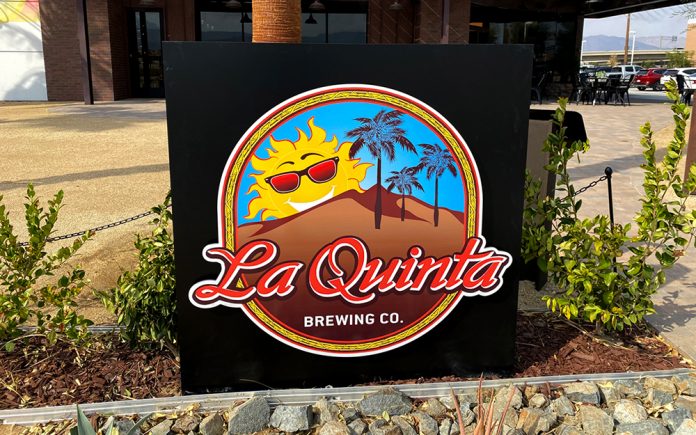 When La Quinta Brewing owner Scott Stokes first announced the building of a new Brewery and Tasting Room back in June of 2019, he knew the project would take the better part of two years to complete. What he couldn’t have foreseen was what those two years would entail. Brewery expansions are almost always an onerous task, having to deal with a pandemic during construction is practically unfathomable. 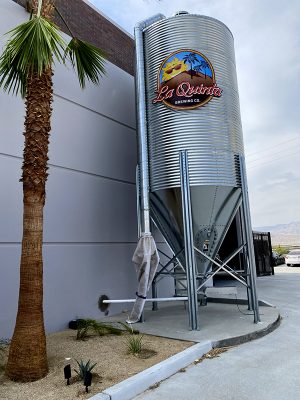 Team La Quinta persevered and the result on 74714 Technology Drive in Palm Desert is simply stunning. Located on the southwest quadrant of the I-10 and Cook Street, the gleaming new building shines like the oasis that it is. Combining exquisite brickwork, steel, and wood, the expansive (and dog friendly) patio invites guests to discover the treasures within.

Upon entry I was struck by the inherent beauty of the Tasting Room design. The two-section bar and draft beer system dominate the western wall, separating the bartenders and guests from the bustling kitchen. Yes, I said kitchen…more detail on that later. The rest of the interior, with its beautifully swirled concrete floor is a mixture of four and six-seat tables as well as long community tabletops. Regular patrons of the original facility on Wildcat Drive will be thrilled with the amount of room now afforded guests.

New amenities bring loosened rules and the new establishment is now much more family friendly than the original. The Tasting Room opens at 12pm daily with table service as well as the aforementioned full-service kitchen. The menu is traditional pub grub, but the food exiting the kitchen is more than visually appealing and is borderline culinary delight.

We started with the Large Soft Pretzel, because pretzels and beer are a staple for those of us living and breathing the beery life. Thanks to ample amounts of Poolside Blonde cheese sauce and honey mustard, this particular pretzel never stood a chance and was quickly vanquished. I’ve made a mental note that next visit must include the Poutine off the Starters Menu as several passed us by and the wedge fries, cheese curds, brown gravy, and bacon were a sight (and scent) to behold. 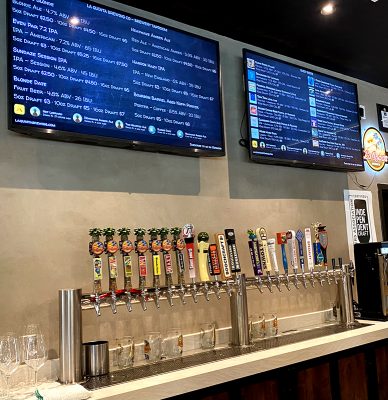 My tablemate, another beer industry vet, opted for Fish and Chips as his main course and I dove straight into the LQBC Burger and its American Wagyu patty nestled with the usual accoutrements including a delightful chipotle aioli. The Fish and Chips were wonderfully prepared with a crisp outer shell perfectly protecting the delicate sole inside. It arrived with both malt vinegar and a housemade tartar sauce which was tangy and fresh. The burger arrived cooked to my specs and didn’t disappoint. The Brioche bun did its job in containing all the juiciness and thick cheddar cheese really held everything together.

The beer selection has been expanded as well to include guest beers to compliment the range of styles produced by La Quinta’s Brewmaster Scott Grabbe. Scott is currently featuring some great beers to beat the summer heat such as Poolside Blonde, Sundaze Session IPA, and Blonde Date (Poolside with, yup, you guessed it…). No brewery lineup is complete without an IPA, and they pour my personal favorite year-round LQBC beer, Even Par 7.2 IPA as well as the aptly named Haboob Hazy IPA. Maltster fans also have choices with the easy-drinking Heatwave Amber Ale and Bourbon Barrel Aged Koffi Porter for those looking to join the dark side. 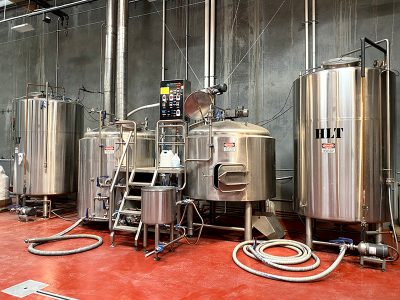 The guest beer selection is well-rounded and shows plenty of effort in showcasing the myriad of styles that has come to define beer in 2021. Fourteen guest handles stand at attention, each awaiting their particular call to duty. On the easy-drinking side, you will find a Hefeweizen from Beachwood Brewing, a Pilsner from Boulevard, a Belgian White from our good friends at Stone, and a beautiful citrus Blonde from Figueroa Mountain. Rounding out the lighter offerings is House Beer, a straightforward, no-nonsense Lager which will appease even the ficklest of Bud and Coors drinkers.

Heading to the hoppy side of life, I was overjoyed to discover not one, but two Pale Ales on tap. While the Alesmith tap is pouring San Diego Pale Ale .394, which is a staple in these parts, discovering Topa Topa Level Line Pale was akin to a little gift from the Beer Gods. The only IPA on the guest side is Bell’s Two Hearted, which has been named the America’s Favorite IPA for so many years running, even industry lifers can recall how many it really is.

Craig, the beer-buyer, also had some fun with a few beers not normally seen in these parts, starting with Pepper & Peaches from Claremont Craft Ales. Officially classified as an IPA, this refreshing bit of sunshine is brewed with copious amounts of peaches and pink peppercorns. The combination sounds strange coming off the tongue, but that same tongue is amply rewarded with a true one-of-a-kind beer. Second Chance in San Diego delivered nicely with a fruited sour they named Fistful of Gummies. Lastly, Abita in New Orleans is the source of Andygator, a superb Bock served in a 10oz glass due to its higher than average ABV.

The menu contains Sweet Treats, but dessert will have to wait until a future visit as my LQBC Burger was more than adequate for my dinner. Other menu options include sides including rings and potato wedges and selections for the kiddos as well. Overall, it’s well showcased pub grub, perfectly suited to a grown-up Brewery’s Tasting Room.