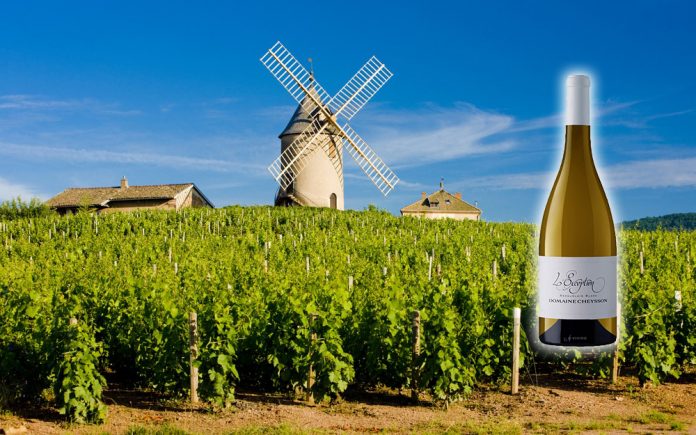 Not that you’re asking, but just in case one might be thinking that a Chirouble Beaujolais is in fact produced around the Chernobyl region that experienced the nuclear accident disaster in the Ukraine over 30 years ago, you can ease your mind.

However, known as Beaujolais Blanc, Chardonnay grows exceptionally well in Beaujolais—it’s just much harder to find.  Only one percent of the wine in Beaujolais is white.  Rounded and fruity, the Beaujolais Blanc is seductive.  In other words, this is the newest sexy wine to show off at your patio parties this summer.

The Chardonnay vineyards are small (1 hectare), all of which are in Chiroubles—the highest elevation of all the cru Beaujolais appellations.  The soils are granite, which maintains the heat nicely and give the Chardonnay a more balanced acidity.  It is generally aged in stainless steel, so you get rich flavors without the influence of oak.

So let’s talk about the white elephant in the room: the “ABC” club or “association” that pines for any white wine around as long as it’s Anything But Chardonnay.  You may well be a member or know someone who is.  As I’ve commented before, although I’m not a big fan of Chardonnay—I don’t hate it!  But members of the ABC club do dislike it no matter what, in face of some of the most delicious Chardonnay on the market.  I think that’s crazy—but as you folks point out: it’s your palate!

But as a duty to you enthusiasts—no matter what your ilk, I must share any wonderful wine that comes my way and are just so fabulous to experience.

In the glass, the golden color of the Blanc charms the eye before enchanting the aromatic nose of citrus and white flesh fruit.  The palate shows various floral and mineral notes with a refreshing and pleasing finish.  It’s a medium to full bodied wine, which means it can carry an entire meal.

Fish and white meat are the obvious pairing choices, but whites from the Beaujolais and Beaujolais Villages AOCs are as good with appetizers as they are with a fish or rabbit starter, for example. They also bring out the best in goat cheese or desserts like red fruit zabaglione or exotic fruit tiramisu, and are sure to jazz up a chestnut tart.

Beaujolais white wines are produced in the Beaujolais and Beaujolais Villages AOCs by nearly 500 of the region’s 3000 estates. About 2 million bottles are produced a year.  Currently there is an increasing in demand by connoisseurs who love a new exciting white; the personality of these wines is surprising and is becoming more and more popular.

Jean-Pierre calls his Beaujolais Blanc, “L’Exception,” because he makes such a small amount of it. L’Exception takes the name Beaujolais Blanc in Chiroubles because it’s THE exception. Yes, this 100% Chardonnay is sourced from a precious small vineyard plot, it also means that he doesn’t make all that much. If you are a fan of unoaked Chardonnay, well, L’Exception is one delivering a juicy mouthful of white peach and apricot notes.   Cheers!