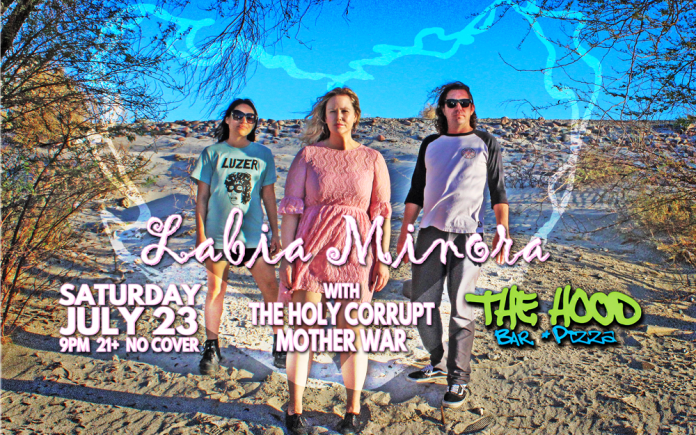 It’s only been a few months since the grungy, punky rock trio, Labia Minora introduced themselves to the Coachella Valley music scene. Somewhat born through the pandemic, this project may be green but all three members are no strangers to performing in local bands and most of the songs they are currently performing at their shows have been honed by singer/songwriter, guitarist and front woman, Karla Anderson who plays solo, acoustic gigs and was a founding member of The After Lashes.  At some point in the not so distant past, drummer Crystal Hernandez and bassist Travis Rockwell were able to sprinkle in their unique musical perspectives on Karla’s songs and that is when the magic started to happen.

I have had the pleasure of experiencing Labia Minora live twice now and to put it simply, their shows are a lot of fun. There’s a grimey, frankness that gives them an edge that is balanced out with a vibe that refuses to take them too seriously. Having started a bit of a buzz throughout the desert in recent months, Labia Minora has no lack of upcoming gigs on their schedule so I would highly recommend making the time to check them out.

I recently sat down with Karla, Crystal and Travis over some cocktails and eventual karaoke where we, at some point found the time to conduct an interview.

CVW: “You guys are still a brand new, baby project so there isn’t much history to talk about since I’m sure you guys are figuring out what your plans are as a band so, how did you guys get together in the first place?”

Anderson: “Sometime in 2019 I just got a wild hair up my butt and decided that I wanted to jam with some people, but  I had no intentions of starting a band. So, I made a post online and someone tagged Crystal in it who I had actually seen before because she played in Fight Like a Girl and —- and I thought she was just badass. We did eventually end up jamming and she expressed that she didn’t really want to be in a band at the time but I was like, ‘I really want to be in a band with her!’  I sort of jokingly harassed her about it from time to time and eventually got my way!”

Anderson continues: “It was on my birthday in 2020 during the pandemic when I decided to invite a few people over, we sat outside and I had a ten person limit, and Crystal was one of those people. Then, randomly out of nowhere Crystal said, ‘You know what? F*** it, let’s start a band.’”

Hernandez: “I missed it. I had been on a break for a while but I really missed playing and performing. I needed that spark again. When you are a musician and you haven’t been doing what you love in a long ass time, your soul feels like it’s dying. You get sucked into the work, eat, sleep and repeat and you forget what used to set you free. After hanging out and jamming with Karla for a while I realized this is something that I needed to be doing for myself.”

CVW: “How did the guy who is well known as a longtime member of local legends, The Hellions end up completing the trio?”

Anderson: “I actually used to get together with Travis to jam occasionally and a couple of times the three of us actually got together for the same purpose. Travis had some really cool stuff that he had written, no lyrics just riffs and stuff that I was playing around with some lyrics for but then the pandemic happened and everyone went their ways and things just sort of got put on hold. As soon as Crystal gave me the green light, I was like, ‘Let’s do it!’ and hit Travis up.”

Rockwell: “I had moved up to the high desert for 10 months or so and had moved back down when they hit me up I was ready. I think that was about a year ago. We got together for pizza and started putting our heads together.”

CVW: “Karla I know that you have quite the arsenal of songs under your belt that you have been performing in one form or another for years. At times solo, other times with The After Lashes and now with Labia Minora. Let’s talk about that.

Anderson: “I officially started writing songs when I was 18 or 19. So yeah, I have a lot of songs. Some of them are unfinished ideas. So far, all the stuff we have been doing are all the songs that I have written. I pretty much record them myself and send them the links and tell them to do whatever they want with them and the results are what they are.  We also have some really cool bass driven stuff that Travis has written that we are working out and should be ready to perform at our upcoming shows.”

Rockwell: “I’m bringing in some songs that I had done originally with a band called Red Sands that is no longer a thing but I think what we are doing with them now is working out really well. It will be fun for sure.”  CVW: “I’m sure that people are going to be curious about the band’s name.”

Hernandez: “During High school, one of my best buddies, Juan Chavez was working for Planned Parenthood where they paid him to do sex-ed courses. Basically we were going over all of the parts of the vagina which included the labia majora and labia minora. What’s funny is that he pronounced it differently but either way I liked the way it sounded and thought to myself, “Dude! That would be a sick band name! And here we are!”

You can catch Labia Minora along with The Holy Corrupt and Mother War on Sat, July 23th, 9PM at Hood Bar and Pizza in Palm Desert.