“I don’t consider myself a pessimist. I think of a pessimist as someone who is waiting for it to rain. And I feel soaked to the skin.” Leonard Cohen

It was his reality – soaked to the skin with a very open and public swim against the tides of manic depression.  Perhaps pain is the axis point for many artists, but no one recycled the struggle and agony of the human experience like Leonard Cohen.  While some of our creative heroes can pale off stage in comparison to their public image, Cohen was the real deal – the purest definition of authenticity according to many who knew him. Understated and under celebrated for much of his career, Leonard Cohen had 15 year old girls weeping during his performance at Coachella Music and Art Festival in 2009. 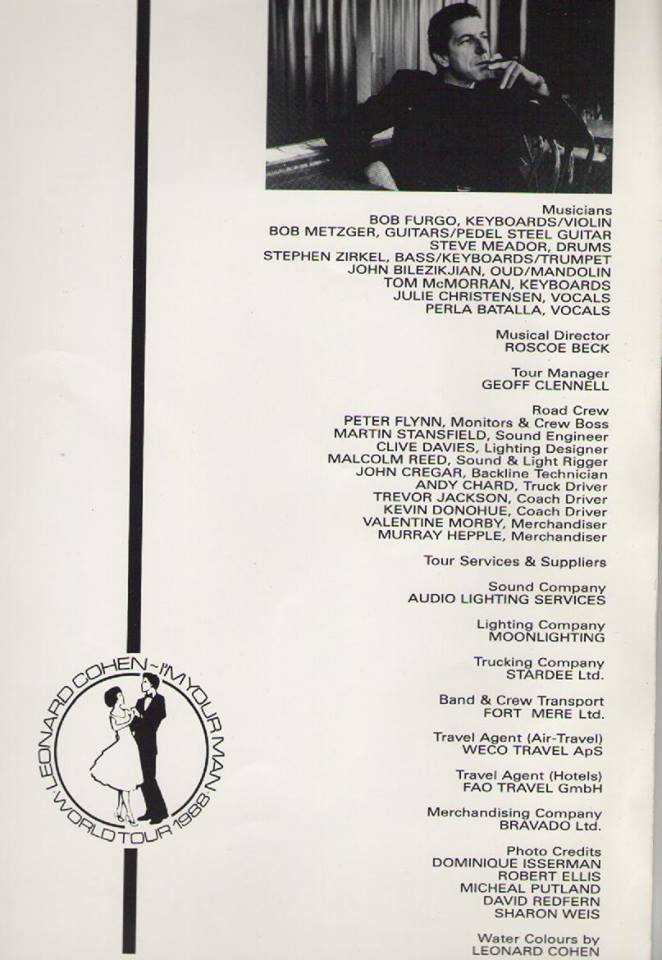 Proof of his authenticity and humanity rests in those who recorded and toured with Cohen during his sudden rise in 1988 and who were there for him as his body began to fail him.  Bobby Furgo, a highly respected songwriter, multi-instrumentalist and recording artist living in California’s high desert, was one of those people.  Though it took him a while to process his grief, he was finally able to share with CV Weekly this weekend much of the footprint Leonard Cohen left on his life and those closest to him.

“I started with him on the ’88,  I’m Your Man Tour.  It came with a marked increase in popularity and sales.  It was the beginning of everything it seemed.  When we flew to Germany for the first European tour, we were met with television cameras in the air port.  That had never happened before.  His album was as big as Pink Floyd’s The Wall and U2’s Battle and Hum.  It was a big deal.  It was a shock to me because we had rehearsed hard for two weeks before we went, and honestly, the songs were all sounding the same.  Then all of a sudden the guy was huge.  It was my first big gig at 36 years old…I didn’t know just how big it was.  It has turned out to be a very gracious calling card for the rest of my life.”

“I got to record on The Future. Leonard wrote a song called “Closing Time” for me to play fiddle on. We flew to Toronto to do a music video for it and it went quickly and very well.  I then went with him to the Juno awards (the Canadian Grammies) and it won for best video.  Leonard also won Vocalist of the Year.  He jokingly said, ‘Only in a place like Canada would a guy who can’t sing be awarded this honor.’  Gordon Lightfoot, Buffy Sainte-Marie, k.d. Lang and Celine Dion were all there.  I was really hoping to catch a glimpse of nominee, Neil Young, but he never showed.”

“In ’93, he went into Austin City Lights and, completely sober, expressed his feelings about the world.  It was breaking his heart.  His biggest concern was how we all needed to learn how to love one another.  Learning to be kind was his core message.  It touched everyone.”

“Leonard treated everyone the same in all walks of life.  I remember we walked by a guy in Amsterdam who was homeless.  Leonard said, ‘Excuse me my friends,’ and then walked into a McDonalds and bought him a meal.   The crew and the band were treated the same as himself.  He would only travel with us. He wouldn’t take limos and didn’t want special treatment.  We traveled together and stayed at the high end places like the Ritz or Four Seasons, each with private rooms.  The crew got the same treatment as the band. 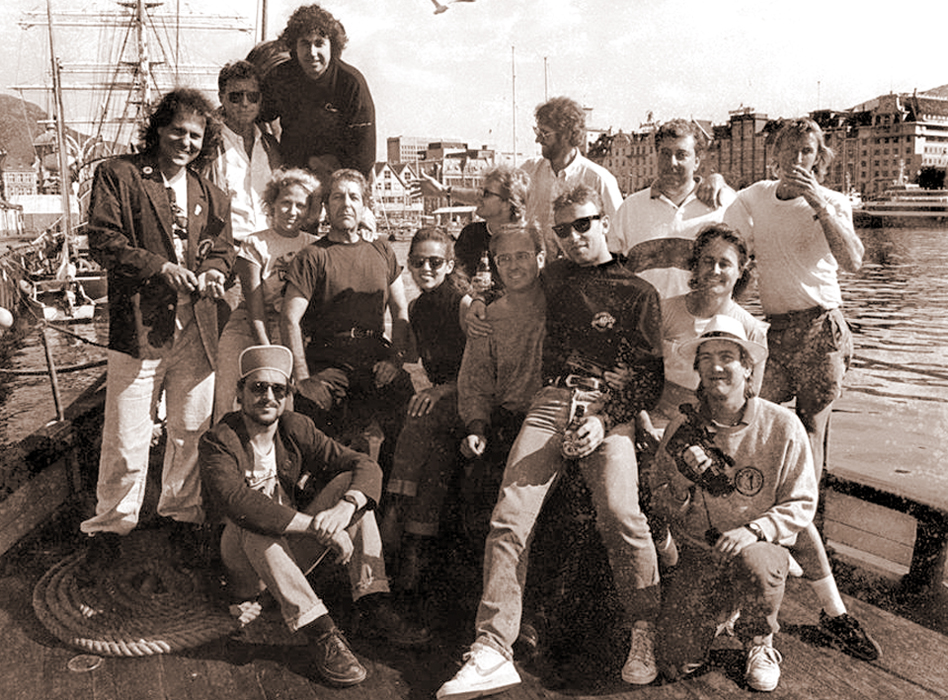 Once in a while he would loosen up – he had a great sense of humor – but most of the time, he was very guarded, and censored every word.  Leonard made it very clear that we were his missionaries.  We were not in ‘show business.’  He was extremely urgent about that in the ’93, for The Future tour.  He said, ‘I have a very important message I have to give to everyone.  We are missionaries.  Don’t act like we’re part of showbiz.  We’re presenting messages that are beautiful.’  There were songs like “Democracy” and “Dance Me to the End of Love” (referencing the dance of life).  He was not religious, but he was very spiritual, especially in regard to the condition of man – the ‘human experience’ that he always referred to.  Leonard recommended, “If you are Catholic, if you are Jewish or if you are  Presbyterian, just be a good Catholic, Jew or Presbyterian.  Embrace it,  but don’t be looking for a secret answer – there’s no secret answer.'”

“It’s public information that Leonard’s dad died when he was 9;  he was a tailor and in the garment business.  Leonard carried on that tradition along with his old school traditions.  He was well read in the bible both new and old testament. You would never catch him speaking trendy; he was very formal in his speech, as we all know.  He was writing books and poetry but he joked that he could meet more women if he sang.  He never picked on anyone except himself or himself as a Canadian.  He’d say things like, “How do you get 100 wild drunken Canadians out of your yard?  You ask them, “Can you all go home please?”‘

“Leonard was, as many know, manic depressive. He also suffered from stage fright.  Historically they say it’s a great stimulus to greatness.  But in recent years, Leonard told me that it had been lifted from him.  I said, ‘Wow, that must be from all that good hard work.’ By hard work, I meant discipline (all the work he’d done spiritually).  He said, ‘No, it was by grace.'”

“Like Johnny Cash, he like black, and would never wear a Rolex.  He drove a Honda.  When he passed, he had a 95 Nissan Extera in his driveway that he couldn’t drive anymore because of his physical disabilities.  He was very depressed about not being able to go anywhere. He’d always been able to go anywhere.  The pain was terrible at the end. He had a couple of compression fractures in his spine, had cancer and was allergic to pain killers.  He had to white knuckle it or use edible marijuana. And he was not able to sleep.  I was one of the only ones he’d call in to visit for a long time.”

“I had always been drawn to darker music. Leonard gave me a vehicle to ride on that I loved 100 percent.  He taught me how to record. He even gave me a lesson in poetry.  He said, ‘Just read the words, don’t act it out or sound dramatic, just tell the words.’  Leonard took us all to atmospheres and things we never felt before as individuals or as a band.”

“I recorded with him earlier this year, and I had the best conversation I’ve had in my life with anyone. He was frail and in very poor health.  He was in an orthopedic chair having trouble standing let alone walking.  He weighed about 110 pounds and told me he’d almost died a month or two before.  But his mind was crystal clear.  He was really leaning into his recording projects and his writing.  My favorite joke of the day was when he was bragging on how good looking his son Adam was (he was very proud of both his son and daughter). He said, “When Adam goes into a bar, he doesn’t just leave with the prettiest girl, he leaves with everyone.” I asked him, ‘Man, you’re writing with such great understanding of the bible and Christianity – what’s your take on Jesus?’ He said he loved Jesus with all his heart. He was someone who cared for and rooted for the little guy – the underdog.”

Bobby Furgo has recorded, toured and/or played with Eric Burdon and The Animals, Nancy Sinatra, Lee Hazelwood, Pat Boone, Love and Rockets, Grant Lee Buffalo, Dolly Parton, Freddy Fender, Gene Pitney, Hank Tompson, James Burton, Jim Dickinson, Wanda Jackson. He has made appearances at Carnegie Hall, Royal Albert Hall and played on Jay Leno, the Tonight Show, and the Grammy winning movie, The Wonder Boys.  You can find him doing what he loves most, most of the time, with the music and memories of his dear friend still in his bones.  Few musicians on this earth can play with the intuition and respect for the song as Bobby Furgo, and one can only assume Mr. Cohen saw that from the beginning.

You can catch Bobby Furgo making some special local appearances this weekend:

Friday, November 25 at Big Rock Pub at Indian Springs Golf Club from 9 pm – 12 am with Lisa and the Gents.

Sundays at Pappy and Harriet’s in Pioneer Town with The Sunday Band starting at 7 pm.