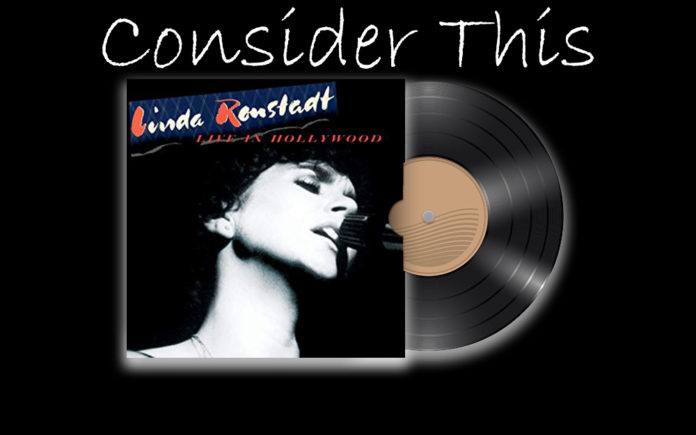 For better or worse, the female vocalist that defined L.A. Rock in the ‘70s was Linda Ronstadt. The Tucson, Arizona native was born in 1946, the third of four kids. Her father, Gilbert, came from a pioneering ranching family and was English, German and Mexican. Her mom, Ruth was originally from Michigan. Her father, Lloyd Groff Copeman was a prolific inventor who created early forms of the toaster and microwave as well as the grease gun and electric stove.

In 1960, at age 14, along with her brother Pete and sister Suzi, they began performing around town as The Three Ronstadts. It was around this time she met talented musician, Bobby Kimmel and local banjo player Richard Saltus. Along with Pete and Suzi, the five-piece briefly became The New Union Ramblers. Bobby relocated to Los Angeles and kept in touch with Linda, encouraging her to pursue a career in music, once she finished high school. She completed a semester at University Of Arizona before announcing to her parents that she was heading to L.A., (she left that same night). Once she arrived, she and Bobby formed the Stone Poneys with Bobby’s new pal, Kenny Edwards.

Discovered while rehearsing in a Venice Soul Food restaurant, the trio was signed to a deal with Capitol Records and made three albums in the span of just two years. Their (definitive) version of Mike Nesmith’s “Different Drum” made it to #12 on the Billboard charts. Just as the band was coming apart at the seams, it was clear that Linda Ronstadt’s star was on the rise.

Her solo debut, Hand Sown…Home Grown arrived in 1969. Along With male contemporaries like Mike Nesmith, Rick Nelson and Gram Parsons, her sound mined myriad influences; Rock, Folk and Country. At this point she was still making ends meet doing voice-overs on commercials.

Her next three albums, Silk Purse, Linda Ronstadt and Don’t Cry came in quick succession. Preceding Don’t Cry she assembled a touring band that almost immediately became the Eagles. Although she received her first Grammy nomination for a song off the Silk… album,  it was her final Capitol release, 1974’s Heart Like A Wheel, that catapulted her to stardom.

The record hit #1 on the Billboard charts, her singles, including a cover of the Everly Brothers’ “When Will Be I Be Loved” crossed over to the Pop and Country charts. Nominated for four Grammies, it won in The Best Country Vocal Performance Female category. For the remainder of the ‘70s, Linda could do no wrong. Signed to the artist-friendly Asylum label, she continued her winning streak with epochal efforts like Prisoner In Disguise, Hasten Down The Wind, Simple Dreams and Living In The U.S.A.

Rather than remain locked into one genre, Linda followed her muse. Drawn to the emerging Punk and New Wave style, her Mad Love album from 1980, featured three Elvis Costello songs (and had him grumbling all the way to the bank). The record made it into the Top 10, but it was the first time she didn’t receive unanimous critical acclaim. Punks thought she was poaching their music and longtime fans were a little puzzled by her embrace of this snotty style.

That didn’t phase Linda, that same year she went to New York to perform the lead in “The Pirates Of Penzance,” opposite Kevin Kline. Turns out, her voice was a natural fit for Operetta, hitting her marks as a coloratura. Her efforts garnered a Tony nomination and she later appeared in a movie version of the production.

For the remainder of the ‘80s she deftly pivoted from one genre to the next. She recorded three albums of standards, orchestrated and arranged by Nelson Riddle. Although Harry Nilsson, Willie Nelson and Carly Simon had already issued albums that delved into the Great American Songbook, they never matched the success of Linda’s lengthy foray. Next up she teamed with Emmylou Harris and Dolly Parton. The pals had sung together informally for years, but on the album Trio, took a deep dive into Traditional Country and was a hit. It climbed to #1 on the Country charts and #6 on the Rock charts. (Trio II was released in the late ‘90s).

That same year, she honored her Mexican-American heritage by partnering with the three greatest Mariachi ensembles; Mariachi Vargas, Mariachi Los Camperos and Mariachi Galleros De Pedro Rey. Cherry-picking classic Ranchera songs that she’d grown up listening to (her Aunt, Luisa Espinel, had been an international singer back in the 1920s), the result was Canciones de Mi Padre. It became the biggest-selling non-English language album in American history. Influenced by standard bearers like Lola Beltran and Lalo Guerrero, it won the Grammy for Best Mexican/Mexican American Album in 1988. (She followed up in 1991 with Mas Canciones).

Following these rewarding expeditions, she continued to make albums from the late ‘80s until 2004. She had a massive hit with 1989’s Cry Like A Rainstorm, Howl Like The Wind. Her subsequent efforts, Winter Light, Feels Like Home, Dedicated To The One I Love,  and We Ran typically mined the Country/Rock hybrid she helped invent. She also collaborated on albums with Emmylou Harris and Cajun singer Ann Savoy. Her final studio album, Hummin’ To Myself was a Traditional Jazz effort.

Although she had some fairly famous romances, Linda never married. In 1990 she adopted a daughter, four years later, she adopted a son. She officially retired from the music business, and wrote a musical memoir, “Simple Dreams.” In 2013, she revealed she had been diagnosed with Parkinson’s Disease. The loss of muscle control, has sadly, left her unable to sing. With a career that has spanned 28 studio albums, 10 Grammy awards and a long-overdue induction into the Rock And Roll Hall Of Fame, she has never released a live album. Recently tapes were discovered from a concert she filmed for HBO in 1980, they’ve now been released on CD and LP as Linda Ronstadt Live In Hollywood.

The album opens with a rollicking take of “I Can’t Let Go.” A ‘60s chestnut that was originally a hit for the Hollies, Linda’s version strips away the polite British harmonies, revealing a taut, urgent Rocker that features Byrdsy guitar riffs and a prickly solo on the break. Although the lyrics’ chart a course of romantic betrayal and equivocation; “When I think of how you love and desert me, I’m the broken-hearted toy you play with,” her agitated vocals tell a different story.

Although this concert was meant to promote her latest album, Mad Love, the songs in this 12-song set cover the gamut, sometimes in slightly recalibrated form. Take “It’s So Easy” and “Hurts So Bad” from her 1977 juggernaut, “Simple Dreams.” The former, benefits from a more muscular arrangement as well as her playful vibe. Anchored by a four-on-the-floor beat, grooving bass lines, stuttery guitars, silky organ colors and plenty of cowbell, it locks into a Latin flavored lilt on the break. Although Buddy Holly wrote the song, Linda took ownership two decades later.

“Faithless Love,” from “Heart Like A Wheel,” is brilliantly showcased.  Written by J.D. Souther, this Soulful back-porch ballad opens with finger-picked banjo notes and her homespun vocals. As the tune progresses, electric piano and lonesome pedal steel wash over the austere arrangement. But the focus remains firmly on the elegant heartbreak of lyrics like “Faithless love will find you, and misery will entwine you.”

“Willin’,” the Trucker’s lament from Little Feat’s first record is another tune Linda took possession of early in her career. (Although it’s hard to picture her as a long-haul trucker). Cascading acoustic guitar is buttressed by twinkly piano and a Rock Steady rhythm. She completely imbues lyrics like “I’ve been from Tucson to Tucumcari, Tehachapi to Tonapah, driven every kind of rig that’s ever been made/And if you give me weed, whites and wine, and you show me a sign, I’ll be willin’ to be movin’.”

Finally, “You’re No Good” is the sultry kiss-off that allows Linda’s band to shine as much as she does. Strafing guitar riffs connect with a handclap beat, menacing bass lines and curve-hugging keys. With full command of her vocal prowess, she offers a stinging rebuke, then fully steps back and cedes the spotlight to her band. Dan Dugmore on guitar and pedal steel, bassist Bob Glaub, drummer Russ Kunkel, ex-Little Feat-er Billy Payne on keys, superstar guitarist Danny Kortchmar, and old Stone Poney compadre, Kenny Edwards on banjo, backing vocals and guitar. More backing vocals were provided by singer-songwriter Wendy Waldman and Peter Asher (who’s day job was manager to Linda and James Taylor).

Other stellar tracks include the fluttery “Just One Look,” the breezy self-deprecation of Warren Zevon’s “Poor, Poor Pitiful Me,” the Punk-y attack of “How Do I Make You,” (written by the desert’s own Billy Steinberg), and the rippling Rock N’ Roll travelogue of “Back In The U.S.A.” The album closes with an intime reading of “Desperado,” featuring just Linda accompanied on piano.

Live In Hollywood is a short 40 minute set, meaning Linda chose to leave some of the songs on the cutting room floor. Hopefully, one day the whole concert will be made available. Let’s face it, Linda Ronstadt could sing the phone book and it would be as compelling and nuanced as the songs she sang about emotional treachery and misplaced affection. It’s sad that she can no longer make music. But at least she’s left us this.