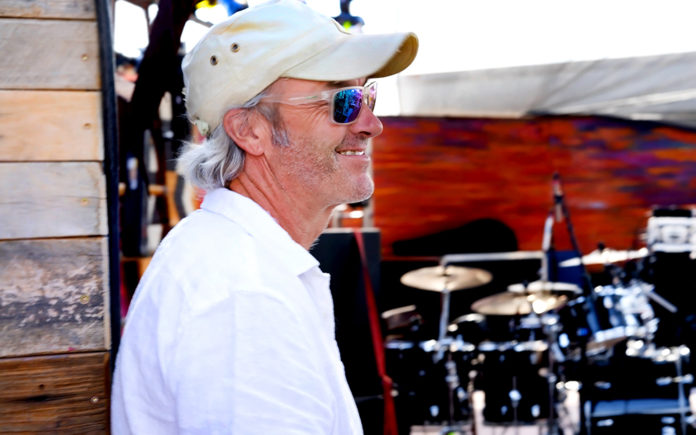 Merriam-Webster defines an egalitarian as someone who believes in the removal of social inequalities amongst people whether it be related to social, political or economic affairs.  The way in which Barnett English, founder and curator of the Joshua Tree Music Festival, leads his life and the operation of the festival that he started is a true example of this philosophical approach in action.  Even the slogan for the Festival says this, “Live/Love Like there is No Tomorrow”.

This festival is not about the money to English.  “As long as I can put a roof over my head and have the ability to put my daughter through college, I’m good,” he professes.  English shares how he has lost money on the festival at times over its seventeen-year history but he is “cool with it” as the festival helps many of the High Desert’s finest performers by providing them with a venue that showcases their prodigious talents.  It also provides a rare chance for festival-goers to see performers from around the world that would not normally tour the United States.

English is serious when he says that it isn’t about the money.  It is about sharing the wonder, beauty and spirituality of Joshua Tree with an ever-growing community of kindred people.  At least for a weekend, everyone at the Festival gets a chance to experience a communal society where love and positive vibrations are shared.  Think of it as a Burning Man for people with children, the need for a shower and bathroom, the desire for a little yoga or meditation and an interest in really good music without the annoyance of large crowds or commercial influences.

With no more than 1,500 attendees over the four-day festival, the spirit of the festival is unlike any other.  Festival-goers can stay and camp, bring your own RV or rent an RV for a night or the entire festival at a cost that can be as little $45/day per adult while children 10 and under are free.  For those who are tight on cash and cannot afford any amount yet wish to attend, English will put you to work as a volunteer at the festival.

Like many desert dwellers, English is a transplant from Kentucky.  After graduating from the University of Indiana, English moved to California in 1986 where he worked in a number of sales roles in the advertising and graphic design field.  On his 30th birthday, he decided that more traditional jobs were not working for him and started a coffee cart business.  At present, English attends 25 festivals a year with his business.

In 2002, while working at a Diggery Doo Festival at the Joshua Tree RV Campground, English fell in love with the Joshua Tree desert.  Seeing the potential of the location, English suggested to the campground owner that he should start a music festival on the property.

Uninterested in doing it himself, the campground owner suggested to English that he found the festival.  “Ignorance is bliss, I suppose,” says English.  Within five months, the first Joshua Tree Music Festival happened.  Three years later, English added the fall version of the festival which takes place this year from October 10th through the 13th.

The May 16-19 festival features an impression cross-section of artists from Electronica and Delta Blues to soulful jazz, rock, funk, alternative and world music including My Baby, Diggin Dirt and Vintage Trouble as well as local artists like Gene Evaro, Jr., Myshkin Warbler, Megan Hutch and the Desert Rhythm Project.  All told, more than 30 performers take the stage from Thursday evening through Sunday.

English states that, “the Festival will never expand into multiple stages performing simultaneously,” as he “prefers that everyone get to share in the same experience.”

If you cannot make the May festival, the October festival is just around the corner.  For those wanting to beat the heat of the desert this summer, English mentions the Guitarfish Music Festival from July 25-28 on the Yuba River near Truckee, California.  Set in a forest one mile above sea level, the festival is a nice respite from summer’s heat.

For more information, visit www.joshuatreemusicfestival.com for tickets and more information.  To hear any of the performers, visit Spotify and type in Joshua Tree Music Festival.