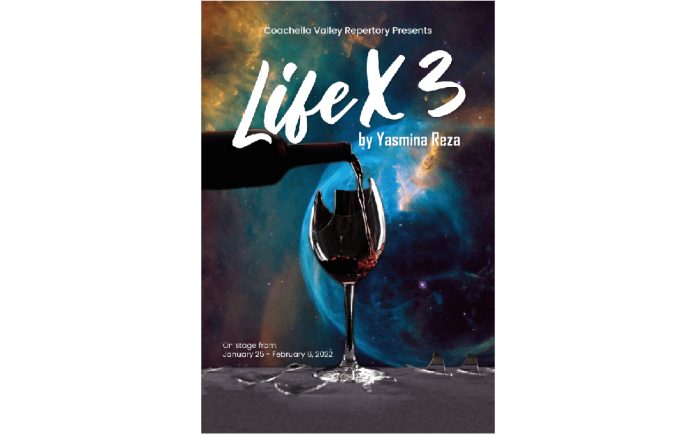 Trois versions de la vie (French for Three versions of life,) Life x3 is the fifth play by French playwright Yasmina Reza.  Reza’s work has been produced internationally, including Broadway, where she won Tony Awards for best play in 1998 (Art,) and 2009 (God of Carnage.) 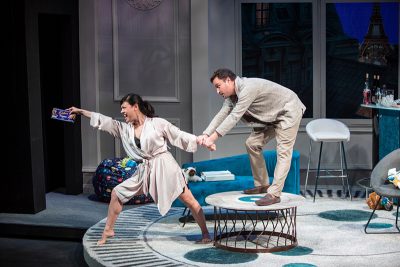 During an evening at home, former lawyer Sonia (Lynn Favin) and her astrophysicist husband Henry (Charles Pasternak) can’t get their annoyingly whiney, difficult, six-year-old to sleep. They argue over divergent parenting approaches, and just as they are at wits end, Hubert (Scott Golden) and Inez (Betsy Moore) show up unexpectedly for a dinner that Sonia and Henry believed was scheduled for the following night.

With no dinner prepared, just snacks to tame the appetites of their hungry guests and an extremely irritating child continuously crying and calling out from a room off stage, the four make efforts to carry on civilized conversations, but circumstances are not in their favor. Like a stink bomb going off in the middle of the living room, Hubert, throws into the conversation news of a scientific paper he’s learned about, that might create a conflict with a similar paper being researched and written by Henry, who hasn’t published in three years and is in desperate need of some success. The conversation spirals out of control and within moments, the four are throwing insults like water balloons. 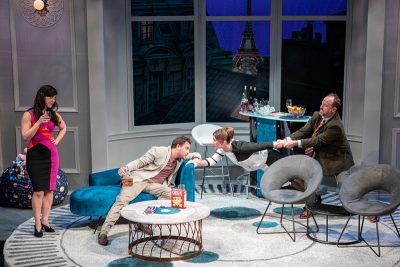 Life X3, is art imitating art.  It’s a professionally crafted script with witty banter and aspirations of sounding like an enlightened experience.  Discussions about the astrophysical flatness of halos does give hope of satisfying some intellectual curiosity, but it was fleeting.  LifeX3 does not really say anything about …. well… anything.  Yes, marriages can be ugly and messy, children can be a pain in the behind, and careers can be seriously challenging.  But three reruns of a catastrophic evening involving four people who do not seem to like each other, is like watching a train wreck from three different angles. There are no insights or pearls of wisdom.

But LifeX3 is a prime example of how the collaborative art of theatre can make a show incredibly interesting to watch, even if the script is not a favorite.  Lynn Favin, (Sonia,) Charles Pasternak, (Henry,) Scott Golden, (Hubert) and Betsy Moore, (Inez,) are exceptionally talented actors.  The four of them do a slow burn in their performances that is funny, mesmerizing and foretelling of the explosion that is about to happen. 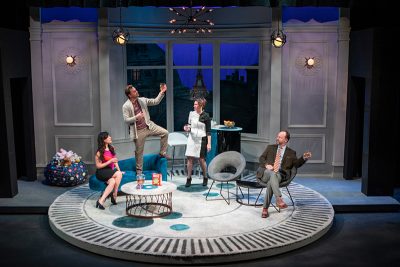 Most notably this production is an ode to Joann Gordon’s detailed and skillful direction.  A true lesson in the stunning ways a director cannot only enhance, but significantly contribute to the beauty and success of a show.  Within the confines of a single Paris apartment, Gordon’s vision makes each move intentional and demonstrative of not only the action, but of the inner workings of the characters.  Within a confined space, nothing was stagnant, each movement of blocking gave purpose to the dialogue and intent.  Fluid movements reflective of inner turmoil.

Moira Wilkie Whitaker’s lighting design is a show unto itself.  A breathtaking display through the window of Jimmy Cuomo’s simple, but elegant set design, is a light show that will take you to astrophysical planes. Cricket Myers sound design was ethereal, wrapping around the senses, as you enter the theatre.  The production team worked in perfect symphony to make this show top tier.

LifeX3 is on stage at CV Rep through February 6th.