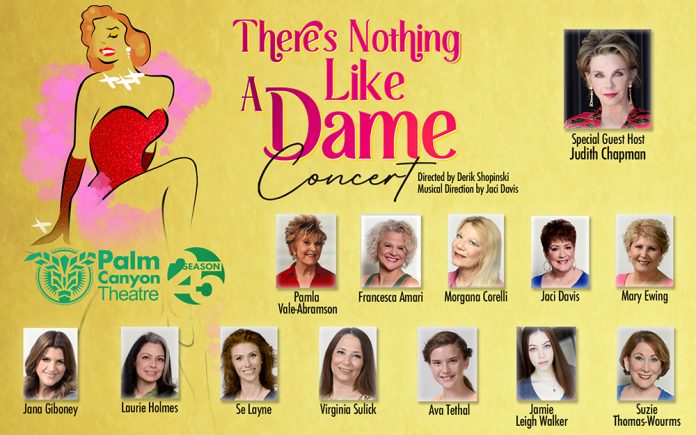 Rodgers and Hammerstein said it best in their 1949 hit musical, South Pacific, “There’s Nothing Like a Dame!”  And Palm Canyon Theatre, Coachella Valley’s Broadway in the desert theatre company, is taking that sentiment and producing a Broadway concert filled with classic songs and bursting with talent.

February 9th has been the date for many historical events, in 1870 the US Army established the US National Weather Service, in 1935 the US female Figure Skating championship was won by Maribel Vinson and in 1964 The Beatles made their first appearance on the Ed Sullivan show.

But on February 9, 2022, beginning at 7pm, in Palm Springs California, the Palm Canyon Theatre will present “There’s Nothing Like a Dame,” featuring a line-up of some of the most talented and mesmerizing women to ever grace a single stage.

Inspired by the divas who let it be known, there’s nothing like a dame, this concert is a celebration and tribute to the women and the classic songs that made Broadway music such an integral part of our culture and our hearts. Tears, laughter and music that will fill your evening with smiles and warm memories.

You don’t want to miss this incredible showcase of talent.  There’s Nothing Like a Dame Broadway Concert is a one-night-only event. February, 9 starting 7:00 p.m. All tickets are $30.​ For tickets, or more information, call the Palm Canyon Theatre Box Office at 760-323-5123 or order online: PalmCanyonTheatre.org.