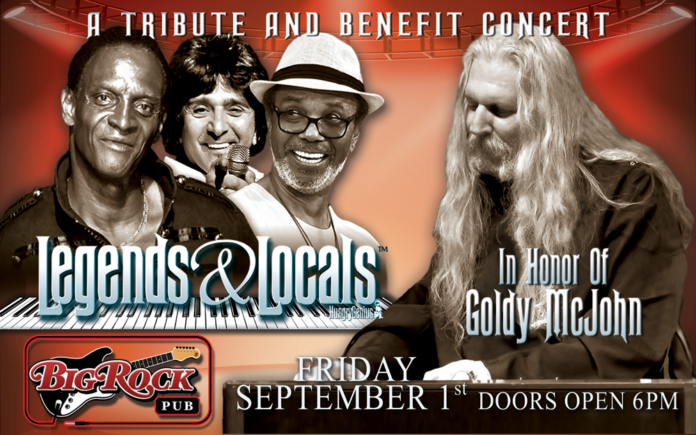 Jacob Stibbie began playing guitar at a really young age, as well as drums and bass. He wasn’t really interested in playing guitar until he heard Eddie Van Halen’s famous “Eruption.” At age 11, he started playing a wide variety of music with local bands, took several years of lessons, and was mentored by outstanding session musicians. Jacob, now 19, currently serves on the worship team at Active Church in Yucaipa, plays Lead Guitar for the Guns N Roses tribute, the Hollywood Roses, and was most recently called up as the Lead Guitarist for NBC’s America’s Got Talent. You will see him perform there on Tuesday’s at 8pm on NBC and with his band, STAY TUNED! September 16th at Big Rock Pub.

Thomas Stibbie describes his evolution as a rock vocalist: “Being the lead singer of the most good lookin’ band of all time (STAY TUNED!) is pretty cool! I do have to say, that I’m only here to provide eye candy for the ladies, and give David Lee Roth a run for his money!”

Thomas is Jacob Stibbie’s twin brother; 5 minutes younger than Jacob. He started singing at the age of 2, singing almost every song he heard for his family. While growing up, he wanted to play guitar, but he ended up not really enjoying the instrument. After he gave Jacob the guitar to play on, Thomas decided to work on singing and mainly entertaining people. By the time he was 7, he was giving every front man a run for their money, singing outside of his house and drawing all the girls to the driveway. When Thomas sang for a local talent show, he realized being on stage was where he belonged. At age 12, he started a band with his brother that would be “the most rockin’ band this world has ever seen.”

While his exceptional wit, positive attitude and mad vocal skills are the thing everyone notices most, Thomas has had to overcome some incredible challenges. “He actually has mental retardation and cerebral palsy with mild autism,” shared big brother Jacob. “His cerebral palsy causes his joints to develop improperly, and walks on his tip toes because of it. He also has hip issues.”

“Throughout his life, he was bullied and harassed badly throughout elementary and high school. Because he does a lot better socially than most kids with an intellectual or developmental disability, kids just thought he was strange and weird. He would come home from school crying every day, and he would be afraid to go back. But because Thomas is such a sweet person, he would never tell on the bullies, because he wouldn’t want them to get in trouble. As his twin brother, I tried protecting him as much as I could, but the times I was not able to be present would be his worst times. I always made sure he was with me as much as I could, and tried to include him in everything I did. I believe this helped him develop better social skills for a kid with disabilities.”

“Thomas struggled with his school work too. He was given modified school work, but Thomas wanted to take regular classes and be like a typical student. He never liked being in the special education classes, but him being in those classes is the reason he graduated. It takes him a lot longer to learn things than a typical person, and it would take hours for him to finish his school work. By the end of his high school career, through his involvement in dance and music, Thomas ended up turning bullies into friends and supporters, and would go from class to class speaking about bullying, and singing to them at the end. Thomas used music and dance to let people know he’s just like everyone else; he just has a different perspective on life.”

Dion C. Kahn, Vocalist: Originally from Columbus Ohio, Dion C. Kahn has been a resident of the desert since 2002. He was runner up in the Palm Springs Idol competition, and winner of the Palm Springs Voice at the Purple Room, not to mention a finalist in the 2016 Open Call at the McCallum Theatre. He has starred in several local stage productions with Palm Canyon Theater and College of the Desert such as RENT and The Full Monty, where he was nominated for a Desert Theatre League Award for Best Supporting Actor in a Comedy. Kahn has been the front man for the Gand Band for the past 3 years or so and has been wowing crowds at venues all over the desert including the fabulous Big Rock Pub. “I can’t remember not singing,” Kahn shared with CV Weekly. “But if it weren’t for karaoke, I probably would never have sung in front of anyone.”

Bri Cherry was born and raised in Orange County and began playing classical violin in the 4th grade through a public school music program. She moved to the Coachella Valley around 2010, and studies music at College of the Desert. She has joined many local musicians delighting audiences throughout the valley with her incredible musicianship combined with her enchanting stage presence. Her most recent project garnering valley wide applause is Bri Cherry & The Boys, an out-of-the-genre-box quintet could be described as a dub step violin, jazz, hip hop, musical kaleidoscope with a Tim Burton twist.

Courtney Chambers is a diverse artist who continues to push the boundaries and explore new musical territories. Her ability to seamlessly play across genres makes it hard to pigeon-hole this singer/songwriter. In 2001, she formed her indie record company Royal Daughter Records and went on to put out 5 records on her label. In addition to her original music she has worked with Jasmine Fields (Vocals and Guitar), Belinda Carlisle (Guitar), Heart 2 Heart (Nancy Wilson), Gabe Lopez (Backup up Vocals and Guitar) and is a former member of Dog N Butterfly (Nancy Wilson). Courtney Chambers currently performs all over Southern California as well as the Coachella Valley. Courtney Chambers’ is available on itunes, amazon and Spotify.

In 2017, she released the long awaited record she had been wanting to make for years, “ Courtney Chambers Live,” a stripped down, raw and honest performance featuring songs from every record she has previously released as well as unreleased material. Known for her powerful and soulful vocals, Chambers delivers raw and genuine emotion to every performance. For upcoming performances and all other info check out www.courtneychambers.net

Lisa Lynn Morgan, recipient of four Coachella Valley Music Awards, has been described as “a powerhouse and a staple in the Coachella Valley,” who has lent lead or backing vocals to well-respected local bands. She is also known to champion many others throughout the low and high desert music communities. “Every so often, you discover beauty hiding in the shadows,” shared AMFM Festival Founder, Rich Henrich. “You feel the power of a force not seen and experience a love not common. Their purpose in life seems to be a calling to give love and support to every voice that does not have the opportunity to echo and to bring inspiration at a time of desperation…They may not grace billboards, nor tower tall on the silver screen, but their presence is felt in the little things that add up to a community of great big things. Their energy is constant- striving towards a better end, towards a more just and creative world, not for fame or glory or recognition but for the humble aim of a belief in humanity and human potential. Some might call them ‘Earth Angels’ but I call her Lisa Lynn Morgan.”

Each of these local artists will have the opportunity to share the stage with exceptional music heavyweights in what hopes to be the first of many, Legends and Locals concerts. “It’s all about giving and sharing,” shared Terry Ilous, lead singer for Great White and front man for this Legends and Locals concert. “Everybody deserves a chance. It’s so hard to make it in this business. Everyone tells you no.”

For more information on the show go to www.thebigrockpub.com or search Eventbrite for the Goldy McJohn Legends and Locals Tribute and Benefit Concert, September 1st.