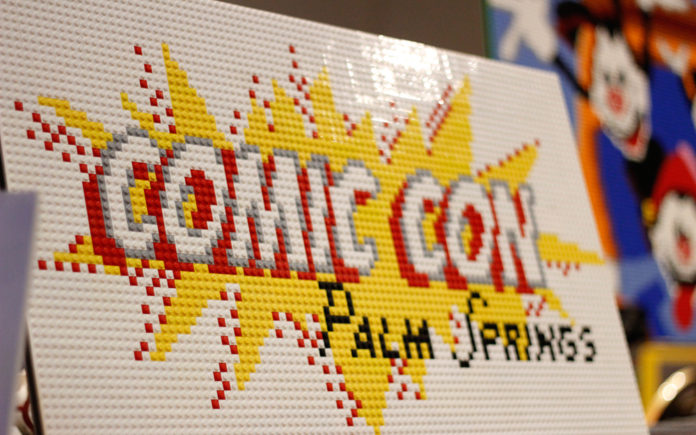 The second annual Comic Con Palm Springs occurred last weekend and was a success, with thousands of attendees filling the convention floor and accompanying attractions. The sprawling event occupied the convention center, event rooms at the Renaissance Hotel, and even had off-site events at the Hard Rock Hotel, Spa Resort Casino, and the Regency 9 movie theater. Attendees and celebrities alike seemed to enjoy the event, with Chester Rushing of Netflix’s Stranger Things attending the Saturday night after party at the Hard Rock Hotel and Lindsay Wagner, who starred in the 1976-1978 television series The Bionic Woman, saying “It’s not just vendors and people signing. They have so many… things going on… the show is very… fleshed-out… it’s being run like a really big show.”

The convention floor was totally filled with everything you would expect to find at a successful comic con. Vendors were selling merchandise, offering original sketches, airbrushing people and doing makeup, and people waiting in lines to get autographs and take photos with celebrities. There were also more unique booths such as one that was offering a virtual reality experience, which was constantly occupied. The event closed with a costume contest where participants got to go on stage and talk about the characters they were portraying and the process they used to craft their costumes.

Some of the biggest draws included displays such as Sean Rich’s Weapons of Pirates of the Caribbean and the Stan Lee Museum. Sean Rich brought a collection that completely filled a room with antique weapons, many of which appeared in the film. There were also antique coins and necklaces. Many of the items included prices as he is willing to sell items in addition to renting his collection for use in movies and appearing at conventions. The Stan Lee Museum was a huge display of artifacts from Lee’s career, such as original sketches and figures. There were also a lot of things that fans would recognize from the movies, such as Thor’s helmet; Captain America’s shield; and a row of life size figures that included the Iron Man suits in the order they were developed.

Other fun and unique attractions were the Zombie Café, which had zombie themed foods as well as zombies wandering around the tables; a surprise concert by voice actor Troy Baker at the Hard Rock Hotel after party; the Symphony Pop Orchestra, which played many familiar pop culture songs to a huge crowd; and the Arcade Expo room, which had a sampling of the classic video games that appears at the Arcade Expo event in Banning.

On Friday, after hours and off-site events included the zombie walk, in which participants walked from the Jackie Houston Plaza dressed as zombies to the Hard Rock Hotel for an after party. This event was organized by Arizona Corpse Crew, which also had a booth offering zombie makeup. There was also a musical performance by Tom Kenny (voice of Sponge Bob) and the Hi-Seas at the Spa Resort Casino and a late night zombie movie at the Hard Rock Hotel. In addition, there was a screening of two films at the Regency 9 Theater, Cosplay Dreams 3D Documentary and Late Shift. Late shift was particularly interesting because it is the first ever interactive film. During the screening, the audience was instructed to download the CtrlMovie app and connect to the provided Wi-Fi. Once the film started, viewers were able to decide for the protagonist what his next move would be. Choices like whether to investigate a strange sound or to flirt with a girl or whether to leave someone behind or help them defines how the character progresses and how the story ends. This particular film had seven endings. During a Q&A session after the film, the film makers noted that CtrlMovie would like to return to Comic Con Palm Springs next year.

Original Wonder Woman, Lynda Carter’s concert on Saturday, which was a separate ticketed event, was also a success. Carter delivered a 90 minute set of cover songs and originals, with her beautiful daughter Jessica Altman, accompanying her on two songs. Fans that purchased premium passes also got to have a photo taken with Carter and get an autograph.

Although Stan Lee’s panel was cancelled, with Comic Con Palm Springs releasing a statement on their Facebook page saying, “Due to personal reasons the Marvel Legend himself, Stan Lee will not be able to attend the convention floor today, CCPS wishes him well and we know the CCPS fan base does as well. Don’t miss out on your chance to see the Stan Lee museum with hundreds of items from his illustrious career,” the event was a success and will occur again next year.

From the Publisher Tracy Dietlin: As a young girl growing up in the 70s, I had 2 female heroes: Wonder Woman and the Bionic Woman. So for me, having the opportunity to do an hour interview with Lynda Carter before the event and see Lindsey Wagner in person were definitely the biggest Comic Con highlights for me. These were two huge iconic women for us to have at the second annual Comic Con Palm Springs. Thank you Christopher Spellman and team for making this happen.

Other special moments for me were attending the concert at Spa Resort and Casino on Friday night watching Tom Kenny’s band, The High-Seas perform. Yes… he is the voice of Sponge Bob Square Pants, but he is also an awesome singer and put on a fantastic show. Hanging out with him the following night at Hard Rock Hotel was an added bonus. Also on Saturday night, at Hard Rock Hotel, I had the pleasure of being introduced to Troy Baker, the voice of several characters in Batman Video games and many other video game voices, who performed with his band during the Global Sessions event. This man’s voice and songwriting won me over from his first song. I am now a dedicated fan. That was followed by a great set by The Brosquitos and then BB’s famous after party. Nobody throws a party like BB!

But I think for me, the most riveting part of this year’s Comic Con Palm Springs was the Stan Lee Museum, which was off the hook; so much memorabilia and such a body of work from this man. The impressive statues of Captain America, Ant-Man, the Winter Soldier, Black Panther, Dr. Strange, 3 versions of War Machine and 9 versions of Iron Man from the beginning. I was truly overwhelmed by it all.

Comic Con Palm Springs founder Chris Spellman had this to say: “I am looking forward to the future with all the excitement continuing to build from this year’s event.”

I agree with Spellman. I can’t wait to see what he has in store for next year.