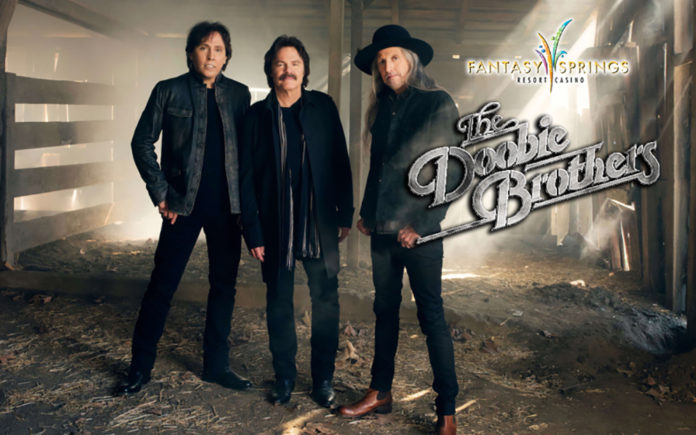 The Doobie Brothers are coming upon fifty years of making music and touring. Throughout that time, their popularity hasn’t waned with the American public. What is it that makes them so successful after five decades? The Doobie Brothers have a sound that’s contagious, if hard to define. This classic rock band has soul, country, gospel, folk, and R&B running through its veins. Their songs have universal appeal – connecting them to audiences both young and old, and fans of all varieties. Local fans can hear them play this Friday, at Fantasy Springs Resort Casino.

The band formed in 1969 in San Jose, California and is widely believed to be divided into three eras, the first from 1969 – 1975 featuring lead vocalist Tim Johnston. When Johnston had to leave the band due to a bleeding ulcer, Michael McDonald stepped into the lead vocalist role. The Michael McDonald years had a totally different flavor than when Johnston was their lead crooner. No matter, their hits still resonated with their audience and their fans clamored for more. The band took a five-year hiatus in 1982, reforming in 1987 with Johnston back in his old role. They’ve continued touring and selling out venues consistently since 1993. Over the course of the Doobie Brothers’ long tenure, their sound has gone through several evolutions, as their band personnel has gone through several incarnations. During their initial success with Johnston singing, they had the makings of a southern rock band – a little bit country and a little bit rock n’ roll. They were hard to define, but could be described as a feel-good, boogie biker band. When Michael McDonald came on board, their sound changed with his soul and R&B feel influencing their songs. With his voice defining their band during the seven years he was a member, their music felt miles away from where it began. This shift in gears is where mere mortals lose their fan base. The Doobie Brothers’ only grew. When McDonald left for a solo career and the band, exhausted from touring for twelve years took a break that lasted five years, reunited for concerts that sold out in Beatles-like proportions. Patrick Simmons, one of the founding members, is the only one who has been with the Doobie Brothers through all its iterations.

The Doobies have toured or performed with many other equally iconic bands: Chicago, Journey, the Eagles, Steely Dan, Steve Miller Band, Fleetwood Mac, and Earth, Wind and Fire, to name a few. They jammed onstage with String Cheese Incident at a music festival in Virginia. In 2014, they released their 14th studio album, Southbound, a celebration of all their greatest hits in collaboration with many country music stars (Toby Keith, Love and Theft, Jerrod Niemann, Brad Paisley, Blake Shelton, Chris Young, and the Zac Brown Band among them) providing lead and backup vocals. The Doobie Brothers stay relevant and their music continues to resonate with a wide audience. The reasons for their staying power are evident in all they do. Their soulful but rockin’ music transcends the confines of genre. Their simple but relatable lyrics are spoken from the heart and emotionally connect with listeners. The unity in their vocal harmonies make each song half rock ‘n roll and half spiritual experience. There have been rumblings on social media outlets that a new studio album is in the works. According to the band, four songs have already been cut, and the album is planned for release in the spring of 2018.

You don’t have to wait until then to hear them, though. You can see them live this Friday, August 18, at Fantasy Springs Casino. 84-245 Indio Springs Pkwy. Indio, CA 92203. To purchase tickets: http://www.fantasyspringsresort.com/prod/entertain/entertain.php#doobies