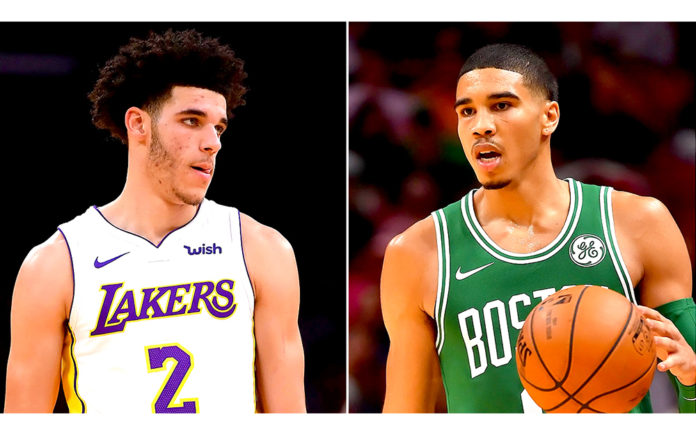 The pressure on Lonzo Ball ahead of his first season with the Lakers is huge, and the 19-year-old only has his father to thank for that.

Long before his son was drafted by L.A., LaVar Ball was in the habit of creating hype around Lonzo. He has claimed his son is better than Steph Curry of the Warriors, while picking arguments with NBA standouts past and present, like Shaquille O’Neal and LeBron James.

The very public comments didn’t escape the attention of the other Lakers. In fact, they began to build an image and create expectations, veteran Andrew Bogut says, of what Ball would be like. They turned out to be false.

All the hype with what his dad has done with the brand means people want to knock him down. That reflects on Lonzo as well, but he is the complete opposite to what I thought.

Lonzo is softly spoken, has a good sense of humor and doesn’t say a lot. Nobody has had any issues with him.

People’s true colors come out as the season goes on, but I don’t think he is like anything that has been reported.

But none of that will stop LaVar Ball from doing interviews, or promoting Lonzo and his two other sons, or picking fights.

“The next thing for Lonzo is to become the best player in the world. He ain’t got nothing but time,” LaVar said.

“Then my other two boys are going to chase him and be better than him. I hope all my boys end up on the Lakers. I guarantee they will win a lot of championships.”

He continued: “They are bold words, but they are my bold words. I have my own opinion on things. I don’t need anybody to tell me what to think. I know what I put in with my boys, that’s why I said he was better than him. Whatever I think, I genuinely think.”

There were a variety of reasons for this. Pre-draft, Ball seemed very focused on ending up with the Los Angeles Lakers and reportedly declined to work out for the Celtics. Danny Ainge also reportedly coveted Jayson Tatum above all other prospects from the start, and then-Celtics-star Isaiah Thomas seemed to be pushing for Markelle Fultz in the point-guard class.

But Ball also didn’t make a lot of sense for the Celtics from a personnel perspective. The Celtics prefer lengthy wings who can develop into talented two-way players, especially with so many good point guards available in today’s NBA.

That logic turned out to be good — Boston drafted Tatum, Kyrie Irving requested a trade, the Celtics ponied up big value, and both rookie and star point guard are now thriving. The Lakers took Lonzo — and all the Lavar Ball drama that comes with him — as well as forward Kyle Kuzma with the 27th pick. Pitting their touted rookie classes against one another. The game is a chance for fans of both rival franchises to bicker loudly on Twitter about who came out ahead in the 2017 NBA Draft, so here are a few thoughts one day before.

Tatum is starting for the Celtics and has contributed to winning basketball, while Kuzma and Ball have had the ultimate green light both as shooters and (in Ball’s case) as the primary show-runner. The players are different and the roles are different, so once again: Take all stats with an entire salt shaker.

That said … Jayson Tatum has fit the Celtics perfectly, while Lonzo Ball has struggled.

If you’ve been paying any attention whatsoever to the Celtics, you are aware Tatum has been good.

How good? Try 52.9 percent from 3-point range, and 54.8 percent during non-garbage-time minutes, a total which places him in the 96th percentile among NBA wings. He’s been reliable from other distances as well — he’s making 43 percent off his long two-pointers, which places him in the 70th percentile among wings. Long twos aren’t a staple of the Celtics offense, but they add depth to Tatum’s game. He hasn’t been particularly good around the rim, finishing just 52 percent of his shots (19th percentile among wings), but he has shown potential utilizing his length and touch.