There are those “once in a lifetime” moments that, with a little luck and presence of mind, can be captured forever through photography. There are a few, very gifted people with the consummate, instinctual eye and vision, who do so with poignant intensity. Scott Christopher is one such artist. Having earned the trust and respect of a very exclusive community, he was chosen as Michael Jackson’s personal photographer. Along with other rare photographs, Christopher will be unveiling one of the most important historical moments ever to be captured on film. At the Coachella Valley AMFM Festival, June 13-16th, a very personal and candid, never before exhibited, color photograph of the late, great Michael Jackson will be unveiled by this acclaimed photographer. With much gratitude, I am pleased and honored to be able to share a sneak peek of that photo titled, “Michael Jackson and Louis Armstrong ~ Play it again King”. This will be the first time this rare photo will be made available to the public in a limited edition offering.

Christopher describes that moment in time where he found himself positioned to immortalize the image of the iconic King of Pop. “It’s a very important and historic photograph. My moments with Michael were of course, very special. It meant so much just to be chosen as his photographer. I believe this is one of, if not THE, most soulful, intimate and compelling photographs of Michael in existence. We were two artistic masters in a small room. The bases were loaded, and the count was full. And I was lucky enough to pop a grand slam. It was magical, but it did not happen by chance. There was this beautiful black and white poster of Louis Armstrong, perfectly positioned behind Michael’s shoulder on the wall. I knew that there would be no room for error. It was still film back then, and I knew I was only going to get one frame to capture history. I positioned myself against a wall. Michael had tapped into his passion, totally consumed in this musical world of his, and he had forgotten I was in the room. It was in a children’s museum so the furniture around him was small, to a child’s scale. Several thoughts were going on in my head as to how to bring all these elements together without interrupting the state he was in musically. It took me 30 seconds to carefully inch over to the other side of the wall so I could create the perfect composition. I was waiting until the moment when Michael’s movement matched that of the poster behind him. I got in position and was fortunate enough to create the image just as Michael was at the top of his element. Michael was a very beautiful person. I just hope that this reflection of Michael’s internal genius goes out into the world, and people can feel this incredible moment, as deeply as I did.” 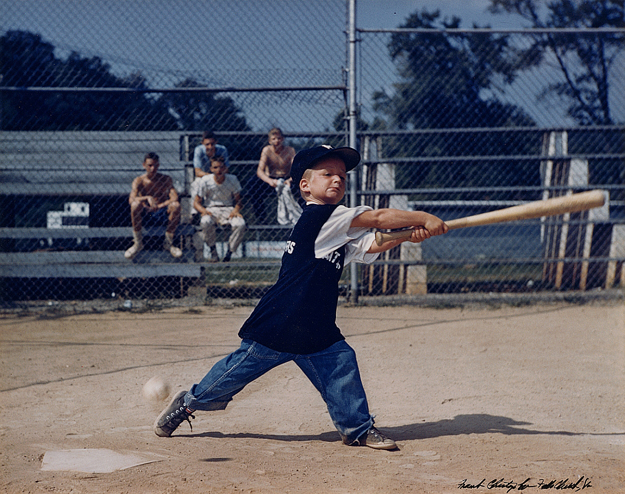 It would seem that Scott Christopher’s entire life prior to this had prepared him for this “once in a lifetime” moment. Amazingly, he has had several of them. His development began as early as the age of three, when his father, Frank Christopher, had him participate in internationally acclaimed, award winning photos that ultimately were credited for initiating the cultural thaw between the US and the former USSR. “My father and I created an image that became one of his major exhibition pieces in 1959, titled ‘Strike Three’. The photograph was included in the historic American exhibition that opened in Moscow in 1961. I have been immersed in photography for over 55 years.” Christopher, ironically went on to set records as a professional baseball player in baseball, winning championships and playing ball alongside fellow teammate and future Hall of Famer, Cal Ripken, Jr. “I had a beautiful moment against the Lakeland Tigers, of the Detroit Tigers organization. It was the 9th inning and I was up to bat, batting for the Florida State League Championship ring. I hit a home run way into the lights; it was a moment larger than the big screen. I was definitely used to pressure. For these types of shoots (referring to the shoot of Michael Jackson), you have to be so focused and so on, and I was. That’s what helps get an image like this, and why there are very few truly great photographs out there.” Christopher racked up some incredible record setting statistics during his athletic career, in spite of a major childhood injury that nearly caused the loss of his right, throwing hand.

Scott began painting seriously in 1975. “I’ve created 1000’s of paintings and pieces that are intuitive, abstract, figurative in human form, spiritual in symbolism. I put my mind on auto pilot and let the colors and forms show up and never question why. They are exercises in the excavation and exploration of the human spirit and mind. I feel as though it’s not just my feelings of ‘what it’s all about’ being reflected in my art. I feel I am representing humanity and the universe, not just myself.” Considering his vast exposure to so many incredible people and experiences, it is no wonder that his canvas art, sculptures, watercolors and drawings are full of color, texture, dimension and spiritual symbolism.

Elizabeth Christopher, Scott’s wife, is a highly accomplished and renowned painter, poet and photographic artist in her own right. She has her own unique style and technique and list of accomplishments that rivals that of her soul mate. Still, one cannot help but notice that while unique, when shown together, there is a certain unison reflected between the two artists. Perhaps this is best explained by the story of intuition and inspiration that brought the two together in the first place.

Scott’s first wife had tragically passed away unexpectedly, leaving him shortly after the birth of their third child. “I found myself alone with a newborn, a 1 year old and a 6 year old. The world presents some tough arrows along the way. In 1997, I was painting late into the night in Santa Fe. I had this vision that was very clear and very real. It appeared just on the edge of the painting I was working on. With that vision, came the message, ‘You sit in this chair and wait, and you will meet your soul-mate’. That chair happened to be in a kind of funky bar, where artists, cowboys, cowgirls and local people would gather. I have always listened to my visions when they have appeared, so I sat in that chair on and off for five years. I had just returned from Russia having completed an extremely comprehensive artistic project. I hadn’t been back long and hadn’t even decompressed from the trip. I was painting, and once again, the vision came through. I don’t even drink! I would just sit in that back corner sipping ice water. I put my brush down, went up to the bar and sat in that chair. I had eye contact with Elizabeth. An hour later we met by circumstance, and began reciting Pablo Neruda poetry. Eighteen hours later we were creating together. That was eleven years ago.”

In June, at the Coachella AMFM Festival, both Scott and Elizabeth Christopher will be displaying their art and other multimedia submissions. These pieces will include rare photos taken of Cal Ripken Jr.’s historic record breaking game, number 2131, Keith Richards on stage, and the Bolshoy Ballet performing Swan Lake in Moscow. The two also appear in and are associate producers of the independent film, Serpent in the Bottle that will be screened at the event. They are also screening a film in which they are executive producers titled, “Flowing Grasses: The Life of Artist Dean Howell. “We are really excited about the whole concept of the AMFM Festival.”

“Growing up, watching my father, I saw one person make a difference,” shares Scott. Now he and Elizabeth are continuing that mission together through the Christopher Foundation for the Arts. “We have various, large, international exchanges going on right now. We have donated over 20,000 boxes of crayons to institutions like the Boys and Girls Clubs, Indian reservations and many others over the past twenty months. A nice part of being human is doing whatever you can to contribute to the betterment of humanity. There’s no greater vehicle to do just that, than the arts.”

“Art never has a final heartbeat. It transcends time. Even though I created this picture of Michael Jackson 23 years ago, it becomes a part of your world today when you see it. The moment when art is created, it never stops breathing.”

More At These Links: 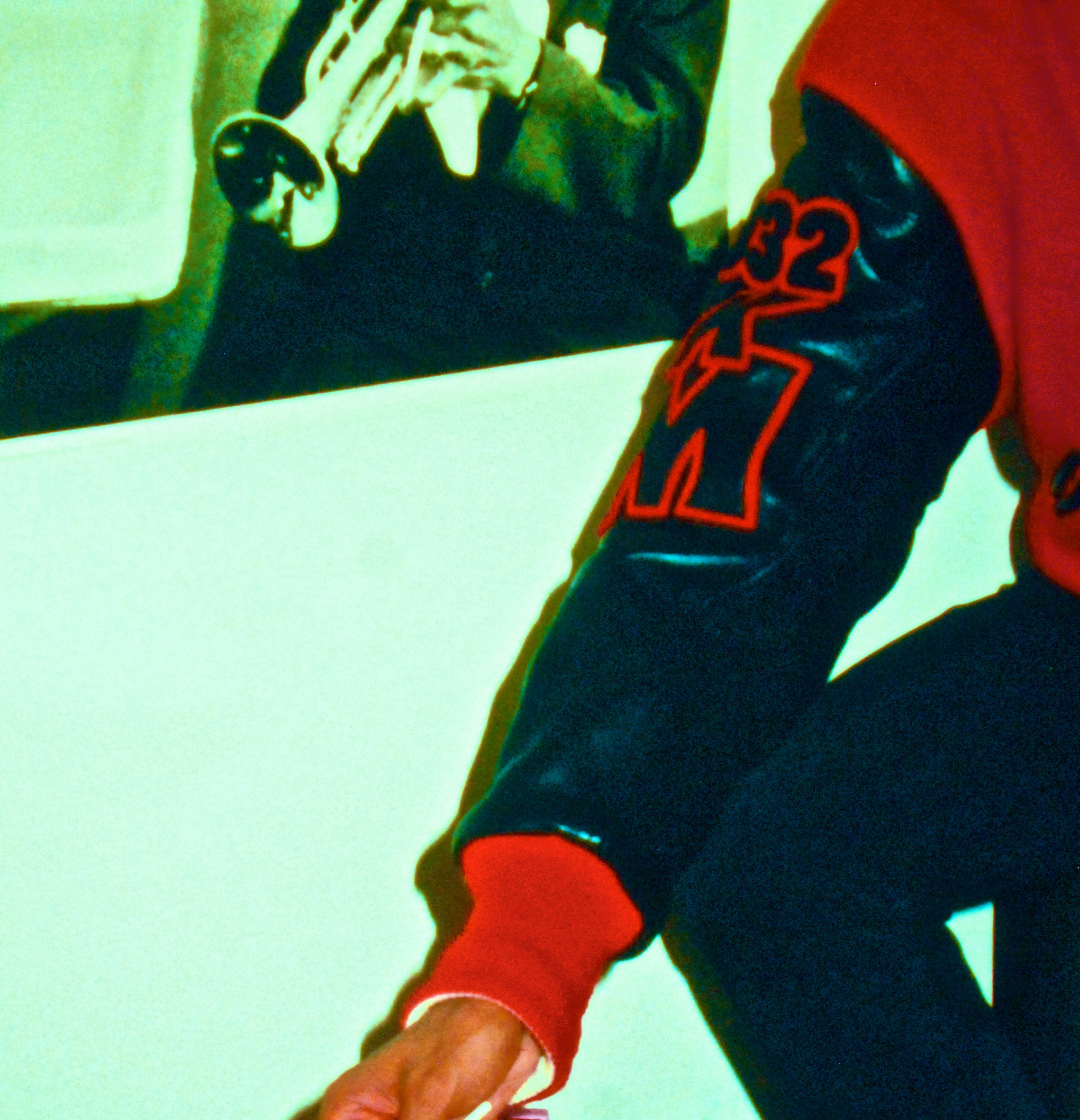 CV Weekly is honored to be given this EXCLUSIVE never before seen, sneak peek of this Michael Jackson photo taken by Scott Christopher that will be revealed in its entirety at the AMFM Fest.

CONTEST:  Can you guess what instrument Michael is playing in this photo? The first 5 people who can respond on CV Weekly’s FB page with the correct answer will receive the DVD box set of Season 7 of Dexter. Winners will be announced at the AMFM Fest.

Get your tickets now at www.amfmfest.com.