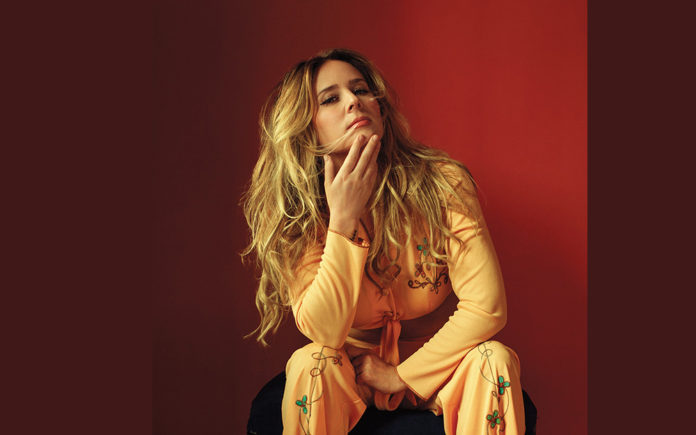 You can make every effort to categorize the music of Lucie Silvas but in doing so you will come to nothing. She is all of it: Americana, ’60s Motown, Vintage R&B, Brass-Backed Country-Rock, Retro-Country, Pop, Country and Alt.

British singer-songwriter Lucie Silvas will light the way like only she can for Lukas Nelson & Promise of the Real and Los Lobos at the Wedbush Garden Jam Music Festival at the Indian Wells Tennis Garden on Friday, April 5, 2019 at 6:30 p.m. on the main stage. You can see the full line-up and purchase tickets at gardenjammusicfestival.com. Coachella Valley Weekly spoke with Silvas by phone from her home in Nashville, Tennessee.

CVW: You’re no stranger to the Coachella Valley, having performed at Stagecoach in 2016.

Silvas: “It’s so absolutely beautiful there. It’s so stunning. I would like to come back to Stagecoach Festival!”

CVW: How are you preparing for your trip to the Coachella Valley for your Garden Jam appearance and subsequent tour?
Silvas: “I’m at home in Nashville. I’m rehearsing today getting ready for this tour. Kind of experimenting, there are wires everywhere in my studio with different things set up. Pretty sure I’m just gonna short circuit the whole thing. I’m not very technical. I’m plugging things into places and wondering why they’re not working. It’s complicated.”

Silvas: “I really really love Lukas Nelson. I know he’s been around for a while but I haven’t heard all of his music. More recently, I’ve been hearing a lot more of it. Obviously, he’s got a stunning voice and I really love this latest album that he put out. I’m just excited to see him live. I saw him play at the Grande Ole Opry not that long ago I was sitting there side stage watching and it was incredible just to hear him up there with his acoustic guitar. He’s got such a groovy and unique sound. He’s got that country twang and he’s got a lot of soul and the blues in everything that he does, that’s just my favorite thing in the world.”

CVW: What should music fans expect from your performance at Garden Jam Music Festival?

Silvas: “Expect a lot of energy. Some real stripped down moments where I like to play some of the ballads I have. It’s quite a dynamic set and showcases the new album. And there are a few covers that we do that we really enjoy. It will be our first time there. It’s all band and it’s stripped back!”

Silvas: “I have tour dates throughout the year, but this next tour with Tom Odell, he’s a British artist, for a lot of dates, I’m doing something really cool, I’m going out by myself with just my keyboard, a set-up and a few little things. It’s something I’ve never done before. It’s a different kind of set and different sound. A lot of my songs I wrote this way. It shows people back to the basics of how I wrote them. It’s what I consider to be a challenging move because playing piano by yourself is very different from playing guitar. It’s a completely different instrument and dynamic. Going up there and all that and finding ways to present yourself solo and on piano is challenging but kind of exciting.”

CVW: You seem to be an artist who thrives on vulnerability. Your lyrics from the album E.G.O. on the song “Black Jeans” say it all for me, “Ain’t no consolation prize/I hate it when you size me up/Oh, it’s about time you see me with my cards face up.” Now you’ve stripped down to piano and vocals for the tour with Tom Odell.

Silvas: “Very much so. I’ve done it a million times but I’ve never done an entire set like that. Your’e right about that, there’s a vulnerability. I feel that when the band goes off stage and I’m left on my own there. But if you get your head out of it, the last thing you want to do on stage is think. You just want to open your mouth and sing. There’s a reason why you’re singing this song and you want to get back to that. Usually I get myself into that. Sometimes there’s things you can’t control, a crowd that’s tough or you’re thinking about crazy random shit in your head that you can’t get rid of. A lot of the time, the vulnerability is a good thing ‘cause it brings out that genuine side of what you’re doing, there’s nothing contrived about it. If you make mistakes, you make mistakes. To this day, I haven’t had one performance where I haven’t made mistakes. The main thing is the energy of what you’re doing.”

CVW: I think you’ll agree that mistakes are a common thing with live performance. I’ve spoken at length with both Jimmie Vaughan and Toby Lee about it. What is your perception on musical miscalculations?

Silvas: “With my band, it’s a lot of different genres. When you make subtle mistakes that’s when people are like, ooh, is that supposed to be happening or if you really do play through it, at least that means you probably went for it, you had your whole heart in it. When you have a little trepidation that’s when you make lots of mistakes. You have to go into it confidently thinking if I mess up, then I mess up. Also, I’ve worked with so many drummers in my time. The guy I’ve been working with recently is so incredible with tempo if anyone is gonna drag it, it’s me or I sometimes rush, he keeps me in check. Funny thing is, when you’re playing by yourself, you can have that freedom. You’re not going to be out of time with anyone, and you can certainly drag a song, that’s something I need to keep in check, because there are moments where you can take your time with a song and be like, ‘OK I just turned a four minute song into a nine minute song’. I kind of do that anyway. Start again or change parts or change songs. I’m not very good with set-lists. It’s not that I’m disorganized; I just don’t want to make a decision. We learn lots of songs together and we’re ready for anything really. Because I get bored if the sets the same all the time. I just want to do things off-the-cuff, they’re ready for that. With having to change basses or retune guitars, that’s the hard part for the band, it can be complicated and you can’t move through sets quickly.”

CVW: From my perspective, your music is cultured and earthly. There can be an overabundance of effort to categorize your music when all you need to do is listen. You’ve lived around the world and travelled it as a musician as well. Does the world shape your music?

Silvas: “My parents are also well-traveled. My dad is English and also grew up in New Zealand. My mom is Scottish. They met in Italy as they were travelling separately.

They’ve lived in Nairobi, Johannesburg, England, Scotland, and back in New Zealand with my two sisters. We’ve moved school a lot; we’ve moved houses a lot. By the time I was 25 I think we had moved 17 times, which was so nuts. Yet, we were just like that, as three girls, me and my sisters we were encouraged to be independent and do what we wanted to do, we all left home pretty soon, I was on the road as a backing singer by the time I was 17. My parents were great like that, very liberal and free-spirited people, moving around certainly opens your eyes to changes and what life could be and not get too narrow-minded in what life is supposed to be and be kind of open. There’s still so much of the world I want to see and want to experience. I think it naturally happens without even realizing. When I was growing up in New Zealand as a kid, I was listening to a lot of American and British music. Some of my favorite singer-songwriters or artists, David Bowie or Elton John or The Beatles and Dusty Springfield have definitely influenced me and I felt they do give you a different perspective. I never really wanted to do one thing or be a one-trick-pony and that kind of makes it harder.”