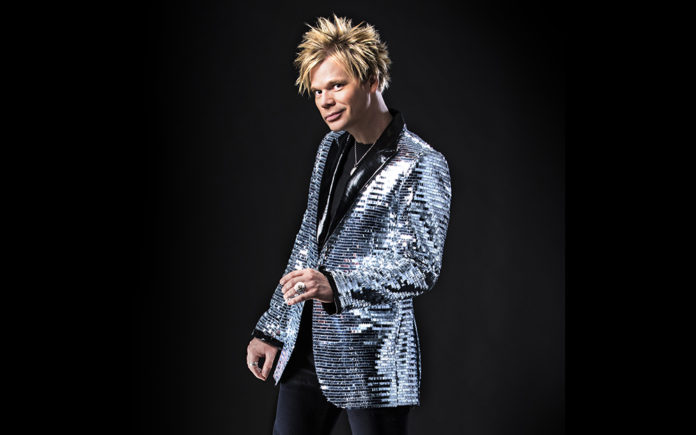 Jazz and Rhythm and Blues pianist Brian Culbertson will be performing at 6:30 p.m. on Saturday, April 6th, 2019 on the main stage at the Wedbush Garden Jam Music Festival preceding Jimmie Vaughn and Buddy Guy. Just another day in the life of multi-instrumentalist Culbertson. Now based in Chicago, Culbertson, and his signature fashion and hairstyles, are well known to Coachella Valley residents as he has performed here for years. Prior to his set at the Indian Wells Tennis Garden on Saturday, he’ll have performed six shows in five consecutive days on the East Coast. He’s flying in on Saturday morning from Philadelphia and is ready to bring his ‘Sunday best’. I spoke with Culbertson by phone from his home in The Windy City.

CVW: What has it been like for you in Chicago?

Culbertson: “It’s 56 degrees and sunny. I just had a nice walk through the neighborhood. I moved to Chicago about three years ago. I went to college there. I was in L.A. almost twenty years and now I’m back in my old stomping grounds. I kind of missed the vibe of the big city. It’s a lot different than LA. I go to a lot of shows much more than I did in L.A. because it’s so annoying to drive. Here, I don’t even have a car, it’s great, I walk everywhere.”

CVW: How are you feeling about the Wedbush Garden Jam Music Festival?

Culbertson: “I’m stoked. It’s an interesting mix of rock, blues and jazz. There doesn’t seem to be a lot of those types of festivals. Most fests are more narrow.”

CVW: Do you still come out to the West Coast often?

Culbertson: “I’m in SoCal every month or two. We’ve done a million shows out there. I’m in L.A. for rehearsals or recording, meetings, I still get my hair cut there. I’ve done shows in the Coachella Valley at least once a year. The McCallum Theatre in Palm Desert, a lot of different venues, it’s always fun. It’s a little nuts, but you do what you gotta do. I like the vibe and the feel out there. There’s a calming sense when you drive out to the desert. It’s a nice change of pace. I look forward to it. The fans are really cool.”

CVW: Your band is always the finest of the lot. Tell us about them.

Culbertson: “A lot of the guys in the band are fairly new, new sax player, guitar player and bass player. I have my core drummer Chris Miskel and keyboard player Eddie Miller that have been with me almost 20 years. There’s great new energy in the band. You’ll see on stage there’s choreography and it’s a very entertaining show. Up-tempo, funky. We are doing long jams and stuff.”

CVW: You’ve performed your music around the world and with so many artists like Michael McDonald, Chris Botti, Barry Manilow, Herb Alpert, Natalie Cole, Maurice White (EWF), Chuck Brown and Bootsy Collins. What should we expect from your set?

Culbertson: “We were just in Asia for two weeks, Japan, China, Korea, they were going bananas out there it was pretty awesome. I curtail the set lists differently in different countries. Last time I was in Korea, I’ve been known to throw in some old school R&B covers, Earth Wind & Fire, or something like it, that goes over really well in the states, as you can imagine, but over there, they were staring at me like they had no idea what the hell I was playing, I was like, alright, dually noted. Then I went into my instrumental songs and they go bananas. Most of the audience out there is around twenty years old. They’re like young music students, I found out they practice to my songs as college entrance exams, it’s so bizarre.”

CVW: You recently released a live concert video. Tell us about the issue.

Culbertson: “The studio album is called Colors of Love, we went out on tour and filmed the show in Vegas and we released that on Blu-Ray video a month ago and an accompanying double-CD. April 19th the digital version is being released on iTunes, Amazon Video, and other platforms.”

CVW: You are recognized for producing all of your music and have a significant history of producing other artists. How do you do it all?

Culbertson: “Some artists, with how they grew up, are just focused on playing their instruments. I was not as focused on playing piano; I was more focused, as a kid, on songwriting, arrangements and producing tracks. That was really my upbringing was more in that vein. Then I started making records. I really knew exactly what I wanted. It didn’t make sense for me to hire other producers because that’s how I got my start at 12 years old making tracks with a little drum machine. I just grew up that way. I used to produce for other artists but my touring and recording schedule is so heavy I simply don’t have time. Producing records is a large time commitment. Even one song can take a week when it all comes down to it. You’re recording, doing the arrangement, writing the song and then mixing. I’m barely trying to keep up with my own records.”