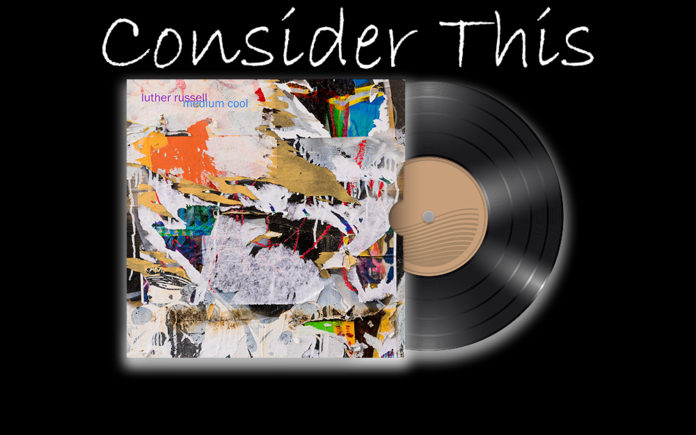 One of the continued delights that come with being a music lover is getting turned on to new music. It’s particularly sweet when the artist you discover has been around awhile, amassing an impressive body of work. For many, that was the case last year, when Luther Russell released a career overview entitled Selective Memories: An Anthology.

It turns out Luther has been creating stellar music for nearly 30 years, furthering a musical heritage that began with his Grandfather, Bob Russell. A well-known lyricist, he collaborated with everyone from Duke Ellington and Quincy Jones. He had huge hits like “Babalu” and “Don’t Get Around Much Anymore” to “He Ain’t Heavy, He’s My Brother.” Bob’s wife, Hannah, wrote children’s songs and film music and her brother, Bud was also a legendary songwriter responsible for “Flat-Foot Floogie (With A Floy-Floy)” and “Sentimental Journey.”

Luther grew up in the Central Coast towns of Carmel and Big Sur. The Beatles were an early inspiration, followed by Stevie Wonder, Chicago and Van Morrison. He picked up piano pretty quickly and gained a reputation as an accomplished drummer before hitting puberty. His early forays into songwriting were captured on a Tascam recorder. Ollie, the older brother of his friend Rein, encouraged his ambitions by giving him a cheap guitar and teaching him the basics.

Ollie’s easy-going mentorship allowed Luther to hang with the older, in-crowd, providing a safe haven for his musical ambitions. But tragedy struck when Ollie was hit by a truck while driving his motorbike. He hung on for 12 days and then he died at age 19. Crushed, Luther left town and moved to Los Angeles to stay with family.

Although he was just 17, he quickly made some important musical connections, meeting Tobi Miller and his pal Jakob. Along with Aaron Brooks, they formed the Bootheels. The moniker is a not-so cryptic tribute to the song “Mr. Tambourine Man,” famously written and recorded by Jakob’s dad. Although the collaboration was short-lived, it provided entrée to the Los Angeles music scene.

Soon, he began playing with bassist Jason Hiller. With the addition of Dave Sobel, Chris Joyner and Craig Aaronson they became the Freewheelers. Their Roots Rock sound incorporated elements of Country and Soul. In 1991, their debut was released through DGC records. A few years later they switched to Rick Rubin’s Def American label for their second album, Waiting For George, which arrived in 1996. Even though their music was in the same wheelhouse as Americana torch-bearers like Wilco, Son Volt and The Jayhawks, and despite an ardent fan base, they couldn’t gain a foothold in the music industry. The band tried relocating to Portland before they amicably parted ways.

A prolific songwriter, Luther had written more than enough for an album. His solo debut, Lowdown World (And Other Assorted Songs), arrived in 1997. He was also gaining a reputation as a sympathetic producer. For the last 20 years he has struck a balance, pivoting between production work for artists like Fernando, Richmond Fontaine, Sarabeth Tucek, Noah & The Whale and Miranda Lee Richards, and recording his own music.

His all-instrumental effort, Down At Kit’s appeared in 1999. Two years later, he recorded the pastoral Folk of Spare Change. Six years elapsed before the arrival of the bare bones Repair and 2011 saw the release of his epic Invisible Audience album.

During this era, he also briefly paired with ex-Black Crowes guitarist Marc Ford as Federale. They signed a record deal and were dropped before any music was released, (ah, the fickle record industry). Somehow, he has also found time to moonlight as a guitarist for Robyn Hitchcock’s band, the L.A. Squires, and formed Those Pretty Wrongs with legendary Big Star drummer, Jody Stephens. Their self-titled debut, released in 2016, received rave reviews.

Last year, Hanky Panky Records assembled Selective Memories: An Anthology, a career-spanning two CD set that covered his entire oeuvre, It featured choice Bootheels, Freewheelers and Federale cuts along with songs from his solo albums and a plethora of unreleased gems. (Burger Records released a companion version as a two-cassette set, perhaps the vinyl Gods will finally put it on LP….). It served as an introduction for many to his herculean talent. Now he’s returned with his sixth solo effort, Medium Cool.

If the Alex Chilton and Paul Westerberg went over to T-Rex’s house to make a record, it might sound something like the full-tilt boogie of the opening track, “Deep Feelings.”  Glittery guitar shudders and quakes over feral bass lines, shimmery stylophone and a chunky back-beat. Luther is equal parts sanguine and sincere as he lays out the obvious; “I’ve got deep feelings for you, you’ve got deep feeling for me…yes, you do/Let’s move closer, come in tighter, be composer to my writer, Come On! Let’s make a song.” A veritable tsunami of guitars crash over the break, underscoring the song’s lubricious urgency.

Somehow, this album evokes an earlier, less complicated era of Rock N’ Roll, somewhere between the late ‘70s and late ‘80s. During that algorithm-free epoch, Bad Company, Blondie, Fleetwood Mac, Foreigner, the Cars and Disco, all co-existed in the same musical eco-system. Punk Rock was something of an outlier and the advent of Hair Metal was just around the corner. But we all experienced and absorbed the same music. To quote Charles Dickens, “It was the best of times, it was the worst of times.” Consequently, it was the age of wisdom and foolishness. (Seriously, Styx was popular).

The Power Pop crunch of “Can’t Be Sad” opens with jangly guitar, angular bass lines and an insistent tom-tom rhythm. Drums gather speed heading into the chorus as Luther unravels a mercurial relationship with a girl who’s “been uncouth just like a Rubik’s Cube,” but is also “the best damn puzzle that I ever had.” Still, he’s clearly ride-or-die, noting “Tho your little hammer pounds nails into my hands, it’s the best damn crucifixion I’ve ever had.” By the bridge, the instrumentation revs up, adding corrosive piano, shang-a-lang rhythm guitar and a sinewy lead guitar before collapsing into a sweaty, satisfying heap.

Splayed guitar chords are followed by elastic bass and a tumbling beat on “Have You Heard,” a coast-to-coast celebration of the power of Rock N’ Roll. Rapid-fire riff-age intersects with ringing, Byrdsy strumming and plinky piano, as Luther reminds us that Rock is “deep inside me and you…it’s deep inside your Soul,” PLUS, it can be found in Brooklyn-town, Frisco, Milwaukee, El Paso, New Orleans, Tulsa and L.A., so at least America has that going for it.

Perhaps John Fogerty coined the term “choogling,” 50 years ago, in anticipation of Luther’s song, “Sad Lady.” Waspish guitar riffs are bookended by whip-crack percussion and wiry bass lines. Over wah-wah licks, Luther tries to coax a morose matron out of an emotional funk; “Life ain’t nothin’ but an uphill climb so, let your heart break another time.” His patience evaporates rather quickly; “Sad Lady, who you foolin? This party’s fuckin’ rulin’ (so) quit glancing and start dancing, post-haste.”

The action slows for a few numbers. “At Your Feet,” is a sweet and sunny charmer that shares some musical DNA with the Byrds deep cut, “Ballad Of Easy Rider.” Acoustic riffs ring and ripple over murmuring bass and swelling strings. Luther wears his heart on his sleeve as he consoles the object of his affection. There’s a tremulous catch in his voice as he quietly confesses he is patiently waiting for her to get past her heartache and let him in; “An old song breaks through the radio waves, you stand frozen in time as it plays, meanwhile, I’m all drowned out as I lie at your feet.”

A little self-flagellation is the order of the day on “Talkin’ To Myself.” Sparkly guitar, a clip-clop beat and a tambourine shake can’t camouflage this mordant marital post-mortem. The blows couldn’t be softened through chemical consumption; “Sure, I got by, by staying drunk and getting high, I screwed around, I bottomed out drowning in my own self-doubt/Every face they saw right through, and they all looked just like you, I was unmoored in a strange town, cracking up while draining down.” The chiming guitar on the break shapeshifts from melancholy to majestic and the clouds part as Luther confides an epiphany of sorts; “Something’s lost, something’s gained, and some things are just maintained, like the scarred-over hole buried deep within my soul.”

Meanwhile, “Blue Balloon” mines the sad/happy angst that Brian Wilson perfected with the Beach Boys on “Pet Sounds.” Plangent guitars shimmer and sway under tender verses and then flange, phase and accelerate on the jaunty chorus; stacked harmonies kind of ache in all the right ways.

The album’s best tracks, “The Sound Of Rock & Roll” and “Corvette Summer” bump up against each other in the middle of the record. The former blends cascading acoustic and soaring electric guitar before drums and bass kick in on the chorus. Luther deftly sets the scene, with a few neatly-turned phrases.  He unspools a story of unrequited love, a chance encounter in a club, and is able to harness it to the restorative power of music. The instrumentation and arrangement ebb and flow, blissful one minute, mournful the next. “Now you’re drunk, and she’s high, and your heart wants to die/And the music plays so loud as you float above the crowd, you’ve been set free…” A spiraling guitar solo is tart, sugary and bittersweet.

The latter is a perfect summer anthem. 40 years ago, it would have sandwiched nicely between Foreigner’s “Hot Blooded” and Steely Dan’s “Josie” on any AM radio dial. Slashing power chords collide with rumbling bass lines and a bristling big beat. The candy-coated crunch is tempered by Luther’s raspy vocals. The lyrics pay sideways homage to the Mark Hammill cinematic muscle car opus, “Corvette Summer.” “He’ll be cruisin’ for a sweetheart down on Van Nuys Blvd. Gonna feel so alive now, with his right-hand drive now, when he rolls.” The souped-up guitar solo gets positively cyclonic and the rev’d up outro references a classic Cars track, “Bye Bye Love.”

The record closes tender acoustic ramble of “Can’t Turn Away.” The infectious melody belies the lyrics’ serious subject matter, sticking by a friend in need. Even though Luther admits he “doesn’t want to face the truth,” he can’t turn away. A somewhat sober end to a seriously wonderful album.

Much like the 1969 film that shares its name, Medium Cool is a dazzling fusion of fact and fiction, only Luther wraps His stories in indelible melodies, incandescent arrangements and crisp instrumentation. His sound hits that sweet spot between Big Star and the Replacements. With another Those Pretty Wrongs record scheduled for later this year, it looks like 2019 is shaping up to be the year of Luther Russell.