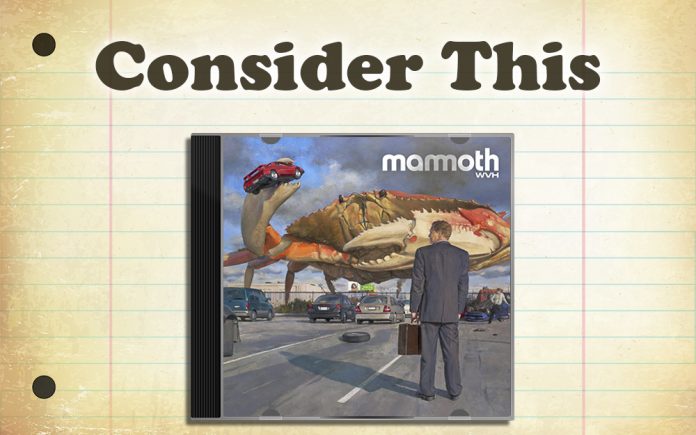 Anyone who came of age in Los Angeles in the mid ‘70s, remembers Mammoth. A band whose sound was as colossal as its name, it featured preternaturally talented brothers on guitar and drums, a showboat-y, dandified lead vocalist with a leonine mane of hair and a furry thicket of chest hair, plus a subdued bassist that held down the bottom and provided high harmonies with aplomb. Mammoth were the kings of the backyard party circuit in L.A., the scourge of neighbors and police forces between Pasadena and Santa Monica. Later they began plying their trade in music clubs along the Sunset Strip under a new moniker, the guitarist and drummer’s last name, Van Halen. Maybe you heard of ‘em.

These days, Mammoth WVH is the sole creation of Wolfgang Van Halen, the son of guitarist Eddie Van Halen. Born at the dawn of the Grunge era, Wolfie grew up in public. Not only was his dad the iconic guitarist who invented new ways to shred with his own band (and also popped up on game-changing songs from Michael Jackson and Thomas Dolby), his mom was beloved actress Valerie Bertinelli.

Wolfgang began banging on the drums at an early age. His dad bought him his own kit when he turned 10. Two years later, received his first guitar. By age 13, he was making guest appearances with his dad’s band, a couple years later he taught himself to play Van Halen’s epochal instrumental, “Eruption.”

Mastering bass at age 15, his dad announced that Wolfie would be joining the reconstituted Van Halen, which included original vocalist David Lee Roth. Not only did he tour with the band, but he also played on their final studio album, A Different Kind Of Truth. In between VH commitments, he joined the Hard Rock band Tremonti as their touring bassist. He ended up playing bass on two Tremonti albums and also appeared on Sevendust guitarist Clint Lowery’s solo efforts.

In 2000, Wolfie’s dad battled tongue cancer, and although he was declared cancer-free in 2002, by 2019 cancer had returned in his throat and finally his lungs. On October 6th , 2020, surrounded by his son, Valerie and his current wife, Janie, he died from a stroke at St. John’s hospital in Santa Monica. Throughout the years, Wolfgang had been working on his own solo material, luckily, Eddie had been able to listen to all the tracks that created this record. His last words to his son were “I love you.”

The album’s first four tracks blast out of the speakers at a furious clip. A flurry of cantilevered guitar riffs announces the arrival of “Mr. Ed,” and are quickly supplanted by roiling bass and a bludgeoning beat. Stacked harmonies crash over the angular arrangement as lyrics incite an opponent; “All the rules don’t mean they’re right, this is more than just a fair fight, come closer into the light, I want to see what you’ve got now, where’s your bite?” Wolfgang confidently rips a face-melting solo that leaves no questions as to his lineage. The song’s closing notes land somewhere between classic EVH shred and the kind of complex chord clusters found on early Boston records.

“Horribly Right” leaps in, all monster riff-age, thunderous bass and piledriving beat, landing with a Mesozoic stomp. But Wolfgang rather quickly flips the script, locking into a sunshiny, Power Pop groove on the verses, while packing a powerful punch on the chorus. It echoes the Quiet/Loud dynamic pioneered by The Pixies and Nirvana. Doomsday lyrics indicate an emotional apocalypse is at hand; “Stumbling and you’re not shooting straight, subtlety is not your finest trait, can’t you see how much there is at stake? It’s just another one of your mistakes.” On the break guitars see-saw, stutter and growl before the song shudders to a stop.

“Epiphany” weds marauding guitars and search-and-destroy bass to a tick-tock beat. Spiky lead guitar licks dart through the mix, bookended by chunky rhythm riffs, a wash of keys and Wolfgang’s Beatlesque harmonies. Willowy piano notes underscore the bridge, as caustic lyrics taunt a traitorous friend; “And I’ll be there when you fall down, down, down, we’ll all be there to watch you crawl, and I was there when there was no one else, but where were you when it all went to hell?”

This informal song-suite concludes with “Don’t Back Down.” Wiggly licks connect with wily bass lines and a thudding anvil beat, before kicking over into an infectious, Glam-tastic crunch. The rhythm ratchets up to a tribal tattoo as guitars navigate a series of aural switchbacks. Lyrics offer a thinly veiled commentary on the divisive times we live in; “Breathe it in, all the madness around you, feelin’ like it’s the end of days, thrown aside, now you know that they want to, yeah, they don’t know to be better anyway/Yeah, everybody’s goin’ crazy, yeah, it won’t be long until we’re dead and gone.” Tinkling hi-hat action announces the chorus, as vocals burrow slightly beneath the instrumentation. The record catches it’s collective break on a couple of tracks, “Circles” and “Resolve.” The former is powered by shimmery acoustic riffs, shuddery electric notes, rattle-trap bass, gossamer keys and a kick-drum beat. This mid-tempo groover nearly camouflage lyrics wracked with recriminations self-doubt; “Lost in my head, a plague of regret, we’ve gone in circles wondering lost in my head/It’s almost over, was there anymore I could do, did I go too far? we’re to the start.” Chiming guitars soar above the arrangement airy and celestial, leavening the heartache.

The latter jangles to life as splayed acoustic notes crest over slippery electric riffs, sinewy bass lines and a rat-a-tat rhythm. Wolfgang’s pliant tenor is thick with betrayal as he delivers a brutal relationship post-mortem; “You’re what’s wrong, there’s something wrong in the way you loved me, and I don’t even know anymore, all along there’s something in the way you broke me, you won’t ever know the resolve, you won’t ever know the resolve.” Unleashing a filigreed guitar solo on the break, his every move is shadowed by a thunky backbeat. The melancholy melodicism of both songs recalls collaboration between late Grunge-God Chris Cornell and his longtime compadre, Alain Johannes.

Front-to-back, this album is simply crackles with authority, but a couple of tracks stand out. “Think It Over” employs twitchy electric guitars, boinging bass and a pogoing beat that would sandwich nicely between The Vapors’ “Turning Japanese” and David Bowie’s “China Girl.” The buoyant melody and arrangement are mirrored by this caustic carpe diem; “Wait, why can’t I move on? Hey, why’d you take so long to think it over? Cold regret, remembering the words you said, hold your breath and slip away, away/Just wake up, not everything will be this tough, don’t think it’s ever not enough, if it meant anything to you.” Sugar rush guitars shang-a-lang on the bridge only to be overtaken by slashing riffs on the break.

“Feel” is the album’s magnum opus. Strafing guitars (including his dad’s infamous Frankenstrat), collide with jittery bass lines and a blitzkrieg beat. Long story short, brittle lyrics like you feel something, I feel nothing” cut to the quick. Jackhammer guitars hug the melody’s hairpin turns before arrangement builds to a crescendo on the break. As bass lines buzz, and Wolfgang unspools a stinging, staccato guitar solo, it’s quickly eclipsed by a walloping fusillade of drums. All the elements coalesce, riding roughshod over the vocals until it stops on a dime.

The balance of the album deftly hopscotches through a plethora of styles. From the cyclonic sweet-sludge of the title track, to the scuzzy crunge of “The Big Picture,” and the molten allure of “You’re To Blame.” The album was meant to close with the phased and dusted bluster of “Stone,” an epic track where Prog Rock meets primordial ooze and positively wallows in the mire. A perfect ending point, it’s ambitious and expansive in all the right ways. Except on social media, fans were clamoring for “Distance.”

Originally uploaded to the interwebs a few weeks after his father’s tragic passing, it was written during the darkest days of Eddie’s battle with cancer. Poignant lyrics are matched by an irresistible melody, powered by cascading guitar riffs and a shuffle rhythm. Addressing his dad directly he confides his fears and doubts, but remains confident their bond will never break; “I’m so happy, you’ve found a place that’s better for you than this rock we’re living on, I’m so nervous, don’t know my place, a life without you, I’m not ready to move on/No matter what the distance is I will be with you, no matter what the distance is, you’ll be okay.” Emotionally naked and vulnerable, grief-stricken, he unleashes a keening solo, holding the notes that mirror his pain in a way that’s both cathartic and cleansing. Along with Rival Sons’ “Jordan,” this track perfectly distills the ache of losing someone tempered by the understanding that they’re free now.

Every note, every guitar lick, bass line, drum fill and wash of keys was played by Wolfgang who also wrote all the music and lyrics himself. The record was produced by Michael “Elvis” Baskette (best known for his work behind the boards with Tremonti, Myles Kennedy, Sevendust and Slash).

By turns angsty and aggressive, tender and surprisingly sweet, Mammoth WVH is suffused with the spirit of Eddie Van Halen. Wolfgang never apes or mimics his father’s self-described “Brown Sound” he doesn’t need to. He’s carved out his own Herculean style. Somewhere EVH is smiling.