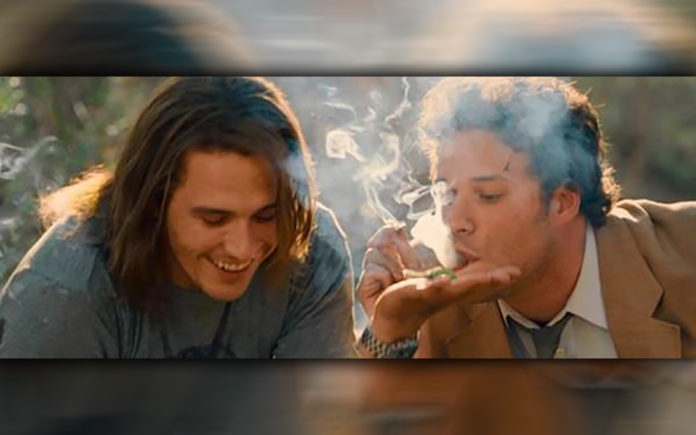 There are two kinds of weed movies. Those that are better experienced when high and those that are about the comic misadventures of being high. Of the latter, there are numerous titles, most made since the 1970s. The majority are dumb teen movies that don’t really hold up very well except for the nostalgia factor – that is, assuming the viewer’s memory is fully functional.

Of the latter category, the first title most people think of is Cheech and Chong’s classic first movie, now considered a masterpiece and prototype of all stoner movies that followed. 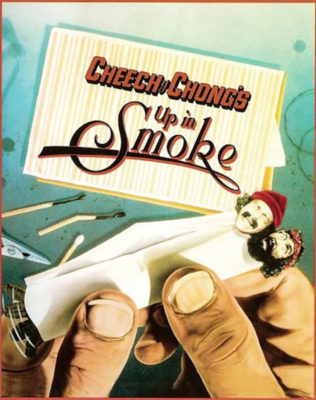 Director Lou Adler delivered on the promise of following two misfit tokers as they go about their daily routine that sometimes involved cops and dog turds.

This movie can still trigger big laughs whether you are high or not.

Space does not allow a full list of films in this genre, but probably the single most popular and best title in this group of comic weed films must be 2008’s “Pineapple Express.” 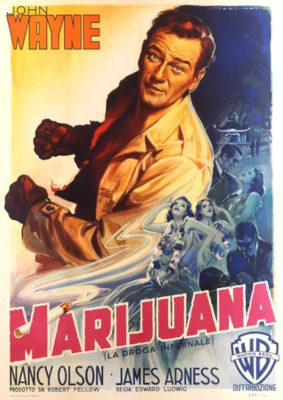 You probably haven’t heard of or seen this John Wayne oddity. Two edits and posters were created for different markets.

This hybrid Cold War anti-marijuana propaganda movie starring John Wayne and James Arness comes across as a wanna-be film noir dressed up like a political thriller.

The Duke plays a detective working for the infamous House Un-American Activities Committee that was set up to weed out (no pun intended) communists from America. The plot follows Wayne and partner (Arness) as they try to break up a nest of commies operating in Hawaii.

“Marijuana” was distributed in the USA under the title “Big Jim McLain,” but in some European markets the film was retitled “Marijuana” and the “communist angle” was edited out, making the villains drug dealers instead of commies. I wonder how the Duke felt about this, or was he behind it?

I’m guessing the producers didn’t think the anti-communist angle would go over well in Europe so in markets like Italy, the film was re-dubbed to make Wayne a hunter of dope smugglers and not political dissidents! This says a lot about the red -scare political hysteria of the time and how easily one fear can be translated to another.

Decades old vintage grindhouse exploitation films are “marijuana movies” that are said to be best appreciated in an altered state. The wonderful posters, all collectibles now, say it all. Consider the following titles and images! You have been warned. 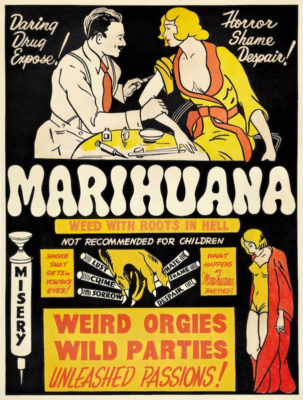 Not much is known about director Dwaine Esper or his screenwriter wife and filmmaking partner Hildegarde Stadie.

The twisty, sensational plot follows a young girl named Burma (Harley Wood – what a great name) to a beach party with her boyfriend where she smokes some dope with a bunch of other girls, one of whom drowns while skinny dipping in the ocean. Burma soon discovers she’s pregnant and she and her boyfriend go to work for the “pusher” in order to make enough money to get married. Makes sense, right? Unfortunately, a drug deal goes bad and her boyfriend is killed leaving a desperate Burma, now on her own, to fend for herself. Burma, without resources, gives up her baby for adoption and becomes a major dope dealer. Is this a success story or a cautionary tale?

Although it unfolds as a detective story, it’s really a thinly held together exposé that played to millions in the 1940’s, helping to sway prohibitionists onto a new target, marijuana. 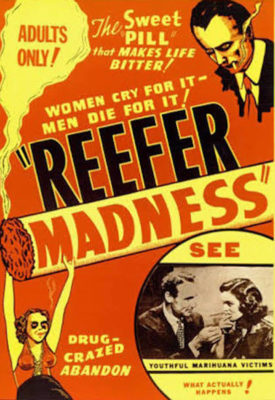 The granddaddy of all anti-marijuana propaganda films relates its story via high school principal Dr. Alfred Carroll (Josef Forte) in a lecture to parents at a PTA meeting. Carroll tells about the dangers to their innocent children using marijuana. He narrates a cautionary tale of what happened to brother and sister Jimmy (Warren McCollum) and Mary Lane (Dorothy Short), and Mary’s boyfriend Bill (Kenneth Craig) after frequenting a “reefer” house where they become hooked into smoking dope and the

High-school principal Dr. Alfred Carroll (Josef Forte) relates to an audience of parents that marijuana can have devastating effects on teens. In his story, a drug supplier entices several restless teens, including sister and brother Mary (Dorothy Short) and Jimmy Lane (Warren McCollum) and Mary’s boyfriend, Bill (Kenneth Craig), into frequenting a “reefer house.” It’s not long before Bill and Jimmy are habitually smoking dope, which dramatically impacts their family lives and leads to a horrific crime. 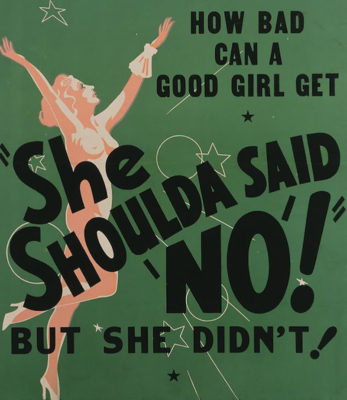 This exploitation film follows in the spirit of morality tales like “Reefer Madness” where one joint will spiral your life into chaos where death is the only escape. Director Sam Newfield used the pseudonym “Sherman Scott. The film starred Lila Leeds and was positioned to capitalize on the widely publicized arrest of Leeds and movie star Robert Mitchum on a charge of marijuana conspiracy.

As time passed, the film was issued under many titles. It struggled to find a distributor until grindhouse presenter Howard W. “Kroger” Babb picked up the rights, reissuing it as “The Story of Lila Leeds and Her Exposé of the Marijuana Racket.” Its relative success came only after the posters were redone and a story fabricated that the film was being presented in conjunction with the United States Treasury Department. In it, a former dancer whose life was nearly destroyed by marijuana joins police in their efforts to stamp out the plant.