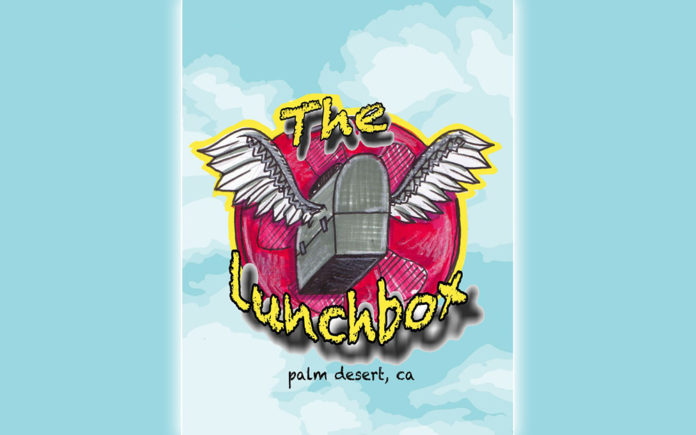 Fabulously tasty sandwiches and salads are at the core of The Lunch Box in Palm Desert. All offered at reasonable prices.

In a secluded little spot in the industrial area off Joni Drive in Palm Desert, sits an awesome little sandwich shop. The interior is cheery, featuring an adhered white picket fence against a colorful painted mountain scape wall. Opened 5 years ago by Kari Kniegge and her business partner Steven Brock, The Lunch Box has been on the radar of local sandwich lovers and even visiting foodies who are in the loop. 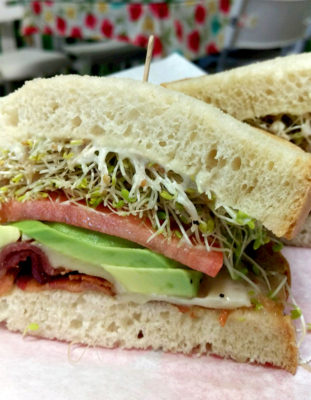 Kniegge’s love for sandwiches started as a child, when her mom had a sandwich shop of her own in North San Diego. Kniegge learned the ins and outs of the business, and waited until the time was right for her to open one of her own. While living in the Coachella Valley for over 20 years, she ripened her skills in the restaurant industry. After some time, she came face to face with an excellent opportunity to open a place of her own. Although not easily seen by mainstream diners, the little spot is very well known to the multitude of businesses and those working in the Joni Drive area.

Their menu is a combination of some sandwich recipes from her mother, and some of her own creations. But there is a mainstay in all of the recipes; they are made with the freshest of ingredients, from high quality meats and vegetables, to homemade dressings and soups, and top notch breads from Bosch Bakery in Thousand Palms.

Speaking of the bread, one of the reasons that make The Lunch Box’s sandwiches so good is what they do to the bread. On the sandwiches that don’t require toasting, or being pressed to melt cheese, the bread is steamed. That’s right, I said steamed. I didn’t even realize that it was a thing that you could do to bread, but apparently it is, and makes an amazing impact on a sandwich. The bread is steamed in a special bread steamer, and makes the bread super soft. It’s especially beneficial when used on sour dough, which can have a tendency to be a little on the hard/dry side.

When I asked Kniegge which one of the sandwiches was her favorite, she quickly pointed out that they all are. However, she did hone in a couple (most come with mayo, tomato and sprouts), one being the Pocket Full of Fallbrook, which is an homage to the decorated capital of avocados. The pocket refers to the pita bread which is steamed and filled with sliced avocado, jack cheese, tomato and alfalfa sprouts. The California Split is also a crowd pleaser, and one that I had the pleasure of trying. It is served on steamed sour dough bread, with alfalfa sprouts, tomato, bacon, jack cheese and avocado. The sandwich was very well constructed, which is important as the filling to bread ratio needs to be balanced (I’m a stickler for it). All the ingredients married well together, as Kniegge said, this popular sandwich is like a super charged club. The bread really stood out to me. I’m telling you, that steaming of the bread thing is incredible, and brought a creamy element to the sandwich. So good!

Other sandwiches include the Turkey Terrific, with sliced turkey piled high on steamed squaw bread with alfalfa sprouts and tomato. The Cheese Makers Grilled Cheese, with sharp and jack cheese, tomato and red onion. And one sandwich that I will be trying on my next visit is The Missile, this taste adventure has pulled pork, thinly sliced ham, pickles, yellow mustard, BBQ sauce and Swiss cheese, all smash grilled on a French roll, can’t wait! There are many more sandwiches to choose from, even some hotdogs as well.

Of course paring a sandwich with some comforting soup, or some chili is always a good idea. The Lunch Box offers some fantastic soups, such as Beef Stroganoff, Garlic Mash and Chix Tortilla (offered mainly in cooler months).

The Lunch Box also offers salads as well if you’re not in the mood for a sandwich. Salad selections include the Postal Salad, which has romaine, avocado, turkey, feta, cucumber and house made croutons. Also on the menu is their Chin-Chik Salad, with chicken, purple and green cabbage, carrot shreds, green onions, cilantro, chow mein crunchies, tossed in their own peanut-sesame dressing, plus many others.

And if all of this weren’t enough for the little nook, they also offer limited breakfast from 7am to 10:30. Patrons can get a quick egg sandwich, burrito or bowl with jack cheese, ham, bacon or turkey. You can get a special bagel named after her mother. Sandwich prices start at a mere $6.95, which is very impressive.

For excellent well priced sandwiches, salads and more, The Lunch Box is the perfect answer. As Kniegge says, “We just want to continue to provide quality food at reasonable prices.”