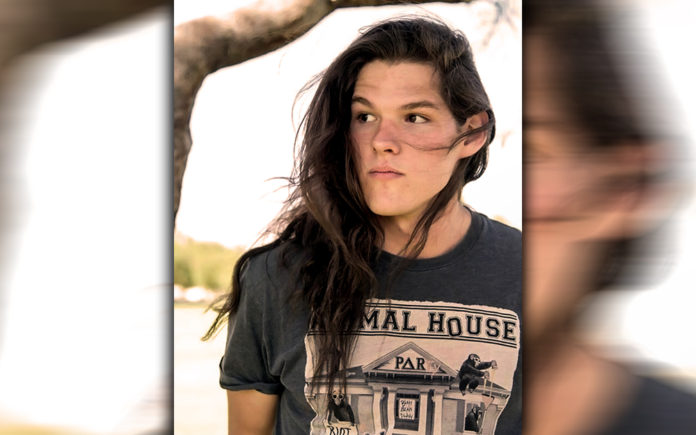 If you were present during ‘Best Guitar’ winner Mark Wadlund’s acceptance speech at the 2019 Coachella Valley Music Awards, then you were witness to his strikingly enthusiastic response and how the electricity of the show increased exponentially. That high-energy, positive outlook is part of Wadlund’s daily bread can be blamed on the supportive upbringing of his parents. Wadlund is the lead guitarist for the Desert Thrash Metal band Instigator. With everyone now out of high school, Instigator is ready to further pursue their dreams of super-stardom and worldwide metal dominance. Rounding out the line-up is Jaxon Fischer on rhythm guitar and vocals, Garrison Calkins on bass and Joe Boomer on drums.

Instigator has a run of six shows throughout July with the highlight being an opening slot on the Headcrusher ‘Seismic Trails 2019 West Coast’ tour at Gadi’s in Yucca Valley on Thursday, July 11 at 8 p.m. Entry fee is $8. Also on that bill is dirty desert scumbags Sleazy Cortez.

Coachella Valley Weekly met with Wadlund at the local Instigator coffee joint Coffee Bean and Tea Leaf in their home base of La Quinta, California.

CVW: How did you feel during your acceptance of the ‘Best Guitar’ award? 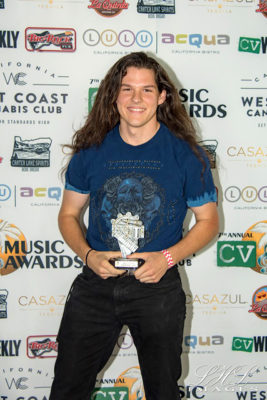 Wadlund: “Of course, I gave my epic speech. Going up there was a real trip because it’s a mix of something I’ve been doing it for. It’s the reason why a lot of people play guitar. It’s to get that recognition. ‘Look at this guy, he shreds!’ You have the whole valley participating and appreciating that too. It’s mind boggling. At the same time, I’m in a Catch-22, I really love and appreciate the award and it means a lot. I’m never going to forget the guitarists who were there like Brian ‘Puke’ Parnell, who’s producing us. All the guys on that list are kick-ass and outstanding guitar players; Arthur Seay, Nick Hales, Tom Edwards, Christian Colin, Danny White, Martin Barrera, Mike Pygmie and Chris Rivera.”

CVW: You gave a very emphatic speech about embracing metal.

Wadlund: “Once I got up on stage, the number one thing I wanted to do was plug the band and tell people about Instigator. That’s what it’s about. People can shred on a record, get in the studio. There’s a lot of people who can practice, take after take, and make themselves sound really good. But if you can do it live that’s a whole other story. That’s what I want to encourage, just people shredding in people’s faces.”

CVW: What do you say to anyone questioning your youth and what can be done to battle the ageism that goes on in the music industry?

Wadlund: “I’m only 19 going up there and there’s guys that have been playing 20-30 years. I’ve been playing for 5 years. It’s hard to hide our youth but we’re finding it’s more and more necessary to do that and take ourselves much more seriously. The 30-40-year-old guys doing this stuff, I honestly and wholeheartedly appreciate all the artists in this whole valley. Good music is good music. It’s the elder, superiority attitude that needs to immediately be diminished. Number one; for the sake and the bettering of everybody. Number two; for the youth. In the communities of Palm Springs and Palm Desert you have this generally older community who are more dominant, it’s hard for the youth to get out. It’s not necessarily the number of youths. The Nest is more popular than The Hood which could really be stepping up.”

CVW: What can be done to improve opportunities for our youth using music as a conductor? 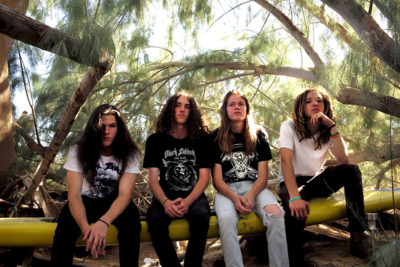 Wadlund: “That’s why I said we really need to pay attention to the rock and the metal that’s going on. Some of this music, when Thrash Metal is really done correctly, when it’s focused and practiced, when the show is developed in the correct fashion, when you really nail it down, it’s an experience for everybody. That’s why I want to get as many of the youngsters out to the Instigator shows. I believe kids want Thrash Metal. Metal is becoming more and more relevant, surprisingly relevant. Our songs aren’t about killing and pillaging, beer and politics. It’s a cry out for the younger communities. Many of us in the valley have a message. That’s why it’s really important to listen.”

CVW: Metal, in particular, is still a misunderstood spectrum of genres. What can those who are less informed do to better understand?

Wadlund: “You just have to get in front of the Marshall cabs. Kids don’t know. It’s nothing you’ll be able to experience on your smartphone or laptop. When you go to these concerts and you stand in front of these 4×12 Marshall cabinets and the real bass cabinet, it’s immense. Kids aren’t doing enough of it. There’s a couple things I feel are responsible for this not happening. A hyper focus on popular music like Rap and Hip-Hop. That’s great; we all listen to that music. I want to show people why Metal music is so important.”

CVW: You have several weekly shows lined-up. You’re definitely putting your money where your mouth is.

Wadlund: “We’ll be performing shows every week for the next six weeks. It’s going to be insane. We just want to throw ourselves out there. We have a new full-length album coming out. Built To Defy was our debut for the valley. I think this next record will be our debut to the world. We wanted to show the valley what Thrash Metal was through that album. For this new album, we have a couple of working titles. For now we call it Necessary Evil, one of the singles. The new album will have 12 all-new tracks. All originals, no covers. The guitar will be front and center. I think guitar and the guitar solo are such lost and forgotten artforms.”

CVW: Who showed you guitar in the first place and how did you master it?
Wadlund: “YouTube and my parents. One of the best ways to find out about music is through old CDs and the radio of your parents. I love my parents. They have always supported me. They didn’t buy me a guitar. They encouraged me to get a job and buy as many guitars as I wanted. It’s a big difference between your parents buying you a beginner guitar and getting a job and taking it in your own hands and then buying an 80’s vintage Marshall combo tube amp and a black Gibson Explorer with white pic guard.”

CVW: How did your fellow band members react to you winning?

Wadlund: “They were really pumped. Right after I won the award, I ran over to them and hugged them. The first thing I said at the podium is, ‘I am from Instigator’. I won this award because we practice our instruments and we beat them down. We live for the art.”

CVW: It can be very difficult to maintain a successful career in the music industry. What else are you doing to fulfill your dream?
Wadlund: “It’s becoming a really hard industry to get into. My brothers are going into mechanical school and firefighting and I’m kicking it with this rock band thing. Right now I’m looking for mentors. I look up to Arthur Seay. I’ve always looked to him. I love what he has done and is doing. He won the Trailblazer Award for God’s sake!”

CVW: Instigator prides itself on instrumentation and accuracy. What more do you want to relay?

Wadlund: “We play real instruments. When you’re really out there doing it, you can’t hide the authenticity and genuine action and emotion. That’s what I find really important to get out there, the message. I really want our youth to come check it out.”

CVW: How often do you pick up the guitar?

Wadlund: “It hasn’t been every day recently. I have a job working at a hardwood flooring place in Palm Desert. I’m hanging out with my girlfriend. I bought her a guitar so I go over there and play it. I always thrive when I surround myself with the guitar. On the average, I’m practicing 8-10 hours a week and jamming with the band for a few hours a week.”

CVW: When will the new album see the light of day?

Wadlund: “We’ve talked about the end of fall. We still have some mixing and mastering to do and artwork. We’re keeping it DIY so it’s taking some time. It makes it more difficult, but also more authentic. It’s going to be a great piece of work; it’s us. We’ve got new merch coming out too. That’s one of the most exciting things. That’s one of the best ways for artists to support artists is through merch sales.”

Wadlund: “Instigator, Power Trip and Lamb of God. The headliner would have to be Megadeth. Any of The Big Four bands really, but more specifically Megadeth. I would open up for Anthrax, Slayer and obviously Metallica. We’ve been building our resume. We opened for everybody out here. We’ve played The Hood Bar and Pizza more than 15 times. We’ve done it over three years, and it’s been a journey. We’ve opened for bigger bands too like D.R.I. and Doyle of The Misfits.”

CVW: Will Instigator tour outside of the area in the near future?

Wadlund: “We’re having a transition period. Just prioritizing as a band. It’s difficult because this is a time where people our age are finding themselves. To take a trust fall like that is really scary but we are hungry. We’re ready to take the steps. Sometime in the fall we’re looking to do a west coast tour. We’ve played Yucca Valley, Joshua Tree and L.A. We want to experience all the different venues. The Date Shed was our first show and we want to get back there if possible. We played plenty of house parties and we’ve played our high school a few times. We got asked to play Mexico too. We need a van. If anyone is willing to donate a van to us, we’re willing to take it. We want to go on tour. It forces us to be Instigator.”