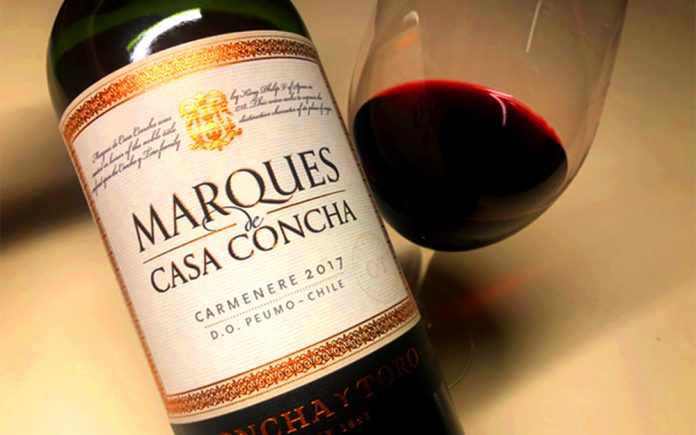 You loyal readers already know that I like to put on my professor hat, vest, and glasses to give a little historic and/or geographic introduction to the wonderful wines we’ll be covering.  So—okay: brace yourself for a brief class in session:

Chilean wine has a long history as a New World wine region. In the 1500s, Spanish conquistadors brought wine grape vines with them when they colonized the region. Wise Spanish agronomists saw the climate as ideal for growing all the types of grapes that were present in Europe.

Marques de Casa Concha made its debut in 1976 and rapidly became Chile’s most iconic line of premium wines. It is currently exported to more than 100 countries.

Chile’s Central Valley is the country’s ancestral home for winemaking, with sun-drenched valleys, well-drained, infertile soils, and cooling breezes. The Chilean wine country within the long Central Valley is not a single region but a series of valleys differing in size and elevation; each with their own microclimates and rivers that guide the cooling breezes from the Pacific Ocean on the west and the Andes Mountains on the east.

Here, in the kaleidoscope of microclimates, winemaker Marcelo Papa has made it his life’s work to discover and match the right grape with its ideal terroir, creating the wines of Marques de Casa Concha.

His spirit as an incessant explorer as well as his passion and enthusiasm for discovering the authenticity and nobility of the different denominations of origin have led him to find the best places to produce excellent and noble wines, making him one of the most influential figures in the Chilean wine industry today. In fact, the renowned English wine critic Tim Atkin honored him with the title of Winemaker of the Year in 2019.

Marcelo is known as the “Seeker of Noble Roots” for his enthusiasm for exploring Chile’s different wine valleys in search of the noble roots of the best places to grow each variety of Marques de Casa Concha.

As mentioned previously, the Marques winery has rapidly become Chile’s most iconic line of premium wines. It is currently exported to more than 100 countries. So it’s a very special treat for us Californian’s to taste the wonderful wines that are being produced in Chile, and made available to us at the most reasonable prices for the quality.

By the way, some of you wine fans of the past will remember when the news came out that after quite a few years of producing “Chilean Merlot”, many wine professionals claimed that the Merlot planted in Chile was not Merlot, rather, it was Carménère (“car-men-nair”).   Both Merlot and Carménère are some of the blending varietals that make up the red wine of Bordeaux. But after wine DNA testing, many vines were indeed Carménère.  Don’t be so hard on the vintners; but there surely is a varietal distinction.

On the subject of Carménère, here’s a great opportunity to learn how this varietal shows itself in the soils of Chile:

In the Cachapoal Valley, Peumo Vineyard is one of Concha y Toro’s oldest, and is the ideal microclimate for growing Carménère, creating internationally renowned varietal wines. With a moderate climate with wide diurnal swings, the grapes ripen slowly and develop their intense berry, chocolate, bell pepper, and black currants flavors that are the hallmarks of truly exceptional Carménère.

As part of a narrow longitudinal valley running parallel to the Andes, the vines are protected from frost in spring and fall, extending the growing season so the tannins can develop and soften, creating elegant wines.

And now, let’s check it out! Marques de Casa Concha Carmenere 2020 ($24.99). Beautifully deep dark red in color, with intense notes of ripe plums, black currants, and dark chocolate, along with firm tannic structure and pronounced acidity.  This was a real treat! If you think you’ve tasted though all of the Bordeaux varietals grown in the Americas, wait until you’ve enjoyed this wine: Awake your senses!

The wine portfolio of Marques de Casa Concha is a modern showcase of delicious red and white wine.  As you would expect, their Cabernet Sauvignon is world class and sells incredibly below its quality mark.

As one of the oldest sub-regions in Chile, abutting the city of Santiago and just steps from the Andes Mountains, Maipo Valley is the spot for Cabernet Sauvignon, winning awards and accolades consistently for over twenty years. For Concha y Toro, the best sites are undeniably the Puente Alto and Pirque Vineyards.

With rocky, alluvial hillsides providing multiple exposures, days that are warm and dry with cold nights, and rainfall mostly limited to the winter months. The Cabernet Sauvignon grown here has firm tannins and a smooth structure with lush dark red fruit.

Finding the exact microclimates for the classic varieties has created success for Chile and the Marques winery, thanks to Marcelo Papa’s efforts and the foresight of Concha y Toro’s founders.

And now, the Marques de Casa Concha Cabernet Sauvignon 2019 ($24.99) Deep red with lush cherry, black currant, and blackberry aromas with a touch of tar and smoke. The texture is smooth—almost silky—and masks the firm tannic structure that lies below and only appears on the lingering finish.  The grill is on!

We’ll circle around to this winery next month to showcase their fabulous Sauv Blancs and Chardonnays that are some of the most refreshing quaffs to come from Chile.  Salud!