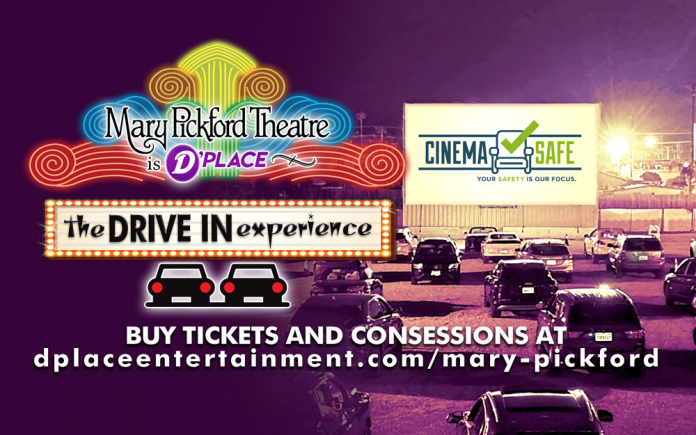 With Riverside County recently moving into the purple tier of its color-coded COVID county tracking system, movie theaters are not allowed to resume indoor operations, however, a vintage way of enjoying films has become in vogue in the midst of the pandemic. Mary Pickford Theatre is D’Place in Cathedral City is one of the local Coachella Valley theaters that has adapted a drive-in cinematic experience.

General Manager of the theater, Ted Hane, is now also managing the Drive-In Experience. Hane had been approached by countless people over the course of pandemic who inquired about starting a drive-in. It wasn’t until June of this year that the Mary Pickford Theatre had begun a rapid succession of openings and closures with the rise in COVID cases that Hane had put the idea into action. 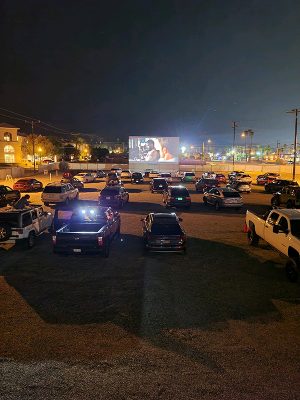 “We did quite a bit of investigating to understand what we would need to make the drive-in a reality, mainly the site. We had to get land, so we applied for an area of land from the city and we got approval in August. As soon as we got approval, we moved to get containers and everything else we’d need,” explained Hane.

The creation of the Drive-In Experience was a collaborative effort with other theater companies that have also been forced to expand outside of their walls and other fully established drive-ins that have reopened amid the pandemic. Opening the weekend of September 25, the Drive-In Experience has garnered a lot of foot traffic from curious passersby after seeing the lit marquee on the lot across the street from the original theater location.

“We continue to grow and people have become more interested in what we’re doing. I’ve already seen some people who’ve attended more than once. If I can get more and more people who keep coming back consistently, then that makes my job easy. But right now, everything is a learning process. We are constantly adapting and improving. So if someone comes to the drive-in and shows up again two weeks later, we’re already doing things differently,” said Hane. 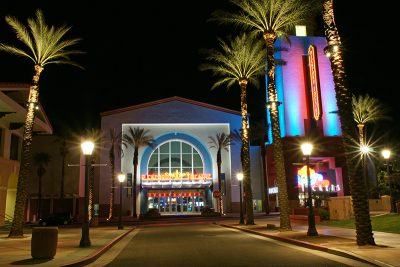 Before the COVID-19 pandemic, it was never in the scope of the company’s reality that drive-in theaters would make as big a comeback in 2020, as they had previously been a dying art form. Now pop-up drive-ins are a necessity to keep theater franchises afloat in an age with so many business restrictions. The Drive-In Experience also provides families with a way to spend time together, since sporting events, theme parks, and other group activities are limited with the safety guidelines.

Hane hopes that the longer the drive-in is in operation, the more new events and features will be added to the theater lineup. There are plans to add a “Musical Monday” and “Taco Tuesday,” courtesy of Los Arcos Mexican Restaurant, to the mix. The Drive-In Experience is currently operating seven days a week with at least one film being shown per night, and two films on Friday and Saturday. Concessions are also available onsite to be delivered to cars.

“You don’t have to wait in line and we have a system in place. You just check in and tell us which spot you’re at, then we come and take your order, and you can just stay in your car and enjoy the movie. The popcorn is made at the theater across the street and transported to the drive-in via golf cart. All the other concessions are pre-packaged and sealed,” stated Hane.

In the future, Hane hopes to expand the menu to include ice cream, caramel corn, and pizza prepared at the theater’s cafe. Concessions are a key component of how the drive-in generates revenue, especially since the Mary Pickford has suffered around three million dollars in losses from the pandemic this year. Regardless, the theater is hoping to give back to the community and has partnered with charities and organizations like the Boys & Girls Club for special screenings to support the cause. 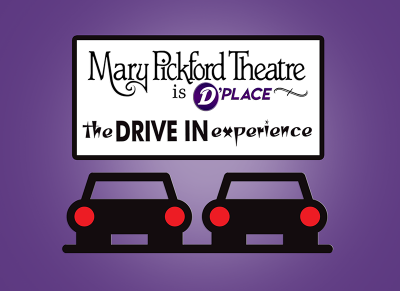 All tickets for the Drive-In Experience are $9.99 general admission and are only available online at dplaceentertainment.com. One ticket per person is required, but kids two years and younger are free. The drive-in will host a special Halloween Spooktacular on October 30, playing two classic horror films from the 80s for the price of one movie starting with Friday the 13th at 7 p.m. and Pet Sematary at 9:15 p.m. On Halloween night, the same double feature deal will take place with a showing of The Nightmare Before Christmas and the 2019 animated Addams Family film. On November 1, a showing of Coco will be presented to celebrate Dia de los Muertos with an admission price of only $5.99. Those who arrive dressed in costume on Halloween night and on November 1 will receive free candy.

“Drive-ins are special because they have a nostalgic factor. Some of the older attendees get really excited because they had their first date with their spouse at a drive-in when they were younger and they get to relive that moment. Now we’re introducing drive-ins to a whole new generation who have never been to one before. We hope as COVID diminishes, we can allow people to come out of their cars and sit outside together. For now, we are happy to be up and running, and it is truly what keeps us going,” stated Hane.