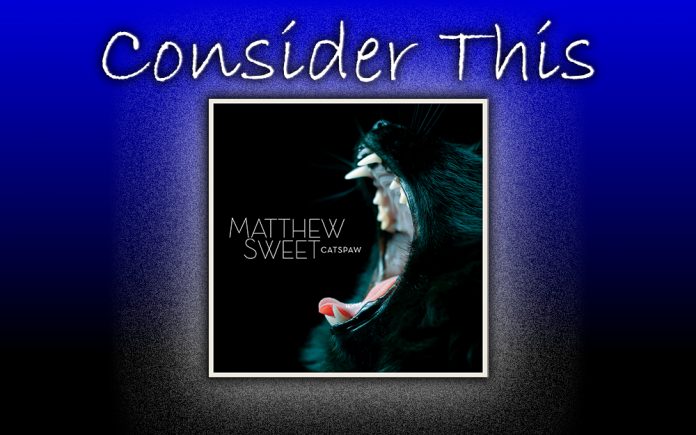 It’s hard to believe it’s been nearly 30 years since Matthew Sweet released his watershed album “Girlfriend.” Crisp and angular, the melodies echoed seminal influences like the Beatles, Big Star, R.E.M. and Neil Young. The lyrics chronicled the heartache, bitterness and regret, following the dissolution of his marriage. A surprise hit, it was critically and commercially successful, going into heavy rotation on MTV and receiving radio airplay on taste-making stations like KROQ and KCRW. He had been playing music professionally for nearly a decade, and it was finally paying off.

Born and raised in Lincoln, Nebraska, Sidney Matthew Sweet became obsessed with music at an early age and by high school he was writing and recording his own music and playing in a band called The Specs. By the time he was fronting The Dialtones he managed to meet his new favorite band, R.E.M., and became pen-pals with their front-man Michael Stipe The connection motivated him to attend summer school in their hometown, Athens, Georgia.

He quickly became part of Athens’ thriving music scene, connecting with bands like Pylon, Love Tractor and The B-52’s. He spent his only semester of college at University Of Georgia, before dropping out and pursuing music fulltime. He briefly worked on a side-project with R.E.M. vocalist Michael Stipe before forming Oh-Ok with Michael’s sister, Lynda, and drummer David Pierce. Soon he and David branched off with Buzz Of Delight. Both bands came to the attention of Columbia Records, who offered Matthew a solo deal.

By the mid-‘80s, Matthew was newly married and living in New York. His debut, “Inside,” arrived in 1986 and received decent reviews, but stalled commercially. His profile raised considerably when he added bass and vocals to the No Wave/New Wave supergroup, Golden Palominos. Led by Anton Fier, it featured a rotating line-up that included Michael Stipe, Syd Straw, ex-Sex Pistols vocalist John Lydon and T-Bone Burnett.

His second solo album, “Earth” was released via A&M. Much like his debut, Matthew played nearly everything, receiving some superstar assists from guitarist Robert Quine (Lou Reed, Richard Hell) and bassist Richard Lloyd (Television). Again, reviews were great, but that didn’t translate to increased sales. Unfortunately, that was the least of his problems. Not only was his marriage coming apart at the seams, A&M cut their losses and dropped him from the label, plus his house had flooded, destroying all his guitars and albums.

After spending some time on the road playing bass in Lloyd Cole’s band, Matthew got down to business. Sometimes great art is borne out of great pain, such was the case with “Girlfriend.” Enlisting Robert Quine and Richard Lloyd again, the expanded roster included Lloyd Cole on guitar, multi-instrumentalist Greg Liesz and drummer Ric Menck. Co-produced by Fred Maher, he created a Punky Power-Pop masterpiece. After touring extensively behind the album, he relocated to Los Angeles.

For the rest of the decade he cranked out a series of brilliant albums, 1993’s ragged rocker “Altered Beast,” 1995’s “100% Fun” was a potent combo-platter of Power Pop and alt.rock. “Blue Sky Mars” arrived in 1997, using Baroque Pop and Psychedelia as a musical blueprint. Two years later, “In Reverse” revealed his affinity for Phil Spector-flavored Wall-Of-Sound production.

After a wildly prolific decade, Matthew dialed it back a bit at the beginning of the 21st century, collaborating with kindred spirits. In 2002 he teamed with singer-songwriters Pete Droge and Shawn Mullins, forming The Thorns, a Crosby, Stills & Nash inspired trio that concentrated on close harmonies and sharp acoustic instrumentation. Having always enjoyed a massive following in Japan, in 2003, he rewarded those fans with the Japanese-only release of “Kim Ga Suki *Raifu” an album of Garage-y rockers. The following year he switched gears with the mostly acoustic “Living Things.”

Having collaborated with ex-Bangle Susanna Hoffs on a song for the first “Austin Powers” film, the pair reunited in 2006 as “Sid n’ Susie” and recorded “Under The Covers.” Something of a busman’s holiday, the album featured their take on 15 of their favorite songs from the ‘60s. Their vocal blend landed somewhere between Sonny & Cher and Nancy Sinatra’s duets with Lee Hazelwood. In between two more solo efforts, 2008’s “Sunshine Lies” and 2011’s “Modern Art” He and Susannah returned to the well for a volume two of favorite ‘70s songs and a third volume concentrating on the ‘80s. Matthew also produced the Bangles’ “Sweetheart Of The Sun” album.

After decades in Los Angeles, Matthew and his wife Lisa pulled up stakes and returned to his home state, buying a house in Nebraska large enough to include a recording studio. There he began recording his 12th solo album, the superlative “Tomorrow Forever.” Sadly, in the midst of that process, his mother passed away.

Released in 2017, “Tomorrow Forever” was hailed as his most assured and satisfying effort since “Girlfriend.” Less than a year later, he returned with “Tomorrow’s Daughter.” Made up of outtakes from the “…Forever” sessions, the record contained as many harmonies and hooks as its predecessor. He capped off 2018 with the Record Store Day vinyl only, release, “Wicked System Of Things” that paid homage to antecedents like Cheap Trick, The Shoes and The Raspberries.

Now he has emerged with his 15th solo album, “Catspaw.” Surprisingly stripped-down, it features longtime collaborator Ric Menck on drums and Matthew on, well, everything else. The album kicks into gear with the primordial crunch of “Blown Away.” A bludgeoning beat crashes down with Hammer-Of-The-Gods intensity, swaddled by plinky keys, menacing bass and guitars that strafe and sting. Sighing vocals almost leaven feelings of discontent and ennui; “Is there anything to know that I don’t know, I don’t know/Was there anywhere to go I didn’t go, I didn’t go.” Guitars burrow and skronk on the break, allowing Matthew to unleash his inner Crazy Horse.

The ‘60s are alive and well on both “Hold On Tight” and “Give A Little.” The former opens with the same cluster of comforting chords that characterized the Youngbloods seminal anthem for peace, “Get Together.” But latticed on top, in typical Matthew fashion, are lead riffs that wail and yowl, nearly undercutting bucolic lyrics like “Deep inside you there’s a heart that never sleeps, it listens for the joy as willows weep.”

On the latter, biting lyrics take a smug cynic to task, but offers some tough love; “Everybody likes you, but it don’t excite you, everybody wants you but it’s not a game you play, you play/So you’ve seen it all, why can’t you see it’s all new, say you’ve gone away but I’m not going to write you off, write you off.” Brittle guitars bob and weave between verses, but the lithe chorus shares some musical DNA with an unlikely source, “Open Up Your Heart (And Let The Sunshine In),” which was sung by Pebbles and Bamm-Bamm on an episode of “The Flintstones.”

The best tracks here unfurl one after the next, offering Matthew’s patented synthesis of Power Pop, Country Rock and Baroque Psychedelia. “Challenge The Gods” questions conventional concerns, refusing to back down. Anchored by a pile-driving beat, guitars shapeshift, spiky one moment, shimmery the next. Grit and determination underscore defiant lyrics like “Rise above, take your place, punch the world in the face.”

“Come Home” is powered by spiraling guitars, angular bass lines and a kick-drum beat. The lyrics offer a lonely encomium to his absent spouse; “When I wake up and recall, drag myself out of the bed, every time feels like I fall, even farther than I’ve been/I remember how it feels to be lost without you, when are you gonna come home, when are you gonna come home?” The guitar solo on the break is a mosaic of sound and color, mirroring the lyrics’ restless melancholia.

The Countrified “Drifting” is a blend of burnished guitars, sepia-tone bass and a walloping big beat. A climatized carpe diem, lyrics like “Seize the moment now, it doesn’t matter what you say, hold without asking how this came to be…the time fills with seasons our lives all the same, oh you’re in the wind, you’re in the sun, you’re in the sun,” feel wildly apropos during these precarious days.

Meanwhile, on “The Best Of Me” elastic guitar riffs crest over prowling bass and a chunky rhythm. The quiet confidence of the melody, arrangement and instrumentation can’t camouflage lyrics that simply throb with self-doubt, regret and recrimination. Matthew’s still boyish tenor is awash in insecurity as he wonders “What if the best of me isn’t good enough, and any world that doesn’t have me is better off without/What if my fear says all there is to say about the rest of me.”

Other interesting tracks include the dissonant see-saw of “At A Loss,” the cantilevered Country-tinged/ Power Pop of “No Surprise” and the astral love song, “Stars Explode.” The record reaches the finish line with the one-two punch of “Coming Soon” and “Parade Of Lights.” Despite the jaunty melody and buoyant vocals on “Coming Soon,” the lyrics offer a mixed message; “You’ve arrived to bring about the end of the world, I’m about to make you mine, you’re about to see me as I want to be seen, so I’m already feeling high.” Rev’d up guitars hug the melody’s hairpin turns as honeyed harmonies insist, “life is but a dream.” Finally, “Parade…” exits with more of a bang, than a whimper. Squally guitars skitter and spark, bookended by loose-limbed bass and a punishing beat. Vocals and guitars intertwine, urging us “right back to where you’ve been.”

“Catspaw” is dense and intricate, recalling the AOR sheen of ‘70s hitmakers like Boston, Peter Frampton and Kansas. Essentially, the music he couldn’t help but absorb as a teenager, holed up in his room writing his earliest songs, woodshedding on the bass and dreaming of a career in Rock & Roll.

Decades later, having achieved those goals, it feels wholly apropos and sweetly symmetrical that his first real solo effort was created in his home studio, in his native state. Worlds colliding in the nicest possible way.