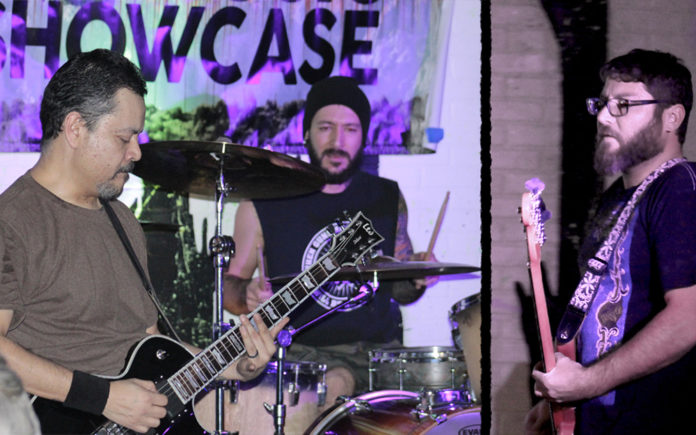 As power trios go, MEGA SUN is in its early stages. Having wowed the audience and judges at The Hood Bar and Pizza for the Coachella Valley Weekly CV Music Showcase in early January 2018, the desert rock band had only been together a few months. After watching and listening to some of their live footage, it’s apparent their superiority will only be limited by their vision. With Jeremy Parsons on vocals and bass guitar, Chris Rivera on guitar and Tyler Ontiveros on drums, MEGA SUN have just begun to shine on the heavy rock world. I had the chance to communicate with the band in anticipation of their biggest show to date with DEATH IN PRETTY WRAPPING, SE7EN4 and SLEAZY CORTEZ on Friday, February 16, 2018 at the Hood Bar and Pizza. Entry fee is $5.00. Show starts at 9:00. 21 & over.

Ontiveros: “Chris, who comes from a musically inclined lineage, being related to the Evaro family, reached out to me mentioning a new project was underway. He and Jeremy, formerly of WHISKEY & KNIVES, were looking for a drummer and I heeded the call. I was more than stoked to get back in the local music scene after a long hiatus due to breaking my right leg and my former bands DROP THE WORLD and ONE SHOT THRILL either breaking up or going through line-up changes, but those hurdles would not keep me away from doing what I love. After a couple jam sessions with these talented dudes, I was hooked and pumped on what we could become.”

Rivera: “I found Jeremy on bandmix.com. He conveniently lived two streets away. We quickly learned we clicked musically and soon found ourselves on the hunt for a drummer. Tyler’s name was given to us by two different people so we contacted him through Facebook. From the moment I heard him I knew he was the guy.”

Parsons: “Chris and I started playing and just trying to come up with some ideas of a more aggressive appreciation for the sounds we grew up with here in the desert. Trying to mimic and make it sound modern with the grit of the new horizon of what the desert has to offer. Immediately after agreeing that we were going to do this, we started looking for musicians. In that process we left Chris to man the guitar responsibilities and I would venture on to an unknown territory playing bass guitar. We always assumed that I would be the vocalist of the band but not ever setting it in stone and that the idea of the band and any players are welcome. A very minimal time went by and we were introduced to Tyler and had our first jam. After a brief 30 minute introduction to what MEGA SUN would potentially be, it ended as fast as it started, with police in full riot/SWAT gear at my front door. It was at that moment that I knew that we were being heard.”

Ontiveros: “MEGA SUN is a hard-hitting, in-your-face, three-piece rock band from Palm Desert and La Quinta, California with a sound that was influenced by former bands, local musicians and of course, some of our favorites. You could say that there’s that familiar “desert rock” vibe in there but we don’t want to limit ourselves as we are only just getting started.”

Rivera: “I grew up here in the desert. Some of my fondest memories are from the generator parties. UNSOUND, ACROSS THE RIVER, and SORT OF QUARTET are just a few bands I grew up listening to. I think we’re trying to keep the desert vibe alive and still do our own thing. I think we are just scraping the surface of our sound. We’ve only been together seven months and this will be our 4th show so we are really still finding our way. There is definitely chemistry in our song writing.”

Parsons: “Right now it’s very much on the side of aggression and boil your blood. It’s a tall order to do this show after show. But us being new, we need to test our limits and physically push ourselves.”

CVW: What’s on the horizon for MEGA SUN?

Ontiveros: “MEGA SUN was fortunate enough to have some very promising doors open just after playing our third show. We are extremely excited for what’s to come but don’t want to let the cat out of the bag quite yet. We have a great show coming up at The Hood with a killer line-up. Since our last appearance at Round 2 of the CV Weekly Music Showcase, we have come up with a couple news songs that we are looking forward to performing for everyone. They definitely show the direction we are headed.”

Rivera: “Our focus is to continue playing shows and keep writing new music. We are also looking forward to recording our demo.”

Parsons: “We have the normal get established band check list. Get a recording completed and schedule shows. The 16th at The Hood is our next big thing. Let’s see what the future holds.”

Ontiveros: “For now, you will just have to come out to a show to see and hear what we’re all about. Recording is in the near future. We promise you this.”

Ontiveros: “I think I can speak for the whole band when I say, we couldn’t have been more stoked to be asked to play this show. It’s a killer line-up and sure to be a packed house. We gladly accepted the opportunity to share the stage with local favorites SE7EN4, DEATH IN PRETTY WRAPPING and SLEAZY CORTEZ. You don’t want to be in your chonies on the couch for this one.”

Rivera: “I’m excited. It’s the biggest show we will have played thus far. We’re really grateful for the opportunity. Can’t wait to share the stage with some great bands!”

Parsons: “We are very humbled to be invited to play. We’re all very excited and can’t express how much we appreciate the opportunity. We are in debt to everyone involved.”

CVW: MEGA SUN banged some heads and opened some ears at the CV Music Showcase. Describe that feeling & how you plan to stay in the foreground.

Ontiveros: “For me, it was our first real chance to play for a crowd that really wanted to listen. It was a little nerve-racking knowing that we had industry professionals right in front of us watching our every move; definitely a different experience than being able to have the crowd in front of you to feed off of. Overall we had a great time that night and can say that we were truly taken aback by the response we received not only from the judges’ critique but from the crowd as well. We are grateful to have been a part of this awesome local showcase. We appreciate all the support thus far and have every intention of keeping up this momentum.”

Rivera: “It felt really good to get such a positive reaction. We realize we have a lot of work to do but we are excited to see where this goes.”

Parsons: “It was for sure an intimidating situation having the judges seated four feet away and the second we hit our first chord, they all reached for their ears. It felt like we were definitely way louder than the bands that performed prior to us, so when they handed out their critiques we were all pleasantly surprised.”

Don’t miss MEGA SUN on Friday, February 16, 2018 at The Hood Bar and Pizza with DEATH IN PRETTY WRAPPING, SE7EN4 and SLEAZY CORTEZ Cover charge is $5.00.