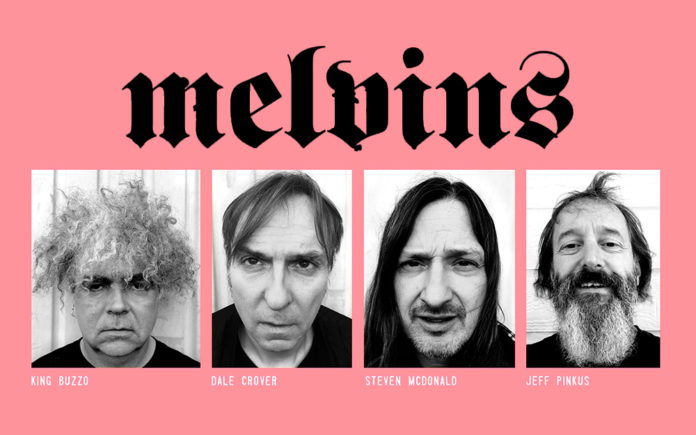 The SOLD OUT Stoned and Dusted is presented by the California Desert Wizards Association. On Saturday May 25th at the desert’s premiere roadhouse and one of the world’s favorite music venues, Pappy & Harriet’s Pioneertown Palace, the outside event of the year will feature Melvins, Fu Manchu, Brant Bjork, REZN, Jesika Von Rabbit and (Big) Pig with lights by the Mad Alchemy Liquid Light Show.

Melvins recently announced their Fall 2019 Tour of the U.S. with Redd Kross and ShitKid.

Coachella Valley Weekly recently spoke with King Buzzo and we covered a variety of topics occasionally hitting on the music.

It’s a ton of stuff. I think in the last two months we’ve recorded 35 songs.”

Buzz on the Melvins Legacy

“Legacy is not anything I’ve ever really kind of worried about. There’s not really much I can do about that. You just do what you’re doing. You get out of the way of it. Let people decide what they think. Once you make the records, if you’re satisfied with them, you just walk away from it. Then it becomes somebody else’s.”

“Our attitude really hasn’t changed, that’s kind of the thing. I consider us a contemporary band. I don’t think we’re an oldie type of band. We can’t go out and play the hits because we really don’t have any hits. We’re a band that’s worried about whatever new thing we’re working on more so than the stuff we’ve done in the past. I don’t think that we really need to make records but I like making records. We’ve recorded north of 400 songs. I don’t think it’s a problem us having material. I’m a songwriter, that’s what I do. To ‘not’ do that is not something that is part of my nature. I guess it’s kept me young. The Rolling Stones and Bob Dylan are still doing it.”

Buzz on His Stomping Grounds & the Desert

“I feel a connection to Southern California in general. I’ve lived in Southern California now for 26 years. In California for 33 years. Well over half of my life. 99% of the work that I’ve done has been in California. I feel like we’re a California band. I appreciate bands everywhere but Southern California is definitely my home. No question. It’s where I feel at home. I miss Southern California when I’m gone. To be able to go and play a show anywhere is nice. To go out and play in the desert, we’ve always had a good reception out there. I know lots and lots of people from that area. But I wouldn’t say that it’s more so than when I go play a show in San Diego, Orange County or Los Angeles, I feel appreciative of all of it. I think it’s all part of the same deal. We have often joked we want to do a tour of just California. I think we could do probably 20 shows. The desert would be a big part of that for sure.”

“I haven’t had a drink since the 80’s. It’s by choice. It’s better for everybody if I don’t drink, including me. When I drank, I never drank in bars. I didn’t see the point. Alcohol made me want to go on adventures, running wild. Sitting in a fucking bar listening to clever talk, it’s the last thing I wanted to do. I wanted to run wild.”

“I’m a true believer when it comes to liberty. I believe you should be able to be the master of your own destiny. If that’s what yanks your crank fine with me. I’m in. I think it’s a good thing. I think you should be allowed to do what you want. I’m very very liberal when it comes to that sort of thing. I am for the legalization of all drugs. Every drug. If you want to do those drugs I don’t see why some politician should tell you, you can’t. It’s bullshit. It doesn’t make any sense to me. I think it should be left between you and your doctor. If you want to buy anabolic steroids and do as much as you want, who am I to tell you no? It’s none of my fucking business. If you want to do Oxys it’s your business. I would advise you not to. But if that’s what you want to do, why should that be a criminal offense. It’s nobody’s business what I’m doing. And nobody said that better than The Rolling Stones. It’s nobody’s business what they were doing. It’s like, I didn’t even know I wanted to do that until you told me I couldn’t. It’s also I didn’t even know I didn’t want to do that until you told me I had to. I’m a firm believer in that. I believe in personal responsibility. You want to destroy your life with drugs, fine with me. Good. Do it. Don’t expect me to pick up the pieces. I’ll give you all the freedom in the world. I think you should have freedom to do that stuff that you want to in the entire world and you should be able to do it safely and cleanly from a pharmacy and a place you know you’re getting quality whatever it is. You shouldn’t have to worry about that. That’s what I really believe. It’s funny a few of these people that will say, ‘I’m pro-marijuana’ and then you ask them about the rest of the stuff and they say, ‘well, we can’t do that’, I’m like, ‘oh really?’ so you’re the prude in the room, not me. If you had told me 20 years ago that in 2019 that you would be able to legally smoke pot at a gay wedding I would have told you you’re crazy. Here we are. Things change for the better. Nothing bad is going to happen as a result of that. If you legalize those kinds of drugs in the U.S., Mexican drug cartels are out of business tomorrow. If I want to drink tequila until I die who are you to tell me I can’t? I don’t want some fucking asshole in Sacramento or Washington telling me what I can or can’t do. Fuck you guys! It’s none of your goddamn business what I’m doing. It’s also none of your goddamn business what I do for a living. Nobody’s business equals nobody’s business. And the people who are into minding their own business rarely want to be in charge. That’s the truth. I’m the true liberty person. Not these people who think they are. I don’t want to tell you what to do at all. If you’re not hurting somebody else I don’t give a shit what you do. I don’t care. It’s none of my business. That seems like the natural progression of things. It’s the way it should be. In a civilized society, you’re allowed to do what you want as long as you’re not hurting somebody else. I don’t open my mouth about something unless I’ve already thought it through. I’m not wrong about this. I’m willing to debate anyone about it. You’ll lose. I’m right, you’re wrong.”

“We’re not that kind of a band, a political stance type of a band. I believe in personal freedom. Real freedom. As far as using my music as a vehicle for that, nah, I prefer for the wildness to come out from my work as opposed to wasting that energy on senseless partying. I’m only speaking from myself of course. I’m not speaking for the band when I say that. It’s my opinion and my opinion only. I rarely ever talk at shows. I prefer to let the music do the talking.”

Buzz on His Wife, Blackie and Buster

“The other band members both have kids, which is nice. I don’t have kids. It’s just me my wife and the dogs. My wife and I work together all the time. It’s a great team. It’s an honor and a privilege to have her in my life. We’ve been married 25 years. We celebrated January 1st. We went on a dog-oriented vacation about three hours from the house. It’s a big deal to us.  It’s kind of nice. The dogs are brats. We have brats for dogs. We have Jack Russels. One’s a Jack Russel ones an American Hunt Terrier and kinda looks like a Jack Russel. All black. They are high-energy dogs. They kill rats. Impressive.”

“Dogs are a very important part of our lives. I believe dogs have a symbiotic relationship with us. Without them I think things would have been a lot different for humans. As soon as they domesticated dogs, they immediately had an alarm system against Grizzly bears and whatever else. Also as hunting partners, how much have we benefited as a result of that? People spend all kind of money on alarm systems and all that shit. Just buy a Doberman. Nobody is going to go in your house. They’ll go to another house without a dog, they don’t give a fuck about an alarm system. Dogs! Dogs! Dogs! If you were a burglar would you want to deal with a fuckin’ dog no matter what size it was? You cannot negotiate with them. They are going to go berserk. They’ll go to the house that doesn’t have them. Done and done. I love dogs. Dogs are a huge part of my life. My life is made better by having them there. You come home no matter what mood you’re in they’re always happy to see you. It’s probably the closest that human beings will ever get to massive unconditional love. They are in the moment. My wife says theyre ‘spiritual giants’. They know how to live in the moment. That’s a big deal. I don’t know how to do that, not the way they do.”

“It’s devastating when we’ve lost an animal. They give you so much it’s your job to see them through to the end. The day has come where their level of dignity of being alive is severely compromised and you have to set the date and prepare for it. It’s not easy. Its one of the worst things I’ve ever been through but you have to be strong for them. My wife did this thing that I thought was amazing with the first dog we ever had. It became obvious we were going to have to put him down. She refused to be upset in front of him. She didn’t want him to see her upset. So she waited. That’s right. That’s real love. She remained strong until he was gone. That’s what you do. Love them to death. To think about it in those terms was very advanced. I admired it. It was a wonderful thing. I learned a lot just from that one action. I wouldn’t have thought of it exactly like that. We had another Jack Russel that was 21 years old and we finally had to put her down. It was really tough. We’ve had four dogs we’ve had to put down. I have a way harder time with relatives. I have a much closer relationship to these dogs than with my relatives. And that’s OK. They’re our family. Everything we do is somehow associated with them. I can’t imagine life without them. They help get me centered and feel like an adult.”