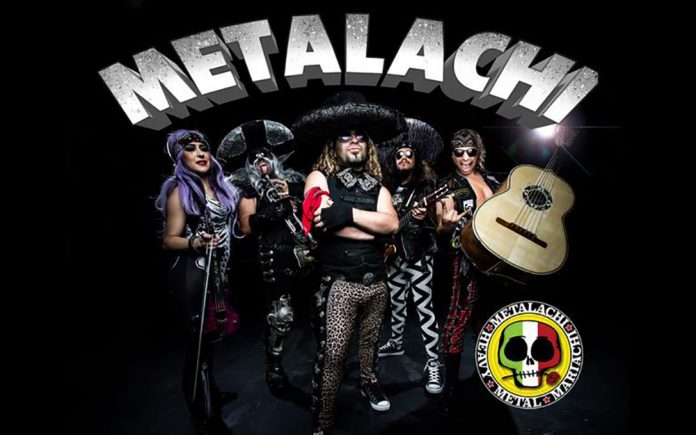 Headlining the Final Day of The 2019 Indio International Tamale Festival Sunday, December 8, 2019 at 3 p.m. on the Amigo Stage

The Coachella Valley chapter of Metalachi Nation will be in full assembly at 3 p.m. this Sunday at the Indio International Tamale Festival in Oldtown Indio. Performing at the annual event for the first time, Metalachi, The World’s First and Only Heavy Metal Mariachi Band, have been pillaging the desert since 2013 when they conquered The Hood Bar & Pizza and have ravaged a yearly residency at The Date Shed with their unique acoustic approach to Heavy Metal using time-honored mariachi instruments.

Festival gates open at 10 a.m. each day and admission is FREE! The event is located between Highway 111 and Indio Boulevard and fills-in Miles and Requa Avenues and Towne and Smurr Streets.

Coachella Valley Weekly spoke with Paco as he trained for the consumption of a ‘grande’ amount of tamales.

CVW: ¡Hola Paco! How was your Thanksgiving?

CVW: Is Metalachi ready for the Tamale Festival?

Paco: “We like to please the people and we like eating tamales. It’s a win-win situation. It’s never a bad time for tamales. It’s the original Mexican ‘Power Bar’!”

Paco: “Are you guys gonna have strawberry tamales? Those pink tamales look so gross but they are so good. Some of the best tamales I’ve had.”

CVW: For those who still don’t know, you are a Mariachi band who plays Metal.

Paco: “We all played Mariachi at some point in our lives. To us, Metal and Mariachi are similar in that they have a lot of similarities in the way the songs are structured and the intricacies of both styles tend to lend to each other nicely, it feels natural, because Metal and Rock are percussive like Mariachi. You have to hit the instruments to make it happen.”

CVW: Metalachi does a lot of press and are a promoting machine.

Paco: “It’s part of the job. You have to perform and you have to promote yourself. It’s also cool to reach out on different platforms to see what people think. It’s not hard to shoot the shit. For us, the reason we get to do this is because people come out to watch us perform. We want to get to know our audience, have a few drinks, sign a couple of ‘chichis’ and have fun!”

Paco: “It’s kinda cool because we start playing a song and I look out in the audience to see if people recognize the tune and once in a while I’ll see someone lose their shit and say, ‘Oh my God! They’re doing Slayer!’ or ‘Wow, that’s Guns N’ Roses!’ to me that’s pretty cool. Even though it’s a different style they recognize the tune being played, to me that’s fun. Growing up playing Mariachi and being a Metal Head, the merging of two of my favorite sounds of music. It’s a dream come true.”

CVW: The comedy aspect of your show is enough to keep people coming back.

Paco: “It’s kind of hard to take yourself serious when you’re wearing stretchy pants. It wouldn’t make sense if we’re standing up there in leopard pants and crotch-pumping and then talk about politics. It just comes natural to bullshit on stage and share some dick jokes.”

CVW: What is Metalachi looking forward to in 2020?

Paco: “At this point we’re just musical prostitutes. Wherever they want us, we’ll go. We just played Heavy Montreal in Canada with bands like Slayer, Anthrax and Quiet Riot. It was a crazy line-up. When I was a kid I would look up to all these bands. Holy shit! We’re on the same bill with Slayer! We had to step it up and really put out for this performance. We put a little extra Tapatio on our show to make it extra spicy. We just did our thing. We had fun. It was awesome to be in a different country and perform. It was our first time in Canada. I would also really like to go to South America and Russia, anywhere really. We’re shooting for the stars and furthering ourselves by pushing what we’re doing and trying to keep people having a good time. We can play a backyard somewhere or a huge venue, we come to entertain.”

CVW: The audience at the Tamale Festival is multi-generational. How does Metalachi approach different audiences?

Paco: “I think we appeal to all audiences because some of the older people are familiar with music from the 70’s, 80’s and 90’s, the type of music that we play and the little kids are gonna see us having fun on stage moving around and they can relate to it in that way. Some people see us and say, ‘What the hell is this?” and then they hear us and say, “What the hell is this?’ Ha ha! It’s a cool vibe. Everyone comes out to have fun. It’s a huge party and then tamales are involved too!”

CVW: What’s the difference between a daytime and nighttime Metalachi show?

Paco: “We have to ‘chub-up’ beforehand for the daytime show so all the ‘rucas’ can see our ‘huevos’ hanging out and we can be extra pendulant. Plus we can see more of the audience and have more time to interact.”

CVW: Can the Metalachi show get better?

CVW: Metalachi is going through some changes at the end of the year.

Paco: “We announced the departure of Vega and El Cucuy at the end of the year. It’s been an amazing 10 years with these amazing musicians and we can’t thank them enough for the contributions they made, the long trips, the late nights and in general, the heart and energy they put into help making Metalachi what it is today, they will be sorely missed. We wish them nothing but the best moving forward. People have to move on just like every other aspect of life sometimes. We have to move on and do other stuff. We’ll take a break for the holidays and look forward to hitting the road again in February 2020. This version of the group with the current players has been together two years. In total, we’ve been going for about ten years. I’ve been with the band for seven years.”

Metalachi have gone through several band member changes in its ten years but have maintained a focus on sending you home with a smile on your face. You are guaranteed to leave the Tamale Festival on Sunday stuffed with tamales and good times.