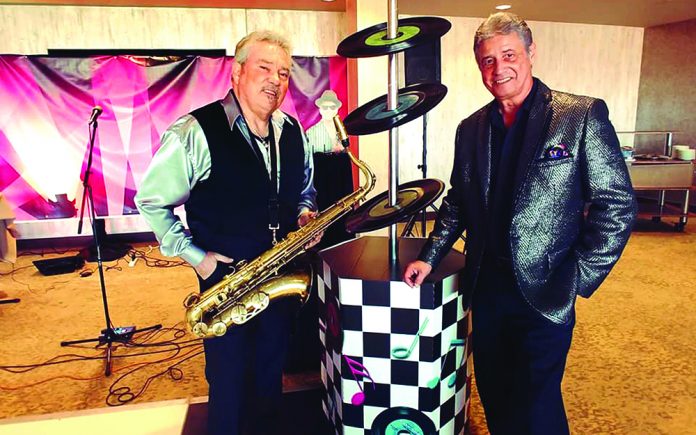 If you like Rock and Roll, Doo-wop, contemporary classics and Italian and Latin standards, then you will unquestionably love Michael D’Angelo and Jimmy Street at Chef George’s Picasso Lounge every Thursday, Friday and Saturday evening from 6:30 to 9:30 p.m.

As part of the line-up of entertainment at Chef George’s Hungarian Restaurant & Picasso Lounge, D’Angelo and Street are the “Big Apple” of the publics’ eye. The eatery is located at 40100 Washington Street, Suite #125 in Bermuda Dunes, California and is open Tuesday through Sunday 5 p.m. to 2 a.m.

Singing from New York to Los Angeles, D’Angelo is a “Native New Yorker” considered by many to be one of the most outstanding vocalists and entertainers to emerge from the area in years. As the lead singer for well-known L.A. band, Mestizo, D’Angelo opened for various Latin artists such as Tierra and percussionists Willie Bobo and Pancho Sanchez. He has also performed on the same bill as Los Angeles Rock band Los Lobos.

D’Angelo has in addition performed at every significant resort and live music venue across the desert and beyond. He is dedicated to advocating for local charities and supports causes such as City of Hope, Well In The Desert, and multiple veterans’ organizations. 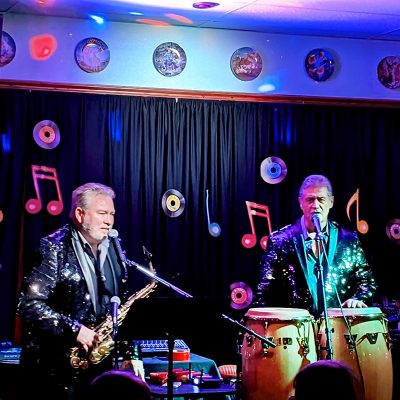 D’Angelo takes his audiences on a journey through time and an electrifying ride through various musical idioms. His body of work has built a dedicated following and fans agree, you cannot fully understand the essence of his art until you see him live belting out extraordinary melodies while captivating audiences with his dynamic energy.

His repertoire, “A Musical Journey Through Time,” is a blend of classic favorites from the 50’s, 60’s, 70’s Doo-wop, Old School, Italian and Latin rhythms.

His fans describe him best. Here are several quotes by those who have seen him perform: “In a world where fame and notoriety comes and goes, like the flavor of the month, D’Angelo is an enduring presence. He is fabulous!”

“When he sings “Unchained Melody” he brings the house down. We follow him wherever he goes.”

“Watching him perform, I felt like I was watching Tom Jones and Julio Iglesias all in one. What a great performer, his voice is so romantic. Wow!”

“Michael D’Angelo is the most complete entertainer I’ve seen in a long time. His timing and phrasing are reminiscent of Frank Sinatra and Tony Bennett.”

“An evening with Michael D’Angelo is entertainment for all ages. His range and versatility brings a musical experience to everyone present.”

As we have discovered, D’Angelo has made an impact on many a music fan and continues to take listeners through a journey in time with his unique brand of musicianship and entertainment. If somehow D’Angelo isn’t enough to draw us in, he has brought in saxman Jimmy Street to up the ante.

Jimmy Street is an incredibly talented and versatile musician, highly skilled on the saxophones, flute as well as vocals. Music fans marvel at his abilities but the answer is quite simple; many years of hard work studying under world-class L.A. teachers on vocals and saxophone and of course, practice, practice, practice!

Street started his professional career playing in the Navy Band in the late 60’s. Upon release, Street made his way to the West Coast, where he joined a Latin Jazz quartet in San Francisco, working with Phil Escovedo, uncle of Sheila E.

From there, he attended North Texas State University on a scholarship majoring in music. After attending NTSU, he made his way to the Southern California desert, where he worked several years with famed singer Frankie Randall. During Street’s tenure with Randall, he shared the stage with many show business luminaries like Lainie Kazan, Keely Smith, Don Adams (Get Smart), Dianne Reeves, Jack Jones and Danny Thomas, including one special night with the great Frank Sinatra. The band also appeared on The Regis Philbin Show.

From the desert Street wanted to go to L.A. and take a shot at stardom, which seemed like a good move but in hindsight he may have thought it through better. “Looking back, I can see I was foolish in leaving him. I had a good thing with Frankie as he was not only a great talent but a good band leader,” Street shared.

Street is also a charter member of the band The Hodads who have performed all over the United States and as far as Asia. The band served as the house band for several major Beverly Hills fundraisers for organizations such as the Muscular Dystrophy Association where they shared the stage with luminaries such as Jerry Lewis, Casey Kasem and Patti LaBelle.

In 2012 Street was asked to partner up with Randy Heddon to form the Randy Heddon Quartet to perform on the Princess Cruise lines. For over five years Street sailed the seven seas performing shows for pleased passengers. The band soon became known as the top band in the fleet and was part of earning Best Cruise Ships for Entertainment two years in a row by Cruise Critic and was given the honor of being the entertainment for Princess Cruise’s latest ship, Majestic Princess, for it’s maiden voyage from Italy. It was during his tenure on Princess Cruises that he met a passenger who is now the love of his life, Eileen Mayo, who you can also find socializing and singing at Chef George’s.

The combination of D’Angelo and Street is remarkable. The desert may be unaware as to the level of quality these musicians represent. We are humbled that D’Angelo and Street consider the Coachella Valley home. Street explains, “I like it here, especially at Chef George’s, where the stress of living in L.A. is gone and the people are friendly and love music. Some of our favorite songs are from the 50’s 60’s and 70’s but we also like more contemporary songs like “Cake by the Ocean” and “Uptown Funk!”