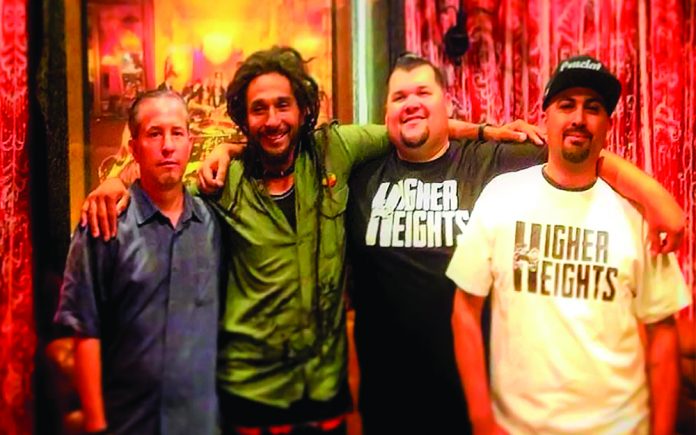 If you were to quantify the resilience of the desert music community, you would likely need several yard sticks to first measure the Reggae band Higher Heights.

Higher Heights began in the summer of 2007 right after ‘Miguel’ aka Mike Fernandez wrote his first song, “Bright Day,” accompanied by a melodic musical arraignment. The excitement of the new song led to newly inspired material. Soon after, Fernandez’ son Adrian wrote his first song, “You and Me,” to add to the then growing list of over 25 original songs.

Now, many more songs later, Higher Heights will be celebrating the completion and release of their EP Desert Dread with a live performance from the band and special guests RAZTECALII on Saturday, March 7, 2020 at 9 p.m. at The Hood Bar and Pizza at 74-360 Highway 111 in Palm Desert, California. The show is free and 21+.

The Desert Dread EP was recorded and produced by Mike Rizzio of Desert View Records. All music was written by Mike Fernandez with artwork by Higher Heights drummer Ryan Alexander Diaz (Crucial Culture, Unity Frenzy). The EP also contains a performance by the younger Fernandez. 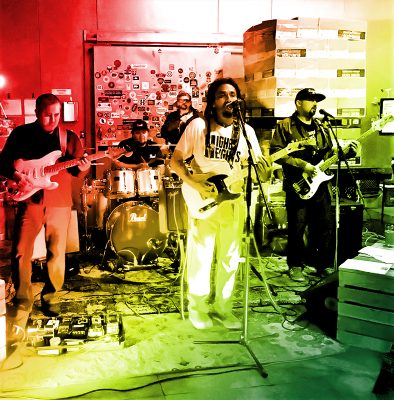 Turning back, eight years after the first song was written, Higher Heights remained under the radar, writing and perfecting their sound. As for the elder Fernandez, he was building the confidence necessary to ready himself mentally and musically to step into the music scene.

Fast forward to 2013, an old friend, Quintero, of Cathedral City, CA came out to visit and jam. Quintero’s instrument of choice is the guitar but Higher Heights needed a bassist so Quintero stepped up to the plate. Today he is the backbone of Higher Heights’ music.

Now with four members, in 2014 Higher Heights stepped out onto the desert music scene in a big way. Their first-ever performance was organized by Desert Music, Coachella Valley Weekly and Ronnie King at Schmidy’s Tavern in Palm Desert, CA. They brought down the house at the first Reggae Residency show performing with moZaiq and The Mikey Reyes Acoustic Movement. In addition, the band has been a part of the all-ages Synergy Music & Arts Festival since 2014 when they were invited to play for the first time by Culturas Music and Arts.

Their first recorded single, “Indian on the Mountain,” was recorded by multi-platinum record producer, King. King described Fernandez as a “songwriter first”. This is what intrigued King when he was approached with the possibility of working with Higher Heights and Fernandez.

On his collaboration with King, Fernandez found a fellow forward-looking counterpart.  “I was surfing local artists on their pages and I saw Ronnie was working with one of them in his studio. I became interested in knowing more about Mr. King. While I was in church my pastor and very good friend Angel Santillanes asked me about my music and I said I was looking for a producer. I mentioned that I wanted to see about contacting Ronnie. Then he said, ‘Ronnie King? I know Ronnie he’s a good friend of mine.’ That night my wife, Mercedes, attempted to contact Ronnie. He responded and we set up a date to meet at Chateau Relaxo, King’s music studio in Thermal, CA. The rest is history. Mr. King is a very uplifting and positive person.”

The story behind Higher Heights corresponds with that of Reggae music in general. Fernandez explains, “Higher Heights represents a higher state of consciousness and understanding. In general, Higher Heights is a universal expression, and other form of nirvana, sublime; it’s peace.” This description allowed their fans to remain unprejudiced to the music and where it is acquired from.

Fernandez is influenced by two of the greats. “Bob Marley and Pete Seeger are two of my primary influences. The music that has left an impact in my life comes from the music writers who record thoughts from their heart, in a fullness with no profanity. The music must be positive with a ‘good vibe’ feel to it.” Fernandez sees Higher Heights continuing to aim for elevated summits. “Higher Heights will keep moving forward with the Desert Reggae movement. My band and I are very excited. Our musical work will speak for itself. We are hoping our music finds a place in the hearts of the listeners. Our mission is to continue to create positive and uplifting music that gives people peace and joy.”

The band also has two singles available online, one recorded and produced by King, Indian on the Mountain and Bright Day produced by Rizzio.

In Reggae the music is the messenger. In this song, the title alone tells you that Fernandez won’t take it anymore. Fernandez is a soldier and he and his music are tools for change. There’s a Gregorian Chant-feel that is woven here. “There’s something about me that you don’t know…You will see…I got a joyful meditation in my soul and like a little bird, I got to let it go…You can’t keep a good man down, no matter how hard you try”.  Fernandez’ attempt to raise the consciousness of his audience is apparent here.

“I’m a musical rebel on a different level”. Tempo break that introduces fantastic guitar work and extended solo. The song is reminiscent of a 70’s jam and brings to mind the Santana set at Woodstock. The recording feels vintage 60’s and is glorified with a fine and melodic guitar tone.