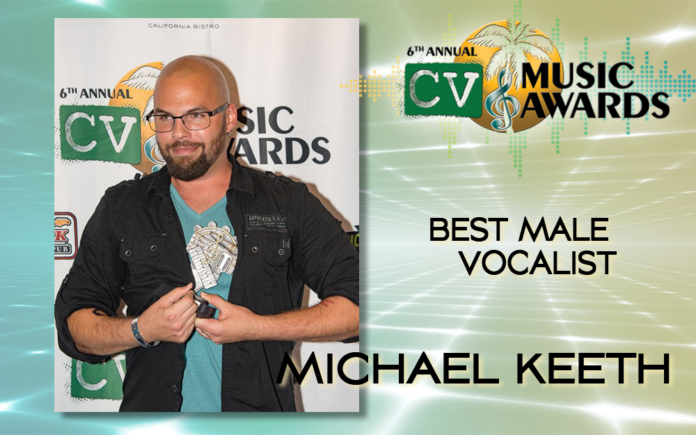 Michael Keeth has been wowing fans since his high school days when he was in the hard rock band Phallus. That was followed by a brief stint as frontman for House of Broken Promises. Keeth made a decision to go solo and record his debut CD, Shed the Skin, back in 2012 and he now is referred to as “the voice” because of his soulful, sultry chops. Not only does Keeth have a successful solo career as a fulltime working musician, but he also fronts the hard rock band Death In Pretty Wrapping, that formed over a year ago with band mates Arthur Seay, Mike Cancino and Derek Wade Timmons. Keeth recently won Best Male Vocalist at the CV Music Awards for the 5th year in a row.

Being a prolific songwriter and amazing performer isn’t the only thing keeping him busy; he’s also a proud husband and father of two with another baby girl on the way. Much respected by all his peers, you might say that Michael Keeth is living the dream.

Keeth took time out to answer questions for our Local Musicians Spotlight.

CVW: Tell us how you felt about winning the Best Male Vocalist Award again? Does it still mean as much after winning 5 years in a row?

MK: “It feels Amazing.  I’m honored and humbled to be in the company of such awesome musicians; and to have the support of our wonderful community.”

CVW: You perform solo, and also with Martin Barrera and Josh Fimbres, and for the last year in Death & Pretty Wrapping. Tell us how each of those is different from the other and what it means to you to work with these musicians.

MK:  “Each configuration is gratifying in its own way.   The multi-talented Joshua Fimbres makes a djembe sound like a 15 piece drum circle.  We feed off of each other’s stage energy, and our performances are crazy fun.   Martin Barrera is a great guitarist and can play along with anything, while bringing his dark Latin magic to the vibe.  Death in Pretty Wrapping is a tornado of rock. Guitar legend, Arthur Seay shreds like no other, Derek Timmons is a thunder wielding lumberjack of doom, and Mike Cancino makes Lars Ulrich sound like a kitten slapping sponges.  So it’s fun to be a part of that.” (said smiling)

CVW: You’re a true working musician that doesn’t need to have a day job and you’re able to support a family. When did you decide that was how it was going to be? Has it been scary or liberating for you?

MK: “I’ve always wanted to play music full time, and I’ve been very lucky to be afforded the opportunities to play in so many great venues.  It’s both scary and liberating at times, because there’s no guarantee in long term gigs.  It’s a constant effort to book new shows, make and preserve good relationships, and strive to improve in my writing and performance.   I only have control over what I do.  I try to always say yes to bookings, be on time, and play my best.”

CVW: How excited are you to have another baby on the way?

MK: “SUPER EXCITED!!! We’re having another girl. (Insert big smile here) We already have our 8 1/2 year old daughter Quinn, and 2 1/2 year old son Mikey.  They’re our whole world and our 3rd will be just as awesome, I’m sure.”

MK: “The CVMA performance with Josh Fimbres was awesome!!  Really, they’re all fun.  Every chance I get to play out is a gift.”

MK:  “I have hundreds of verse, chorus, and full songs’ lyrics in my phone notes, and in random notebooks.  I’ll jam out different chord progressions and when I find something I like, I’ll pull up the lyrics, and see how they fit with the music.  It’s not an exact science.”

MK:  “Several! The Hood, The Riviera Hotel, The Omni Rancho Las Palmas, Corktree, Hotel Paseo, and I have a new gig starting on Sunday nights at ACQUA at the River in Rancho Mirage!  They have a great setup with a cool vibe!”

MK:  “Winning the CV Music awards has been great.  I love you guys.”

CVW: (We love you too Michael!)

MK: “If you love music- do the work to write or perform, and get to play out- you’re successful.”

MK: “APC, old school Marilyn Manson, Smashing Pumpkins, U2, Gregory Alan Isakov……I’m all over the board.”

MK: “I want to record a song with Josh Heinz, and also with Dougie Van Zant.”

MK: “U2, Eagles, and I’d love for Death in Pretty Wrapping to open for Sevendust.”

MK: “People who stay grateful, and help each other up.”

MK: “I think if you’re in it to get rich, it’s very hard, because the money isn’t flowing like it did in the 80’s and 90’s.  But the streaming apps give us a platform to reach audiences all over the world.  If you’re willing to work hard to write and perform- you can make living doing what you love.”

CVW: How do you feel the CV Music scene has changed over the last 10-15 years?

MK: “Everyone’s a lot more supportive of each other now.  There’s a family vibe that runs through the various ages and genres of the scene, and it’s beautiful.”

CVW: Are you working on new solo music? And when can we expect a Death in Pretty Wrapping CD?

For more info and to hear his music go to: www.michaelkeethmusic.com