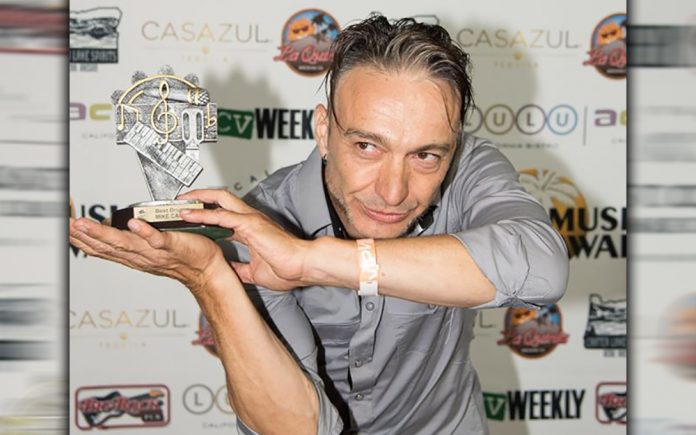 Mike Cancino has a drumstick in every pot imaginable. As drummer for House of Broken Promises and Unida, Cancino has toured the world and brought the deserved attention to himself, his family and community.

In 2018, he and his multi-generational family of musicians received the CVMA Pioneer Award.

At eight years old he was taught how to play drums by his eldest brother Benny. At ten years old Cancino was asked by his stepfather Hilario if he wanted to play drums or guitar. Cancino had recently listened to Rush’s Moving Pictures and fittingly chose the drums. His stepfather promptly purchased him a four-piece Ludwig drum kit at Dean’s Music in Indio. Cancino listened and played along to music from AC/DC to Billy Squier. He subsequently met HOBP and Unida guitarist Arthur Seay at Westside Elementary School in Thermal, CA. He also gives his brother Chad significant credit and points to him for perpetual inspiration.

He then played marching quads and snare drum in the Indio High School drum line. He was also involved in symphonic and concert bands. He and the drum line were one of the first lines to implement a full drum set into a show.

On Winning the CVMA for Best Drummer

“It’s fun to win it. I was so excited, I fucked up my acceptance speech. I forgot everybody. I always thank Phil Lacombe and Tracy Dietlin. I’ve known them for over 20 years because of the scene out here. Thanks to everybody who went online and took the time. If I didn’t disappear already, I’m not sure I’m going to disappear at this point. I had this conversation with Arthur about ten years ago. At that time we were about 65 haha, at that time we said, ’We haven’t stopped, so at this point, I don’t know who’s stopping us.’ It’s such struggle because we’ve never been part of the ‘cool kids club.’ We practice hard to be good. There was a purpose for us, lazy didn’t exist. Easy practice and no etiquette didn’t exist. It was ingrained in us to practice our asses off. I took that from being in school bands.”

On House Of Broken Promises

“We have a bunch of music and video stuff that will be released in the near future. We’re finishing mixing and mastering songs and editing videos. Everything is in its final process. Hopefully we can have everything out by next summer because we’re going to have all kinds of good things coming out. Once it gets rolling, HOBP is on a great trajectory. Joe Mora (vocals/bass) really kicked ass with his lyrics and direction. It refined us. Arthur Seay (guitar) did a killer job recording us. Everything was stepped up.”

On the Return of Unida

“Yeah, that’s going to be coming up next summer for me and Arthur, some HOBP and Unida stuff in Europe. There’s going to be a tribute to the legacy of Unida. It’s been too long. It’s peaking now too. I’m looking forward to getting out and playing all those tunes for more than just once. We’re going to hit it hard. We’re going to go out big on this one. We’re going to plan for this to finally be released. The point of it is to have the record out. The record we recorded will not get released unless this band is busy doing something. The record label will not waste their time on you. We are going to get our asses out and support it. Playing it live is a different kind of energy than when we recorded it. It’s a medium steady. Arthur and I have compared it to when we have gone out to play in HOBP on past European tours opening for Unida. HOBP goes out there with a super-high performance and big ending. Then Unida goes out there and it’s like a welterweight champion fight, it’s just ‘boom, boom, boom’ with the stamina and the energy of it, it’s a little different.”

“Earlier this year we played a festival called Shredfest in Pennsylvania. It had been six years since we played together. I found out, our singer, Mark Boals (Yngwie Malmsteen), performs in his church choir too! Dave Bates (Edge of Paradise) is the guitarist, he’s an old friend Bjorn Englen (Yngwie, Dio Disciples), we have plans on getting together again and getting a whole new set list together. We have new songs in the chamber that we haven’t released. We have a whole new album. Bjorn and I jammed out just the other day. That’s how we write.”

On Death In Pretty Wrapping

“Michael Keeth (vocals), Derek Wade Timmons (bass), Arthur and I have new material to be released. We’ll have a release party for the four-song self-titled EP. We have a lyric video that has yet to be released also. You can find the EP on cdbaby. You can also purchase physical copies at our shows.”

“I play with my brothers in their cover band and I have been for around three years. It’s been one of the best experiences. The highest highs and the lowest lows, I love it. Sometimes it’s heavenly and sometimes it’s ‘are we done yet’? I love playing with my brothers because it’s schooled me further in ways that I could never think of. I grew up watching my brothers since I was eight. I remember telling myself, ‘I think I can do this.’ It was fucking rad growing up with them going from Los Cancinos to Invacion to Mr. Moto and getting their record deal. I was always there watching them practice but never was I in those bands. I really nailed down how to play cumbias and rancheras.”

“I’ve been playing with Randy Caserta (vocals/guitar) and Rob Pickett (bass) since 2004. They just came over to jam out with me at my house to play covers for fun then they took me out to the clubs with them. It’s been fun.”

“The contemporary ensemble is a small group of volunteer musicians and vocalists. I have gone the last 3-4 years to Sacred Heart Church in Palm Desert. There’s a really cool vocal and piano duo and they do the whole mass and it’s really bluesy. By the time they get to the closer they’re laying it down. You would think you’re listening to Aretha Franklin at a Baptist church. I went over a couple of times after they brought the house down to congratulate them. They finally said, ‘what’s going on?’. Who’s this guy?’

They asked me if I played. I said I played a little haha. This was a year ago. They were starting an ensemble so I auditioned. It was just like being back in school band, just watch the director. I watched his right hand, that’s the tempo, I see him tapping his toe and I stick with him. He told me I had impeccable tempo. I played the whole season from November to June. I really got creative. It’s your traditional song list that I got to put drums to. I just put a drum beat to every song and they wanted to cater to the younger crowd. It’s been cool to blend in with this entire choir and stay in context with the music. It feels cool to accomplish something on the softer lighter side and get creative in a new setting. I’m back for my second season now.”

On Staying In Shape

“I eat a lot of pizza and double-cheeseburgers! Make sure you exercise and try not to be a couch potato because it’s not good for anyone. On any instrument it’s cool if you’re in shape. It’s good to practice. I think if you do anything for a long time and your body can’t hang you’re gonna get tired. There’s ‘live playing shape’ and there’s ‘not live playing shape’. Drink your water and eat your bananas.”

On His Drums and Gear