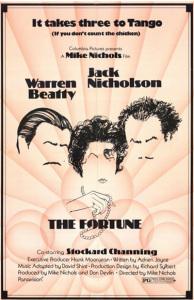 When Mike Nichols died last month at 83, there was an outpouring of deserved accolades for the acclaimed performer and director of films and plays (he won nine Tonys). The river of tributes always mentions, at the very least, 1967’s THE GRADUATE (for which he won a Best Director Oscar©), WHO’S AFRAID OF VIRGINIA WOLF (1966) and the 2012 reboot on Broadway of Arthur Miller’s “THE DEATH OF A SALESMAN.” No question, he had a golden touch and his work on stage and screen was among the best of the last 50 years.

Nichols first gained attention as half of the sensational, farcical comic duo with partner Elaine May. Sitting on stools on a bare stage, their sly, often improvised, witty wordplay revealed a sophisticated awareness of the human condition — especially as it pertained to the battle of the sexes.

That rarified wit was also present in Nichols’ forgotten, manic, slapstick THE FORTUNE (1975). Nichols had directed two expensive films (CATCH-22 and DAY OF THE DOLPHIN) that received mixed reviews and he wanted a hit. 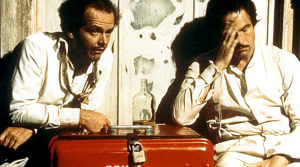 Carol Eastman, the screenwriter of FIVE EASY PIECES, wrote the jazz era farce under the pen name Adrian Joyce. But this dark, manic comedy is a not just a slapstick homage to the screwball comedies of the thirties but more a hybrid Laurel and Hardy riff on steroids.

Jack Nicholson is Oscar Sullivan and Warren Beatty is Nicky Wilson – both inept con men. They have an insane plan to relieve madcap flapper heiress Fredericka Quintessa Bigard – a wonderful Stockard Channing in her first film role – of her fortune. 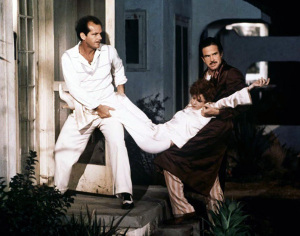 It’s strange that this mostly unseen, but maligned film from Nichols is often put in the same category as former comedic partner May’s equally unseen but wildly funny ISHTAR that got dissed before release based only on articles about it’s massive budget overruns.

I was working in Hollywood when this film was made and I heard many stories about events that were said to impact production. Nichol’s wanted Bette Midler for the lead but a perceived insult from Midler changed that and 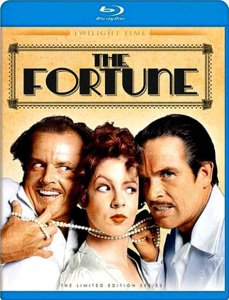 the unknown Channing was given the female lead. Also, around this time, an article revealed that Nicholson’s sister was his mother. A fact he did not know. Strong emotions from all the principals, both personal and professional were and are apparently attached to this project that deserves to be seen for the wonderfully wacky film that it is.

Nicholson never mentions this film in interviews nor can it be found in his published authorized biographical material. THE FORTUNE barely received a theatrical release and was never officially distributed in the home video market. Director Nichols did not direct another movie for almost a decade. Sometimes, the weird vagaries of the public’s fickle affection cannot be parsed.

But wait. Breaking news! The demand from the cult of vocal fans, including the Coen brothers, has miraculously made this forgotten gem available this week in a Blu-ray transfer from Turner Classic Movies (shop.tcm.com). Sadly, no commentary from Nicholson and Beatty. 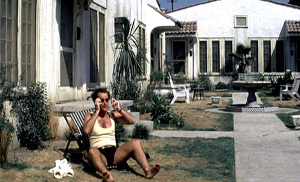 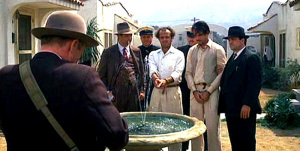