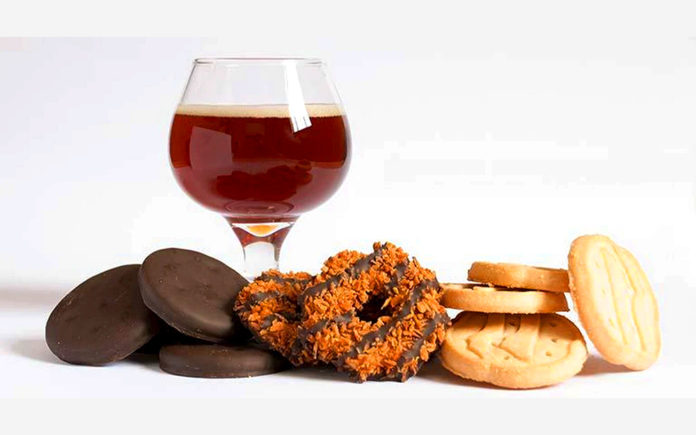 Craft beer dinners are a great way for gastronomes to enjoy the ways that a fine beer can compliment and contrast the flavors of a savory gourmet meal, but those who like to keep things on the sweeter side can rejoice in the fact that Girl Scout and craft beer pairing festivals are now a thing. The combination of the two treats may seem like a novelty concept, but it’s been a novelty practiced widely among lovers of both Samoas and stouts for several years now, with enough fans of the pairing to finally warrant its own official event.

The Girl Scouts of the United States of America have been selling cookies as a fundraiser since 1917, with cookie season running from January through April of each year. Up to 28 varieties of Girl Scout cookies are offered, although some of them may go by different names depending on the region and what company bakes them. Revenue from sales have traditionally been used to pay for events and activities, maintenance of Girl Scout Camps, cookie sale incentives, and Council administrative costs.

Ever entrepreneurial, the GS of USA have officially sanctioned the country’s first Cookie and Beer pairing festival happening in Indianapolis, IN on January 24th, 2019. Field Brewing is one of the breweries scheduled to have their beers paired with Girl Scout cookies at the event. Tasting notes from the company read, “Cocoa nibs, vanilla bean, and mint sprigs flavor Field’s choco-mint stout, a natural with Thin Mints. With peanut butter and jelly sandwiches in mind, Field beer-makers partner a mixed-berry-infused pilsner with peanut butter, chocolate and shortbread Tagalongs. The delicate sweetness of the fresh berries contrasts the subtle saltiness of the peanut butter cookie, while the crispness of the pilsner cuts through the chocolate.”

The Indianapolis Cookie and Beer pairing festival looks to be the first of many to pop-up throughout the 2019 season. If you’re curious about attending an event, Saturday, March 9th will be the day Southern California residents get their turn as REV Winery and Brewing Company in Covina will be hosting a Girl Scout Cookies and Beer pairing. Tickets are $20 and can be bought through Eventbrite.com

While pairing Girl Scout cookies and craft beer shows a healthy love for good beer, a Texas man took his love of suds a little too far and is now in jail because of it.

On January 16th, a Williamson County, TX man left his 4-year-old son home alone while he went to buy beer at a convenience store, according to an arrest affidavit.

An on-duty deputy noticed a vehicle driving at night with its headlights off, prompting the officer to pull the vehicle over. According to police reports, the officer stated that the driver’s speech was slow and slurred, and his breath smelled like alcohol. The 42-year old driver told the deputy that he was simply on his way back home from a convenience store, where he has stopped to buy two tall-boy cans of Hurricane malt liquor and needed to get back home to his 4-year old son. A field sobriety test was conducted, and the man was arrested and charged with driving while intoxicated. Two other deputies went to the man’s residence, where they found his son home alone. He is now being charged with child abandonment as well.

While beer (well, malt liquor anyway) may cost that gentleman a little bit of time in the pokey, a Vietnam man may very well owe his life to beer.

On December 25th, 2018, a 48-year old male from the Vietnamese province of Quang Tri was hospitalized with a lethal amount of methanol in his system, more than 1,000 times over the recommended limit, and doctors were able to save his life by pumping 15 cans worth of beer into his body.

Methanol is the type of alcohol found in gasoline, paint thinner and antifreeze, but it can also be found in homemade liquor. It’s very harmful to your body, as it is extremely toxic and difficult for your liver to process. Thankfully, the body has a preference to digest ethanol (the kind of alcohol found in beer, wine and spirits) over methanol, so doctors transfused a total of 15 beers into the man’s body at the rate of one beer per hour, buying themselves enough time to perform dialysis, cleanse his body of methanol, and discharge him about three weeks later (last week).