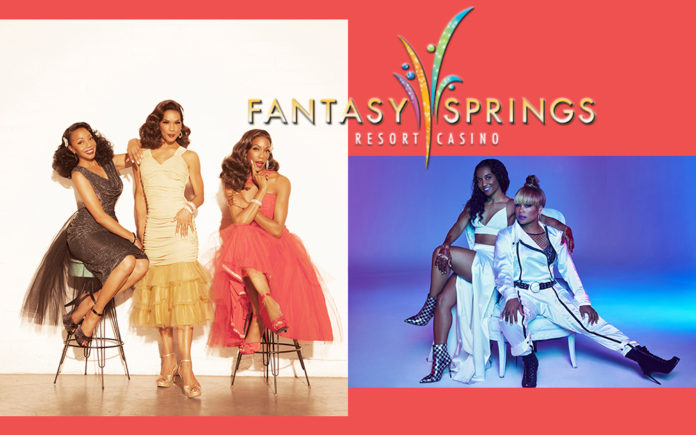 TLC is the undisputed best-selling American girl-group of all time, and they’re teaming up with En Vogue, one of the top five best-selling American female music groups in history, to bring their fans one night of incredible music at The Special Events Center at Fantasy Springs Resort Casino on Saturday, September 15, 2018.

One of the greatest legacies in music history can be summed up by just three letters—TLC. Those characters merely hint at the talent of Tionne “T-Boz” Watkins, Rozonda “Chilli” Thomas, and the late Lisa “Left Eye” Lopes, but they immediately evoke an unparalleled journey nonetheless. That journey encompasses immortal anthems such as “Waterfalls,” “Creep,” “No Scrubs,” and “Unpretty,” to name a few, as well as sales of 70 million records worldwide, four GRAMMY Awards, two Diamond-selling albums among a total of four multiplatinum albums, ten Top 10 singles, and four Number 1 singles. Meanwhile, the VH1 original film CrazySexyCool: The TLC Story chronicled their rise and broke records as the highest-rated television film premiere of 2013 and the highest-rated original premiere on the network between consistent touring.

TLC has now released their first album in 15 years, titled simply TLC. “We’re still TLC,” affirms Tionne. “If it’s not broke, don’t fix it. We kept the same recipe, which is strong lyrical content and talking about things that affect all of us. When you have time between albums, you have more to speak on. We talked about what was on our minds and hearts.”

En Vogue, with current members Cindy Herron-Braggs, Terry Ellis and Rhona Bennett is recognized as one of the top 5 highest selling American female music groups in history, En Vogue has sold over 20 million albums to date. Their effortless transition into the digital age, complemented by their effortless chic, has garnered the group over 30 million streams and 26 million plus YouTube views on their Top 6 hit smashes such as “Hold On”, “Free Your Mind”, “Never Gonna Get It”, “Giving Him Something He Can Feel”, “Don’t Let Go” and “Whatta Man” (feat. Salt N Pepa).

In March of this year, En Vogue released their first album since 2004, Electric Café, which presents their most diverse work yet. The first single “Rocket” pushed its way onto radio playlists across the country and solidified En Vogue’s legacy well into the new millennium.