Imagine an instrument that gives you access to virtually limitless possibilities for musical expression. Imagine it combines your favorite elements of guitar, bass, keyboards and drums- all in one. Imagine it’s electric- wired for stereo output so you can use any combination of effects, amplifiers, even a guitar synthesizer or absolutely none at all. Well, there’s no need to imagine it- it already exists today and is celebrating its 40th birthday this year.

Known as The Chapman Stick®, it was invented right here in Southern California by visionary musician Emmett Chapman in 1974. The still relatively little-known stringed instrument, sometimes simply called “The Stick”, is one of only three instruments ever invented in the United States and has been displayed in both The Smithsonian Institute in D.C. and the Musical Instrument Museum in Phoenix. So far, approximately 7000 of these instruments have been made by Chapman in his Woodland Hills, CA home and they have been shipped to players worldwide.

Chapman wanted to play complex harmonies like a jazz pianist does but with the expressive dynamics of a rock guitarist- all at the same time! To do so, he developed a revolutionary two-handed tapping technique on modified guitars in the late 60’s but was not satisfied with how they performed. As a result, he pioneered a radical new stringed instrument specifically designed to accommodate his new playing technique. Thus, “The Stick” was born. Played with both hands at the same time- more like a piano than a guitar, The Stick enables musicians to create multi-part arrangements with both hands simultaneously. Herbie Hancock meets Jimi Hendrix- all on one instrument!

The Stick has a pleasant, distinctive tone all it’s own and can be used in almost any type of music imaginable. In the early 80’s it was used mostly as a bass instrument by progressive rock artists like Peter Gabriel, Pink Floyd and King Crimson but was never truly introduced in a meaningful way to the general public. However, since then, independent artists and players around the world have mastered classical, jazz, rock and many other styles using The Stick. The versatile instrument is optimized specifically for a two-handed pianistic playing technique which makes for a powerful musical combination.

Available with either 10 or 12 strings, The Stick is played by lightly tapping the strings to the frets- causing just enough vibration and sound energy to be heard by a sensitive pickup. The sound is then sent in stereo to one or more amplifiers. Half of the strings are called melody strings (in the guitar range) and are usually played using the right hand. The other half of the strings are in the bass range and normally played using the left hand. The instrument’s classic tuning of fourths in the melody and fifths in the bass allows for a mirror-like relationship between both hands. Transposing scales or chords can be much easier than on guitar because of the perfect intervals- allowing the player to make big poly chords using both hands, much like a keyboardist does. To make it sound even more dramatic: add the expressive qualities of a stringed instrument- like vibratos, bends, slides and percussive tapping.

Although The Stick is an electric instrument, the player is treated to the same intimacy and feel that a classical guitarist enjoys, while at the same time has the chordal and melodic capabilities a pianist uses. Fingers directly engaging the strings, using both hands, allows the freedom to create never before heard compositions while adding expression over a range that covers almost 6 octaves. A pretty full musical palette for an instrument that weighs less than some electric guitars.

Back in 1976, I had the good fortune to meet inventor Emmett Chapman at UC Riverside at a concert he gave at The Barn coffeehouse. Out back after the show, he let me try his unusual new instrument and I was immediately hooked! Shortly thereafter, I purchased one of his earliest instruments and took lessons with him off and on for over ten years. Since then, The Stick has been an enduring, lifelong passion and I’ve been fortunate to have introduced many people to the instrument at countless venues over the years. I’ve recently relocated to the Coachella Valley and I hope to continue spreading the music and knowledge of this amazing example of American ingenuity.

Michael Kollwitz is a Chapman Stick musical artist based in Rancho Mirage.
He can be reached at www.MichaelKollwitz.com or (775) 220-9866. 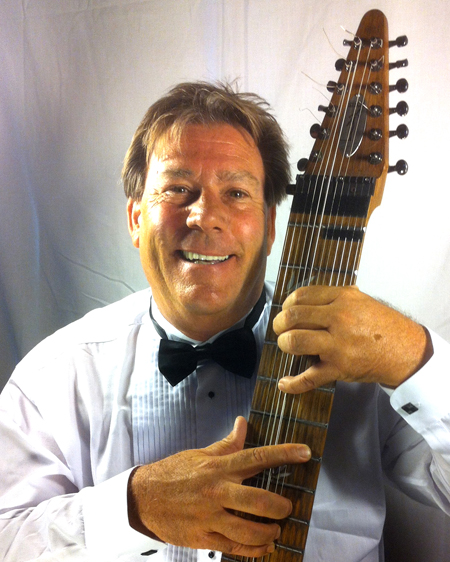