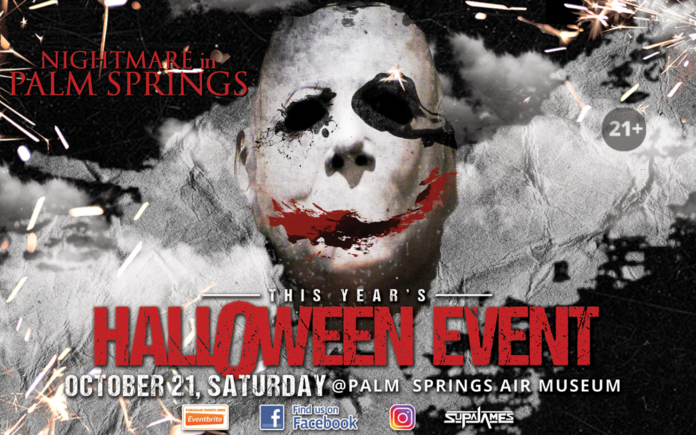 A new Halloween event is coming to the Coachella Valley on Saturday, October 21 at the Palm Springs Air Museum. “Nightmare in Palm Springs,” hosted by Robert Acosta & Associates, is a  party first and foremost, featuring DJ SupaJames and two full bars. However, in the spirit of Halloween, Acosta’s event will include surprise features such as a Nightmare on Elm Street theme, to make this party spookier than similar events,

“I don’t want to give away too much… but basically it’s going to be a Halloween party,” Acosta says. “I really like Halloween… love the holiday a lot and I’ve got to over the years, since I grew up here… see a lot of the Halloween events… I decided that they weren’t offering necessarily what I wanted and what… some of the people would really want in the Coachella Valley. So I decided to do a little bit different take on it. This Halloween event is going to be a lot more Halloween themed.”

Though Acosta doesn’t want to give away too many details before the event so that guests will be surprised and spooked, he says, “We’re trying to take a different spin on a Halloween party. We wanted to make sure that the event was built around Halloween. When you come to the event, you’re going to be scared a little bit. We’re trying to get that little bit of… you know, your heart racing, having a good time.” Overall, he says, “We want people to dress up and just be prepared to drink, dance, and scream.”

Along with the efforts to make the content of the event unique, Acosta wanted the venue to be unique as well. “We chose Palm Springs Air Museum because we think it’s a great location. I’ve been to events at the air museum before, always had a terrific time and to my recollection, I don’t think anyone’s ever done a Halloween event there and we thought that we could get a good crowd there… the event’s going to be inside an airplane hangar,” Acosta says.

Though Acosta wanted to create an event that fulfilled a need for a party more focused on Halloween, he didn’t want his event to come across as competition for the longstanding traditions that people might already have. “The reason why we chose October 21, we didn’t want to do the weekend of Halloween, because I’ve been to BB’s parties for years, I went to Terrorfest last year, I think they do great events and we didn’t want to necessarily compete against them. They stand on their own really really well. So we decided to do it a little bit earlier because we think that Halloween is a month where everybody wants to go out and do something. It’s like one of those months where parents want to take their little kids out trick or treating, they want to pick out Halloween costumes for their kids, adults want to go to their friend’s house for a Halloween party… something’s always going on with your friends, with your family, with your kids, with the school. So we decided… instead of doing it the weekend of Halloween where there are so many events going on, let’s offer something to the general public a week before… more opportunity for people to enjoy the wonderful month of Halloween,” Acosta says. “We encourage everyone to still go to Terrorfest and BB’s party…those are great events.”

The organizers of this event, Robert Acosta & Associates, are the same ones who organized the Halloween Carnival at the La Quinta Park in 2015 and at the Westfield Mall last year. “Both of those events were fantastic events. They raised a lot of money for charity, over $15,000… from those two events.” The money went to organizations such as the Soccer League, Palm Desert Middle School, and the Desi Strong Foundation. “They were smaller events but they were family themed. We gave out candy; there were carnival rides and carnival games.” Over the years, the company has donated over a million dollars to different charities and this year’s Halloween event will donate some of the proceeds to the Desi Strong Foundation “They’re the charity that I selected a few years ago that no matter what event I do here in the desert… I’m always going to include them and donate money. They’re not going to be working the event or anything like that but they’re going to benefit financially from this event… it means a lot that we’re going to be able to give back to them. They’re a great local Coachella Valley charity,” Acosta says.

The company has been in business for four decades, according to Acosta. “My dad was recruited by Coors beer to work for the brewery in Golden, Colorado. His sole job for two decades was to put on large outdoor special events and his one thing that he was supposed to be doing was promote Coors beer. So over the years… my dad’s done everything… huge fireworks shows, huge parades, big music festivals… nobody has done a bigger Hispanic festival in the western United States.” The next event that they are planning in the desert is a fireworks show and beer festival and they’re hoping to schedule it for May of 2018. Most of the events that the company has put on have been in Orange County or Los Angeles. “I’ve been telling my dad since I was a little kid, do an event out in the desert,” Acosta says. It wasn’t until they began hosting Halloween carnivals two years ago that they realized that their events here would be successful.